I was given a sample, that it is supposed to be a medium thickness Rhodium on top of an infinite silicon waffer. The experimental RBS spectrum along with the simulation looks like that 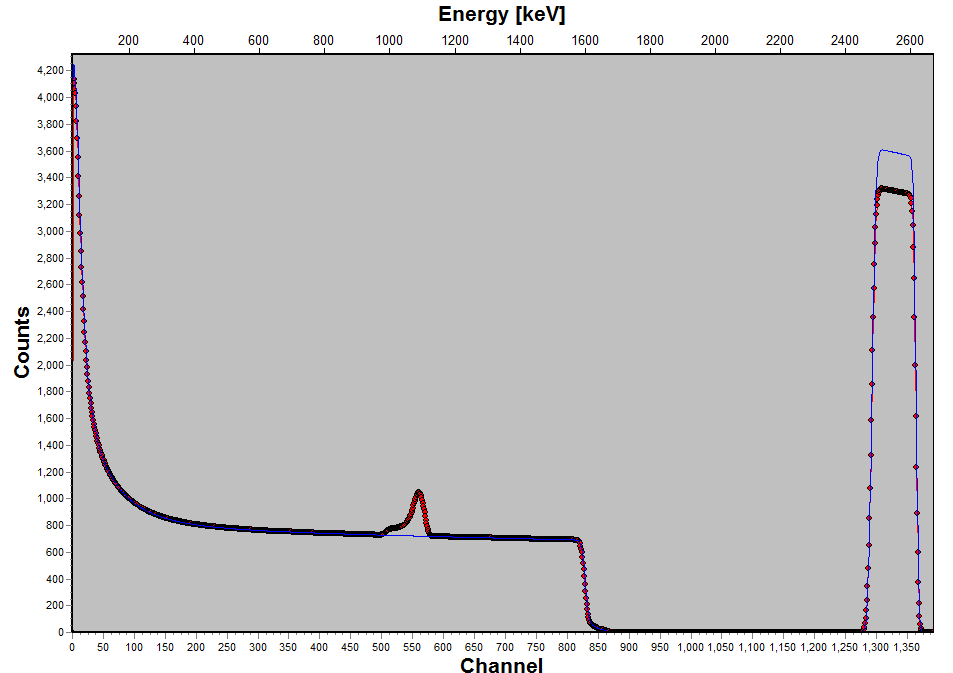 Apparently, there is another element(or maybe 2) that appear on the experimental spectrum.

I am relatively new to RBS, so I find rather confusing to see two narrow peaks, so close to each other on the substrate part of the spectrum.

If the waffer wasn't pure, I would expect some steps, rather than peaks. The way I see it, it's an indication of a possible thin and light layer of unknown elements. How to specify which elements could that be?

Is there also a way to find out if it is really another layer and its position?

On a second look, it seems that the real spectrum has less events that the simulated, which could be an indication of a non pure Rhodium sample. The question is, which element(s) is responsible for the possible impurity?

So you have the RBS spectrum, knowledge of the particle used, particle incident energy, detector geometry, and particle detection system parameters such that you can simulate the spectra to see the deviation the expected Rh peak, but you can't determine what the impurity might be?

Assuming a linear conversion of channel to energy with minimal offset, and assuming the Si is actually under the Rh (so the Si edge is about the width of the Rh signal below where it would be if it were on the surface), I can deduce that you are using He for the backscattering. If using protons the Si edge would be at a higher energy relative to Rh. Then, going to relative kinematic factors, oxygen at the surface should be about channel 570. Nitrogen at the surface would appear at about channel 490. So, the signal on the Si background, if associated with the Rh, has to be O.

So, you have oxygen in the Rh film. The width of the oxygen peak is about that of the Rh, so you don't have any silicon dioxide at the interface. The shape of the oxygen does not match well with the Rh, in that it appears that the surface is richer in oxygen, but there isn't a corresponding decrease in the Rh signal. This could occur if the He energy used was a poor choice - the oxygen cross section has some resonance features, one small one just above 2.5MeV and a larger one just over 3.0MeV. If you used one of those two energies it might explain it pretty well. But then, I would have expected the simulation program to have the appropriate cross sections in it already.

Not the answer you're looking for? Browse other questions tagged nuclear-physics spectroscopy or ask your own question.

0
4 element super conductor without oxygen and iron
1
Ba K Lines in a Cs-137 gamma ray spectrum
7
Is there a difference in the infrared absorption spectrum of a greenhouse gas when pure and when mixed with non-greenhouse gases?
0
Multiple wavelength peaks in HeNe spectrum from FTIR
10
How do astronomers identify different elements from the combined emission spectrum of multiple substances?
1
Peaks in Co-60 gamma spectrum
3
Can muons be used to reach the island of stability of superheavy elements?
0
(How) Does temperature affect the light absorption of molecular systems?