Proof that QCD is the theory describing strong interactions?

I would like to ask what are the experimental evidences that led to the conclusion that QCD is the right theory to describe strong interactions. I know that some of the key point are the decay of $\pi_{0}$ and the measurement of Jets but I'd love to see a full answer to this question. Is there a still a chance to Regge theory nowadays?

Is there a still a chance to Regge theory nowadays?

Regge trajectories are having a revival in string theories. String theories are candidates for the Theory of Everything (TOE) , i.e unification at the quantum level of all four forces, including a quantized gravity.

Various string models of mesons and baryons include a string carrying 2 or 3 massive points (quarks or antiquarks). Rotational states (planar uniform rotations) of these systems generate quasilinear Regge trajectories and may be used for describing excited hadron states on these trajectories. For different string models of baryon we are to solve the problem of choice between them and the stability problem for their rotational states. An unexpected result is that for the Y string baryon model these rotations are unstable with respect to small disturbances on the classical level. This instability has specific feature, disturbances grow linearly, whereas for the linear string baryon model they grow exponentially and may increase predictions for baryon's width Γ. The classical instability of rotational states and nonstandard Regge slope are the arguments in favor of the stable simplest model of string with massive ends both for baryons and mesons. Rotational states of this model with two types of spin-orbit correction are used to describe Regge trajectories for light, strange, charmed, bottom mesons and for N, Δ, Σ, Λ and Λc baryons.

One has to keep in mind that string theoretical models for TOF are at the frontier of research, still and open question on which string theory will describe the Standard Model and a quantized gravity.

Edit: As far as the first question goes

The wiki paragraph has the history of emergence of QCD as the theoretical model of the strong interaction force.

The first experimental indication was that no free quarks came out of high energy scatterings, even though looked for extensively in all experiments that could produce them.

Theorists were looking for a gauge theory similar to the electroweak theory to explain the behavior of the strong interactions, and QCD, as such an SU(3) formulation, could organize observations using asymptotic freedom, that the quarks and gluons in the nucleons had to observe. Once this viable theory was proposed one could calculate the expectation of how the quarks and gluons would behave during scattering, leading to jet model predictions for data. So it was a feedback between data, high p_t and jet structure that led to the establishment of QCD.

The famous mercedes diagram proposed by John Ellis et al at CERN made visual the difference between expectations from the simple parton model and a model where the partons obeyed QCD. You can see the progress in this presentation.. The jet structure is the most solid experimental "proof" of the existence of quarks and gluons. 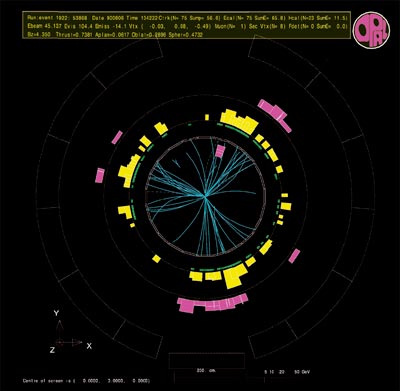 Gluon-jet studies developed into a precision technique for testing QCD at LEP. In this event from the OPAL experiment, the most energetic jet (going to the bottom of the picture) is likely to be the quark that didn't radiate a gluon. The jet moving towards the top right can be identified as a b-quark jet, because an energetic muon (red arrow) was produced in the decay of the b-hadron. This leaves the third jet as the gluon jet and permits the comparison of the properties of quark and gluon jets – an important test of QCD.

Not the answer you're looking for? Browse other questions tagged quantum-field-theory quantum-chromodynamics strong-force or ask your own question.

4
Lattice QCD and string theory
22
What are the details around the origin of the string theory?
9
Are there any serious alternatives to QCD nowadays?
2
Strangeness of elementary particles
7
How did people infer that the strong interactions have a large coupling prior to the discovery of QCD?
6
At what stage is it necessary to introduce a field theory in the regeon-pomeron-odderon model of hadron interactions?
1
Study of strong interactions
1
How can the graviton spin-2 string have emerged from the strong interaction, mediated by spin-1 gluons?