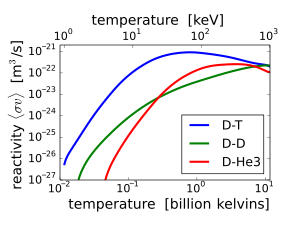 The choice of fusion fuel is dictated by many factors:

If we had much better confinement of the fuel, we would be able to use these alternative fuels at a lower temperature. Improving confinement is what most fusion science research is about :)

1
Why is deuterium and tritium used in fusion reactions rather than two deuterium?
12
Is an H bomb a better "fusion reactor" than the Sun's core?
6
How much faster is the fusion we make on earth compared to the fusion that happens in the sun?
4
Why is hydrogen or helium used in nuclear fusion?
0
What would happen if you detonated a nuclear bomb inside a tank of liquid hydrogen?

13
Why is Helium-3 better than Deuterium for fusion energy production?
3
Can Deuterium undergo a nuclear fusion without the presence of Tritium?
4
Why is hydrogen or helium used in nuclear fusion?
2
Metallic deuterium and metallic tritium as a fuel instead of metallic hydrogen?