Why a system should be at its lowest energy state for its stability?

Every possible reaction in chemistry is to attain stability. In physics, the alignment of an electric dipole in an external electric field and in all other physical systems (at least those I study in high school) attains stability at the lowest energy state. But, why is it so?

To answer your question, you should first understand when is a system most stable.

Firstly it shouldn't have a tendency to move or change state, thus it should be under equilibrium conditions, i.e. the net Force should be zero.

which gives as stability condition

From $(1)$ and $(2)$ it is evident that the graph of $U$ should have a minima at stable equilibrium condition, i.e. The Potential Energy should be minimum when a system attains maximum stability.

Roughly: Becouse $F=-\overrightarrow\nabla U$, with $U$ some potential energy (coud be an effective potential energy). Then, if you aren't in a minimum of potetial, your system isn't in equilibrium.

Edit: Can you see that 1. and 2. are stables equilibrium?. I chemistry your effective potential energy is some function called Gibbs free energy. 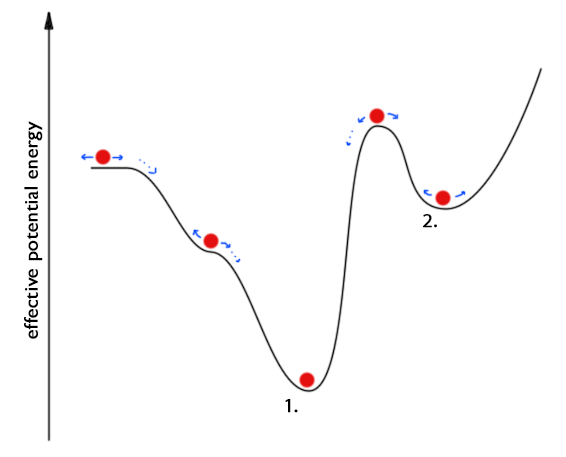 A system that is in thermal contact with it's environment will tend towards both a lower energy state and a higher entropy state. Basically, the energy of the system + environment is fixed, but energy will flow between the two until they are in a state of maximum entropy.

It might be more informative to ask why systems tend towards increased entropy. What happens is that all the states that the system+environment can occupy with fixed total energy have equal probability of being occupied. This is called the fundamental postulate of statistical mechanics. Now there are many such states for which the system has some particular energy $E$. The value of $E$ that corresponds to the greatest number of states is therefore most likely. 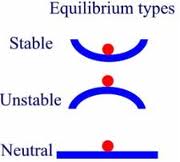 I'll try to explain with the help of an classical example. Take the situations in the picture above. What you're interested in are the first to cases. The unstable state of equilibrium is such a state that when you slightly displace the ball, it departs from the original position. Being at the top of the hill, it has an excess of potential energy (may it be gravitational, electric, etc.) that can be converted into work. However, in stable equilibrium, displacing the ball it will always return to its original position. It was from the start in a state with minimum energy.

Well, chemical reactions almost always require heat (energy) to take a place, and almost always release heat upon reaction, so by that logic state when elements is unable to keep reacting is a state with insufficient energy or, in other words, lowest energy state (or we probably should say "lower energy state" then one that required for reactions)

Resolving (Decreasing) energy gradients to lower realized potential states is what drives every process on many levels including evolution. www.intothecool.com Here is a super cool paper that shows the process across universal, biological and socio-economic domains. http://journals.cambridge.org/action/displayAbstract?fromPage=online&aid=185965

if you look around using a constrained google search for filetype:pdf you can find it free.

That being said the lowest potential state is likely a lattice at absolute zero with a perfectly isomorphic electromagnetic state. Technically anything less than all matter reaching that state is subject to being just a local equilibria point awaiting a lower (more broadly contextualized) state i.e. ultimate heat death.

Not the answer you're looking for? Browse other questions tagged thermodynamics energy statistical-mechanics equilibrium stability or ask your own question.

0
Why does the universe follow the uncertainty principle?
1
Work done relation to potential energy

9
Why are lower energy systems stable?
2
Confused about micro, macro, ensemble, accessible, possible ect. states
3
Why is the energy density in dielectrics greater than that in vacuum for the same electric field?
11
Why are probabilities for each micro-state equal within a micro-canonical-ensemble?
0
Does systems (such as the cell) far from equilibrium have to dissipate their energy? Can't they store it? Is there a physical requirement for that?
1
Why are constant electric fields considered when their energy is infinite?
3
Are the thermodynamical laws extra fundamental interactions beyond the 4 fundamental interactions?
2
Calculation of work done in different processes of thermodynamics in Physics and Chemistry