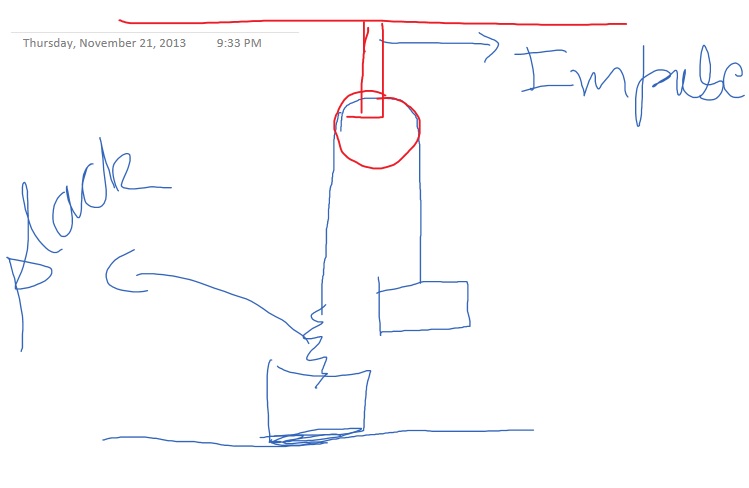 Sorry for the bad drawing, but I hope that this will help you get a hold of the problem.

Consider an Atwood Machine with a total of two blocks, a mass less pulley, ideal string. One block rests on the floor, while the other one is at a height (H). Now, the string near the block that rests on the surface is slack. So, the other block falls freely, and later induces a jerk in the other block. How do I calculate the initial velocity of the two block just after the string is taut.

But, my book says, I should conserve Linear Momentum between the same two points. I think this is wrong, because, The string that holds the pulley in place, will have an impulsive tension as soon as the impulse is generated in the string that joins the two masses.

According to you, what is right, and why?

Linear momentum can't be conserved because there will be an impulse exerted on the system by the pulley. This impulse will be in the upward direction because notice how the tensions in the string on the pulley are downward, so the pulley will apply a force upwards to counteract this impulse.

Mechanical energy can't be conserved because we don't know whether all the impulses are conservative or not.

What you can do is consider an impulse $J$ on both the blocks upwards, and use change in momentum equals the impulse applied.

Not the answer you're looking for? Browse other questions tagged homework-and-exercises newtonian-mechanics classical-mechanics forces or ask your own question.

0
Tensions And Pulleys With Masses
1
Block and inclined plane (INPhO Problem)
0
Relation between accelerations of block and tangential acceleration of the pulley in pulley block system
2
Characteristics of a tight string
2
Why Energy is not conserved?
0
Pulleys and rotational motion problem
1
Newton's Laws of Motion, Pulleys, Rope and tension
1
Will the lighter mass instantly come to rest?