I was recently pointed by laboussoleestmonpays to a beautiful paper from some time ago,

They show that the class of homogeneous mass distributions that is completely monopolar outside of some finite domain (i.e. a lump of homogeneous matter that's confined within some volume $\Omega\subset\mathbb R^3$, but is indistinguishable gravitationally from a point mass located somewhere in that volume) is much broader than simply the spherically symmetric distributions.

Instead, starting with (i) a given centre of mass $\mathbf{x}_O$ and (ii) the outer surface $\Sigma=\partial\Omega$ of the lump of matter, they construct a continuum of homogeneous (but hollow) bodies that are gravitationally indistinguishable from a point mass at $\mathbf{x}_O$, and which is parametrized by the thickness of the shell of material within $\Sigma$.

Connes et al. then go on to describe, in quite some mathematical detail, a process of "deposition" of mass on the inside of the shell that makes up progressively thicker shells that are, still, indistinguishable from the outside from a point mass.

However, their paper contains few specific solutions, and I'm quite curious to know what these aspherical monopoles could look like in their "thick" versions. (Connes et al. only treat thin planes, spheres and cylinders.) Looking at the citing articles on Google Scholar yields very little that looks promising. Has this been explored in the literature? In general, how do these bodies look like? I'm looking to gain some intuition into their general behaviour and properties. How do thick shells look like, say, for taking $\Sigma$ to be a sphere, or a box, or an ellipsoid?

(this is a partial answer)

One example is the preceding work

This paper contains one example of asymmetric monopole produced by rotating figure shown about the horizontal axis passing through the center of mass. 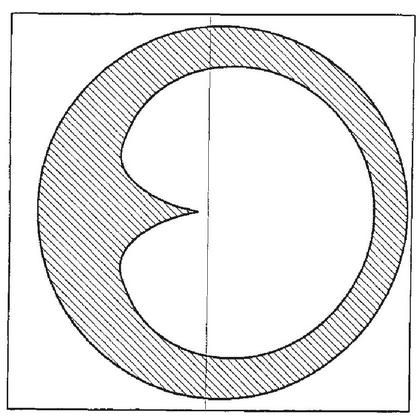 The figure was (apparently) obtained by adjusting spherical harmonics coefficients to nullify multipole moments (and outer curve is not a circle).

Not the answer you're looking for? Browse other questions tagged gravity mathematical-physics electrostatics potential multipole-expansion or ask your own question.

13
Does a pendulum necessarily emit gravitational waves?
1
Is there any efficient additive way to improve field uniformity from a single charge sign?

10
What is the physical meaning of the terms in the multipole expansion?
3
Force on a layer of charge: How can electric field impart force on the charges which created the field?
10
How many truly different multipolar charge distributions are there?
0
Volume charge density in an imperfect conductor connected to an AC circuit
0
How is it possible for an electric field of a charge distribution to be constant?