Does the pilot of a rocket ship experience an asymptotic approach to the speed of light?

A question has recently come up that goes beyond my knowledge of special relativity. Suppose a pilot has his foot on the gas pedal of a rocket ship and keeps it applied to achieve a constant acceleration, and he has a magical engine that can maintain the thrust needed to accomplish such acceleration even as the vehicle acquires mass. He measures his acceleration at periodic intervals and sums it up as he goes.

Observers perceive the rocket to increase in speed and gradually approach the speed of light (but never reach it). Two possibilities are being debated for what the pilot observes, and my preference is for the first:

I assume (1) is true beyond a doubt? If so, is there a straightforward explanation for this?

For a rocket accelerating at $g$ the velocity time looks like:

So, as you guessed, option (1) is the correct answer.

Bear in mind that the crew of the rocket assume they are stationary and that the rest of the universe is accelerating towards them. Their situation is as if they were stationary in a constant gravitational field of $g$ and were observing everything else falling towards them in that field. It should come as no surprise that they do not observe any superluminal velocities.

If you're interested in taking this further, the coordinate system for a uniformly accelerating observer is called the Rindler coordinates.

Incidentally, one of the few things observers in two frames will agree on is their relative speed (measured as the two observers meet i.e. when they're at the same point in space). You'll find that the time dilation and length contraction balance each other out to give both frames the same relative speed.

This question intrigued me enough to spend a few hours on it. I like to address special relativity problems in more than one way, so this gets to the same answer as John's but with different logic.

The problem with the initial concept is that we are assuming v = at, as Newton would say. If the acceleration is 9.81 m/s2, then sure enough, after 1 year (31e6 seconds), we would calculate a velocity greater than light speed. Why does this not work?

One way to demonstrate it is to use a conservation of energy approach. As you know, Newton would say kinetic energy is 1/2mv^2 while in relativity, we show that is only true for velocities well below light speed. We would say if we use enough force to create an apparent acceleration of 9.8 m/s2 that:

and acceleration a is dv/dt, you can eventually show that \begin{alignat}{7} v & ~=~ \frac{1}{\gamma^3}at \end{alignat} which reduces to the Newtonian result when velocity is modest. I am not sure if that is a well known equation, but it solves this problem nicely. Plus you see that the underlying cause is that the acceleration (which is energy addition) is not going to velocity increase, but rather to momentum increase. And momentum can go to infinity without the velocity reaching lightspeed.

The formula also explains why the pilot doesn't calculate greater than light speed by "the summation of the measurements on his accelerometer." He should not increment his speed by at. Instead, his calculation will be, solving numerically, the previous total calculated velocity plus over the next time period, a reduced acceleration, so that light speed is approached asymptotically. I did a spreadsheet and it looks like John's result: 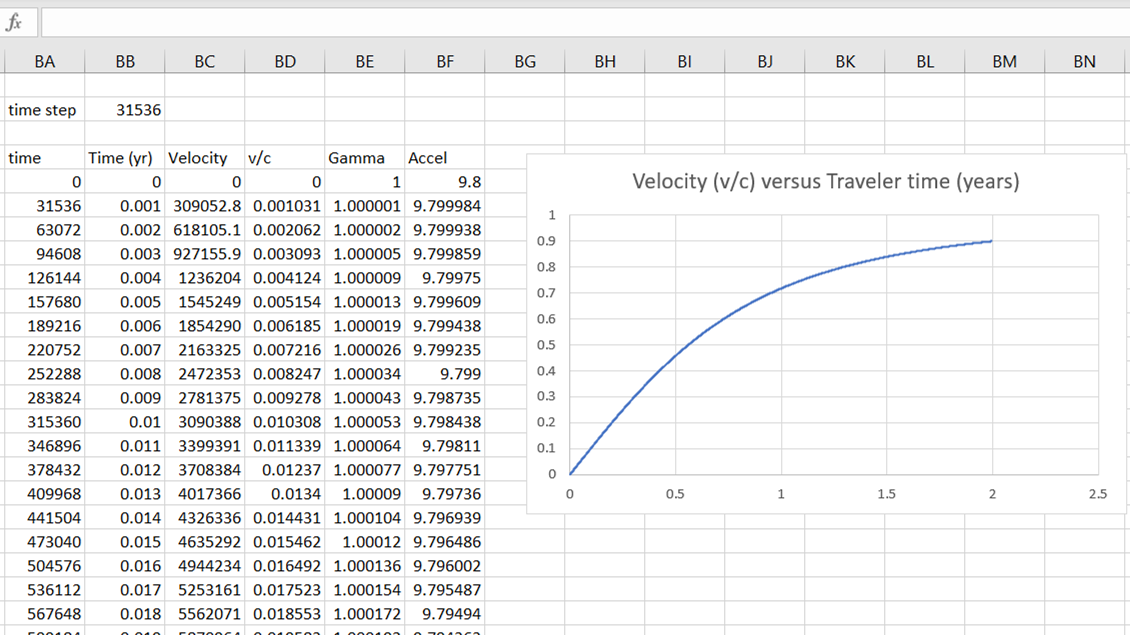 To measure acceleration a pilot should just measure G-force (over weight). If he assumes some overweight as some acceleration and will sum it linearly, he will obtain more-than-c values at some time.

Moreover, a pilot will see, how surrounding Universe passing by faster than C. For example, if some mileposts are installed across Universe, he will see how they counting miles faster than C.

This is because Universe is contracted along pilot's trajectory.

Another point of view says that pilot's time is slowing, but he doesn't notice this and hence feel that mileposts passing faster.

Simultaneously, if the pilot will mark some star or planet and will measure the speed of this body, the result of measurement will say a value slower-than-c.