How is it possible to move something without completely lifting it?

For example, let's assume a chair here: It can be "slid" across the force if we use minimal upwards force, but not enough to actually "lift" the chair. Why should it move?

Here's a better example: I have seen some strong people lift and slide the back of cars, however, the back tires of the car never elevate completely off the ground. With regards to friction, though, how is it possible to actually "move" something without lifting it completely? How does this work is a better question. This image should illustrate the car example: 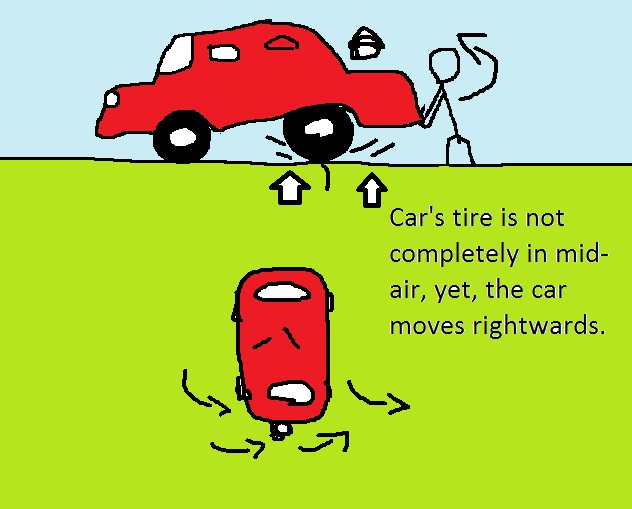 Is there enough space within it to allow the angular force to make it "slid" a pinch, or what else would explain its ability to move without being completely suspended in the air that would, say, differ from this with a human?

The answer has to do with the form of static friction.

Now, magnitude of static friction forces can vary; it can range from zero up to some maximum value. The maximum value is $f_\text{max}=\mu_s N$, where $\mu_s$ is just a number that depends on the two materials in contact (e.g., wood block on plastic table), and $N$ is the upward normal force from the table. In order to start to move an object from rest, you have to exceed the magnitude of the static frictional force $\mu_s N$. When this starts to happen, the object will begin to move and kinetic friction will take over.

With this decrease in $N$ comes a decrease in $\mu_s N$, and hence a decrease in the maximum static frictional force. This means the force you need to apply in order to overcome $f_\text{max}$ is now less if you apply a small upward force to the block.

That's about it! Note that this is a very "macro" explanation that hinges on the form $f_\text{max}=\mu_s N$, which is just a very good experimental relationship. There are probably more microscopic explanations that could be more appealing to you.

So, your question is how one can move something sideways without complete elimination of friction by lifting it into air. On a molecular level objects do not really "touch" each other but keep a minimal distance due to the repulsive interaction of electromagnetic forces. So when somebody stands on the ground she is actually "hovering" a little above the ground. Now, when an object lies on a plane then friction is the resistance to forces which act horizontally on the object. The molecular source of this friction is the "roughness" of the plane and the object: no surface is completely smooth but there are little molecular "bumps" which act as an obstacle to move sideways (see this Wiki article for example). Now there is a point where the horizontal forces are big enough to overcome this resistance and move over those bumps: this is the minimal amount of force needed to move an object horizontally. The strong man lifting cars partially only reduce the friction enough to move it sideways, because the friction is proportional to the weight that is in contact with the surface.

So this is a very rough explanation of friction. It has to be taken with a grain of salt because objects do not just "hover" above the plane due to electromagnetic repulsion but it is also possible to enhance friction by use of van der Waals forces. For example geckos and spiders use such an effect.

Not the answer you're looking for? Browse other questions tagged newtonian-mechanics forces mass friction or ask your own question.