Doesn't the use of a thermometer alter the temperature of the system?

If I place a mercury thermometer in hot water, heat energy will transfer from the water to the mercury inside the thermometer. Will this continue until thermal equilibrium is reached and thus the mercury will show the temperature of the water?

Please correct me if I am wrong.

However, generally, the amount of water is large so that the heat it loses is too small to significantly change its temperature.

You are spot on, although the typical volume of the measuring fluid inside the thermometer tube is truly tiny and thus has an extremely small total heat capacity compared with the thing whose temperature is being measured.

Your thoughts correspond to the following diagram: 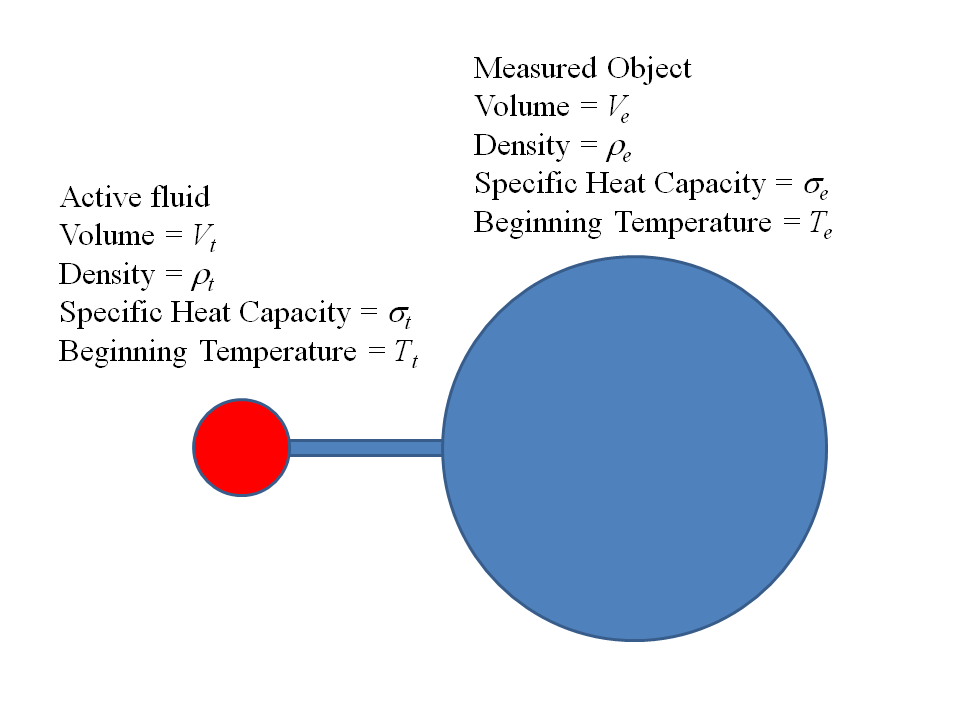 and you are to find the equilibrium temperature of the system. It would be instructive to set up a spreadsheet or a Mathematica notebook with the variables in the following diagram - put some values in for the thermometer bulb volume of mercury / active fluid and assume the measured system is some adjustable volume of water, say ten degrees celsius higher (or lower) in temperature that the thermometer bulb. If you assume the measured system and thermometer are isolated (no heat flows in or out), you can calculate the equilibrium temperature from the first law of thermodynamics energy conservation) adjust your volume of water and see how small it has to be for the thermometer to really make a difference. I should imagine that the water volume where the effect begins to become noticeable would be when your water is 100 times the bulb volume. If the bulb contains 10 cubic millimetres of fluid, this is about 1 cubic centimetre of water.

You are correct that if the thermometer is submerged from room temperature to measure hot water, the hot water will become by a tiny fraction cooler as part of the heat will be used to heat up the mercury of the thermometer.

Calibrated thermometers are not used if one wants accuracy of temperatures to 1/1000 . There exist other methods, and depending on the experiment precautions should be taken as it is not that simple to be sure one is measuring the intended temperature.

Since the mass of mercury is small if one wants better accuracy within the thermometer accuracy, one should take a small part of the liquid in another container, heat the thermometer, and then immerse it in the large volume. You probably would detect no difference.

Eliza, I am going to make one more attempt at answering your question; I'm unable to modify my earlier answer, for some reason, so I will just have to rewrite it. To begin with, Temperature, and the practical measurement or control of Temperature, are thermodynamic properties of MACRO systems, and have nothing whatsoever to do with quantum mechanics (QM), despite the childish efforts of the trolls, to introduce qm into the discussion. The sensing and control of Temperature is a major issue of modern science (physics, chemistry etc) and technology. For example, the semiconductor industry is dependent on controlling Temperatures, up to several thousand K, often to small fractions of a degree.

So your system of water, plus a mercury thermometer, to "measure" its Temperature, actually contains a lot more than you describe, and each of those elements will introduce uncertainty into the system. You mention waiting for heat to flow from the water to the thermometer, and reach equilibrium. That implies that your Temperature is stationary, or is supposed to be; otherwise it isn't at equilibrium. But your container of water, is also connected by thermal paths, to various ambients, that each have their own Temperature; higher or lower than your water. Most likely, is that you have some "heater" that is supplying energy to the water container (heater element), or to the water (microwave), and each of these factors, including the thermal resistance of the paths, is a variable with some uncertainty. The water and container, also lose heat by multiple paths to external environments at other Temperatures, which themselves are uncertain. Your thermometer, as well, in addition to having a thermal resistance connection to your water, has other thermal paths, and resistances, to the environment, and maybe, even to the external heat source. Again you have variables and uncertainties, involved in a rather complex thermal equivalent circuit.

Ultimately, you are going to get a mercury liquid level, designating THE Temperature reading output of that thermometer. Or it could be the output of some quartz crystal thermometer, or Platinum resistance element.

If you were trying to grow a crystal, or thermally diffuse some impurity dopant into your material; or even bake a cake, or cook some food, that material itself, is only concerned with the Temperature, that IT perceives. It cares not about your thermometer, or what it reads.

This uncertainty, is often called "instrumentation error", and it is one of the most common problems of process control. It can get much worse too. Some people think they can instead measure some proxy stand-in for their Temperature, and simply ASSUME that there is a robust transfer function between the actual variable (Temperature), and the proxy substitute (maybe a color, or a mechanical motion).

Well the further you get from OBSERVING the variable you wish to control, the more uncertainty, there is in the robustness of your measurement.

Your pot of water sitting on its heating element, had a certain range of Temperatures, throughout the water; but when you insert the thermometer into the system, you changed the system, and in ways almost impossible to accurately quantify, so you have introduced an uncertainty into the new system, and that requires good experimental skills, to keep down to acceptable levels.

All observations and measurements in physical systems, are altered just by providing the sensing apparatus, and there is no way to eliminate that. Yes, it can be minimized, but never eliminated.

Not the answer you're looking for? Browse other questions tagged thermodynamics experimental-physics temperature measurements or ask your own question.

2
Does gravity affects temperature reading of a mercury thermometer?
1
Can a thermometer really measure the temperature of a substance?
1
How does the temperature in a bucket of water with ice change over time?
1
Thermodynamics Question: Does measuring the temperature of an object change its temperature?
3
If steam and water, both at 100 °C, were exposed to a person's skin for a small time interval, which would result in a more severe burn?
0
How is heat transferred (microscopically)?
0
Is the *measured* temperature inside a hollow black body the same if we place a thermometer inside it or let it make contact with the body itself?
1
Why is bringing two object to their initial temperature an irreversible process?
0
Exact mode of evaporation
0
How to avoid confusion of when to use and not to use the heat of fusion and condensation to get the amount of water in temperature equilibrium?