How to measure speed of a ceiling fan?

I thought for fun I might measure how my ceiling fan slows down when turned off, and maybe find out what forces act on it when it slows down. My problem is that for that I need to measure its rotational speed when it's turned on. When it's in the lowest speeds it's easy because you can see it rotate, but for higher speeds that's not an option.

I thought one way would be to use a strobe light and try to match up the frequency, but I don't have one of those. Can you think of any DIY way to measure the speed of a very fast ceiling fan?

If you have a smart phone with a flash, you probably have a strobe feature at your disposal.

You can put a drinking straw into it and record the sound it makes, and measure the frequency in sound-editing software. Imagine the fun explaining this to paramedics.

Similarly, a laser-pointer, a mirror, and a photo-diode cleverly hooked up to your computer's sound card can be coaxed into doing science.

Finally, a laser pointer, two mirrors and knowledge of the speed of light in your room can be used to to determine the rotational speed of the fan, provided your room is big enough, and the fan is moving fast enough. If this is going to work, it will probably be the least accurate but most fun.

Another simple DIY method might be to attatch a string with a weight at the end of one of the blades (possibly another one on the other side if the fan gets too unbalanced). By looking at the angle the string makes you should be able to determine the rotational speed of the fan: $$ \omega=\sqrt{\frac{g\tan{\theta}}{r+l\sin{\theta}}}, $$ where $\theta$ is the angle of the string with the vertical, $r$ is the radius at which you connect the string to the blade, $l$ is the length of the string and $g$ is the acceleration due to gravity.
Measuring $\theta$ accuratly will be another thing. Best bet might be taking a photo with a long exposure time to make sure that you view the string from the 'side'.

I don't know if you would classify this as cheating but you might be able to affix a bicycle speedometer to one of the blades.

You can pick them up quite cheaply, it would be quite easy to affix and it would give you a fairly accurate reading. 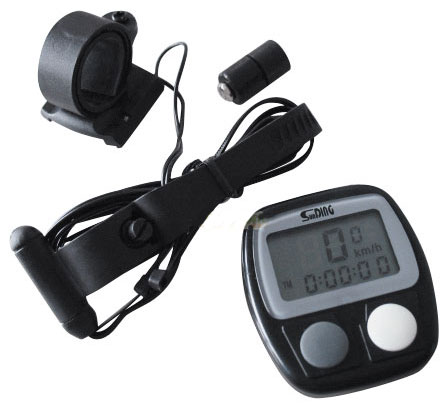 Adding to the sound-card theme, you could fasten a small, light, constant frequency sound generator on the end of a blade. Then use the size of the Doppler shift for linear velocity, or more simply, the period of the frequency oscillations for rotation period (Again, there is a good possibility of EMS explanations to be made.)

Having first measured the width of the blade, the period of time during which line-of-sight to a light-source or marker on the ceiling is occluded is a measurement of the average (linear) speed of the blade at the time. Combine with the radius at which that measurement was made to get angular velocity.

A webcam can be utilized for this purpose (though data reduction by hand will be boring) or a photodiode driving the sound card. As others have noted the audio-in port on your sound card is a surprisingly versatile (though sensitive and limited) data acquisition port.

Just an idea not a fully fledged proposition:

You can place a pencil in such a way it gets struck by the blades of the fan, and makes a noise every time a blade passes it (I remember seeing a video of some one on youtube making music with it but now I can't find it).

You can record a video of your fan rotation and calculate the fan rotation frequency based on the frame rate, using, e.g., Microsoft Movie Maker software. I did something like that some time ago.

My method may look far-fetched but in theory it should work ,It uses Probability to measure the speed it is basically a Monte Carlo experiment where you calculate the probability of an object hitting the fan both theoretically and and practically by actually throwing lots of shots.

where p(hitting) can be calculated by actual throwing for example if 30 times you hit out of total 100 throws p(hitting) becomes 3/10 . Though you will need to make those throws coherent and do a reasonable approximation for T .

I have described the method here

It's quite simply really: A tachometer is used for measuring rotational speed, allowing us to measure what you're interested in.

Not the answer you're looking for? Browse other questions tagged measurements home-experiment or ask your own question.

15
Home experiments to measure the RPM of a pedestal fan without special equipment?
0
Experiment to measure initial speed of high speed tennis ball?
3
What truly is mass, and is there a direct way to measure it?
4
How to measure Entropy?
3
How can I measure the speed of a figure skater's spin?
0
How to measure blue light at home?
126
Why is the vibration in my wire acting so oddly?
3
How to measure radius of the Earth in cloudy weather?