Is there a way to show that motion of Earth around the Sun is elliptical (Kepler's 1st law) from Newton's laws without resorting to the use of differential equations of motion?

Newton's original proof was in fact based on geometry (he hadn't invented calculus yet). Richard Feynman devised his own, simpler geometric proof for one of his famous lectures. You can find it in Feynman's Lost Lecture, by Goodstein & Goodstein, and in this article: Paths of the Planets from Hall & Higson. But since it's so much fun, I'll describe it here as well.

Let's start with a lesser-known way to construct an ellipse, the so-called circle construction. Draw a circle with centre $O$, and fix a point $A$ inside the circle. Pick a point $B$ on the circle, and draw the perpendicular bisector of $\overline{AB}$ (blue line). It intersects $\overline{OB}$ in a point $P$, and as $B$ moves around the circle, these intersection points form an ellipse. Also, the blue biscector lines are tangent lines to the ellipse, and $O$ and $A$ are the foci. 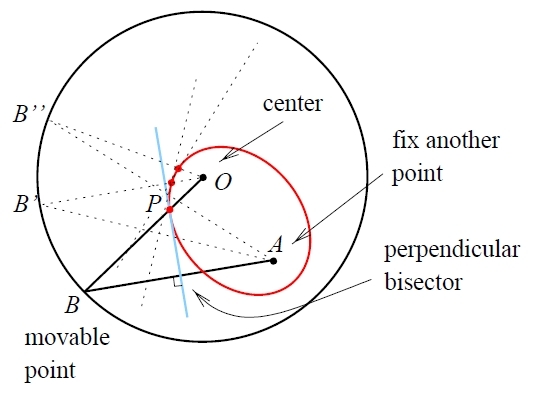 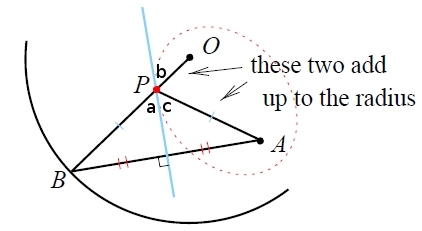 The geometric proof of Kepler's Second Law (planets sweep out equal areas in equal times) from Newton's first two laws is straightforward and can be found in the Hall & Higson article. Now, if a planet traverses an angle $\Delta\theta$ in a small time interval $\Delta t$, it sweeps out an area $$ \text{area}\approx \frac{1}{2}\Delta\theta\, r^2. $$ 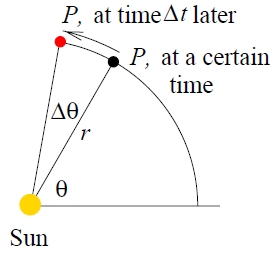 At this point, Feyman's argument deviates from Newton: while Newton breaks up the orbit it equal-time pieces, Feyman considers equal-angle pieces. In other words, Feynman breaks up the orbit in subsequent pieces with areas $$ \text{area}\approx \text{constant}\cdot r^2. $$ Newton's inverse-square law (which can be derived from Kepler's Third Law) states that the acceleration of a planet is proportional to the inverse square of its distance $r$: $$ \left\|\frac{\Delta\boldsymbol{v}}{\Delta t}\right\| = \frac{\text{constant}}{r^2}. $$ Eliminating $r^2$, we get $$ \left\|\Delta\boldsymbol{v}\right\| \approx \text{constant}\cdot\frac{\Delta t}{\text{area swept out in $\Delta t$}}. $$ But Kepler's Second Law states that the area swept out in $\Delta t$ is a constant multiple of $\Delta t$. Therefore, $$ \left\|\Delta\boldsymbol{v}\right\| \approx \text{constant}, $$ that is, intervals of constant $\Delta\theta$ also have a constant change in velocity. We can use this fact to construct a so-called velocity diagram. Break up the orbit into equal-angle pieces, draw the velocity vectors, and translate these vectors to the same point. 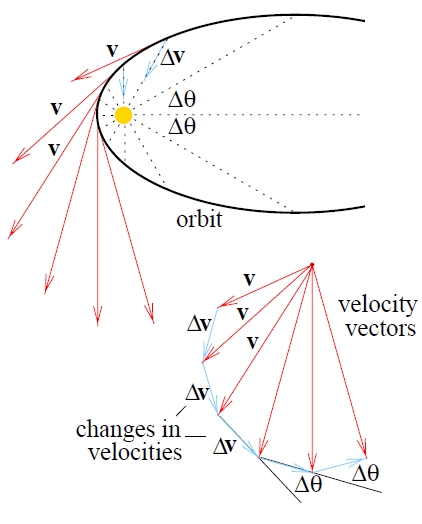 Since $\left\|\Delta\boldsymbol{v}\right\|$ is constant, the resulting figure is a polygon with $\dfrac{360^\circ}{\Delta\theta\,}$ sides. The smaller the angles, the more it approaches a circle. 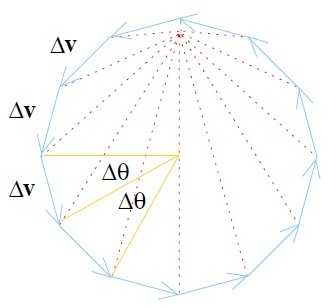 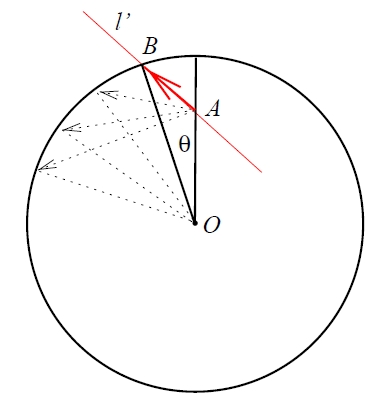 Rotate the velocity diagram clockwise by $90^\circ$, so that $l'$ becomes perpendicular to $l$. Construct the perpendicular bisector $p$ to the line $\overline{AB}$, and the intersection $P'$ with $\overline{OB}$. It turns out that we are in the exact same situation as the circle construction for the ellipse: as $B$ moves on the velocity diagram, the points $P'$ form an ellipse. 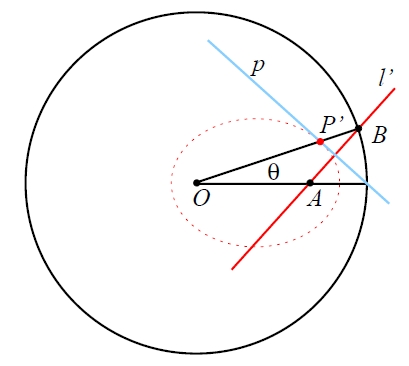 10
Why does an orbit become hyperbolic when total orbital energy is positive?
5
How did Isaac Newton figure out how the law of gravity worked?
4
From Newton to Kepler without infinitesimals
1
Analytical proof for Kepler's first law using cartesian co-ordinates
2
Can soneome help me understand this part of the Feynman's Lost Lecture?