How can I explain this fallacy of conveying information faster than Light?

First statement of this question: In superluminal phase velocities, what is it that is traveling faster than light? says that

Also in the comment to my recent question: Is parallel programming a need of future and worth investing time and money? it is said that:

FTL communication between the two ends of our processors is impossible.

Now I have conceptual model of communication system as shown below: 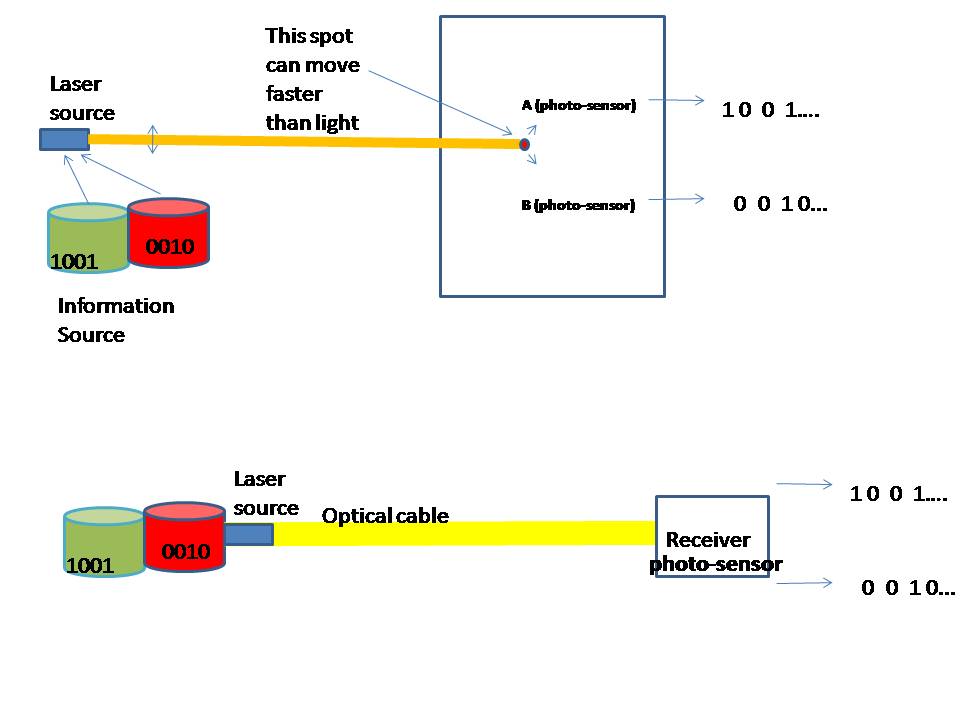 In the upper model, a laser is being moved up and down, and is being detected by the photo-detectors A & B. If the laser spot is at A , A's output is 1 else 0, and similarly for B.

In the lower model, a simple optical fiber based communication is being shown.

Now if we assume that the distance between laser and photo sensors A & B is very large, it can be proved that the spot (shown in red) can move at speed greater than light.

Can somebody explain this fallacy? In my first case information is being conveyed at a speed which is more than the speed of light, and is thus faster way of transmitting information as compared to fiber shown in the lower diagram. How is this possible?

Why information is being conveyed at much faster rate in upper case? Start from the case when the laser beam is in between the two detectors. Now let us transfer a 1 to A. So I need to move my hand up - let us say I do this at a speed of 1cm/s. Let us say with this velocity, in 1 second the spot reaches the detector A. So I have conveyed the information '1' in 1 second. And this comm took at a speed of spot which s greater that that of light. Now consider the case of usual optical comm. Assume that the distance is sufficiently large, so that light takes more than 1 second to reach the receiver.

What is wrong in my calculations?

Also Even If I do not compare upper and lower case, am I not proving that information is being conveyed at speed more than that of light. this is because the information is carried in spot that is capable of moving at a speed greater than C.

Yes, the spot on the receiver will "move" faster than the speed of light, and this does not break any physical principles. Why? Because no real thing is moving.

Consider a black box on a white background on your computer screen. Now suppose you animate it such that the box moves at 1cm/s. However, the box is just an image created by turning on and off pixels, while the pixels themselves are stationary. In short, only the image moves.

Similarly in your example, just the illuminated spot changes faster than the speed of light.

When you start transmission at A(source), there is no data being received at B(destination).

As you can see, there will always be a difference of 1 year between data being sent and received, i.e. info sent at the speed of light.

Hope this makes sense to you.

Any time you read a report of superluminal whatever, it's another illustration of Phase vs Group velocity. The pattern indeed moves, but by pre-arrangement not by communication at that speed. A wonderful illustration is from Greg Egan: http://gregegan.customer.netspace.net.au/APPLETS/20/20.html

So playing with that applet is the way to explain it.

To possibly prove this statement I quote;-)

If the measurement is unread it carries information.

First I don't think that light moves faster than light. If your experiment isn't flawed it might be something to do with the frequency difference of the red light being lower.I am speaking here only from unvarified personal experience.I was once doing a radio moon bounce which had a delay on the information being sent.When i decreased the frequency to its lowest harmonic the information imposed on the radio waves appeared to be instantanious.So from my experiences information might be able to be sent faster than light.But this is not garanteed.As for parallel processing,there can be no other way.

39
Is it really possible to break the speed of light by flicking your wrist with a laser pointer?
32
In superluminal phase velocities, what is it that is traveling faster than light?