Is an entropic force an actual force that can be explained as a fundamental interaction?

Fundamental interactions, such as electromagnetism, the strong force, the weak force, and possibly gravitation, all have something in common: They can be described in terms of relativistic quantum fields, and are clearly the results of interactions between two different kinds of fields. For example, with an electron interacting via the electromagnetic force, one can describe the electromagnetic field using quantum electrodynamics, and an equation of motion can be obtained from the QED lagrangian: $$\mathcal{L}_{QED} = \bar{\psi} (i \gamma^{\mu} D_{\mu} - m)\psi - \frac{1}{4} F_{\mu \nu} F^{\mu \nu}$$ And, the interaction picture here is clear: The electron field ($\psi$) interacts with the electromagnetic field, resulting in its change in motion.

However, with an entropic force (such as the elasticity of a polymer), can the same be done? Can one construct a Lagrangian for the elastic force of a polymer, and is there some sort of "entropy force field" that can act as the relativistic quantum field with which polymer molecules interact? Or is the entropic force not a force at all, just a consequence of the universe tending towards maximum entropy? Or, alternatively, is it possible that every entropic force that exists in this universe is actually a manifestation of one of the fundamental forces (electromagnetism, strong force, weak force, gravity), meaning that the elastic force in a polymer is really something like electromagnetic interaction?

Entropic forces are emergent effects resulting from systems tending towards maximum entropy. Such emergent effects can be described as forces in an effective theory giving a coarse-grained system description ignoring the entropic degrees of freedom.

An extremely simple example (Mikado model) demonstrating the emergence of an $1/r^2$ Entropic force is given here: 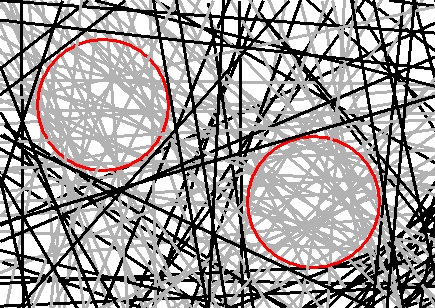 In this, and many other examples, an entropic attractive force emerges in a system with no other interactions than excluded volume effects. So it is not correct to claim "that every entropic force is the manifestation of one of the fundamental forces".

(add my comments as an answer)

Many physicists have argued (succesfuly?) about this. Now the concept (and content) of conventional force can be discussed, the fact remains that entropy in one way or another is there and one can formulate the formalism around this (or even beyond..).

A similar (and related?) concept is that of an inertial force (and inertia itself). There are many interesting connections between these concepts and their interplay (previous link on entropic forces has some links in this direction also).

For example using concepts from information geometry and maximum entropy, Newtonian dynamics can be produced (or emerge if you like)

At the end of the day it can be around what one whould like to call fundamental (or more correctly "assigned") force or property..

Finaly one should take account of phenomena (e.g like the Aharonov-Bohm effect), which are not "assigned" in the conventional sense (the potential is not observable or assignable in this way)..

Entropy exists on all systems including elasticity in polymers. I'm not sure but in most polymers the molecules are held together by hydrogen bonds. You might be able to count the bonds and then add the numbers and use it as an electron charge field equation.

Not the answer you're looking for? Browse other questions tagged quantum-field-theory thermodynamics elasticity or ask your own question.

1
Higgs boson sources
40
Weak force: attractive or repulsive?
13
Casimir effect as an entropic force
10
CP violation from the Electroweak SU(2)$_{weak,flavor}$ by $\int \theta F \wedge F $
7
Why is there no fundamental force following from the $SU(4)$ symmetry?
3
What is the definition of "force" in quantum field theory?
3
Are the thermodynamical laws extra fundamental interactions beyond the 4 fundamental interactions?
3
Can strong and weak "forces" manifest in Newton Units?