Do the particles made in a collider exist outside the collider?

Below is the transcript of a section from Demystifying the Higgs Boson with Leonard Susskind. Around 1:02:23 Susskind says that

the heaviest of the fermions is called the top quark. Top quark is thousands of times heavier than the electron many many times heavier, and higgs preferentially will decay into top quarks. (higgs cannot decay to quarks because they are too heavy. so you take two quarks and align them to produce higgs! ... Go into the laboratory and take two top quarks, collide them together and make a higgs. The problem is that it is not so easy to find top quarks in nature... why not? they decay very rapidly to the other quarks. They are not sitting around. You cannot put them in the accelerator and accelerate them... they disappear in a tiny fraction of a second. There are no top quarks sitting around. Not even buried in protons and so forth. You have to make top quarks somehow in the collision...

My question is, are the particles that reveal themselves in a collider exist outside the collider, that is, outside the strong electric and magnetic fields that make them?

What I am trying to understand, if Higgs or quarks are "fundamental" and "elementary" particles, are there any experiments showing that they exist outside the magnetic and electric field that create them?

This answer is not to the topical question but to the OP's comment to an answer:

Sorry for the ignorance, but, if so, are protons and neutrons observed outside electric and magnetic fields?

How does one get "outside" of electric and magnetic fields? Classically, a single charged particle has an electric field that extends over all space.

I think you should closely examine the presumptions you hold, to even ask this question, and do some further reading and thinking.

There's no direct way to measure the Higgs particle directly. The way you use is basically measuring the particles, to which it decays. Take a look at the following Branching Ratio plot for the Higgs particle: 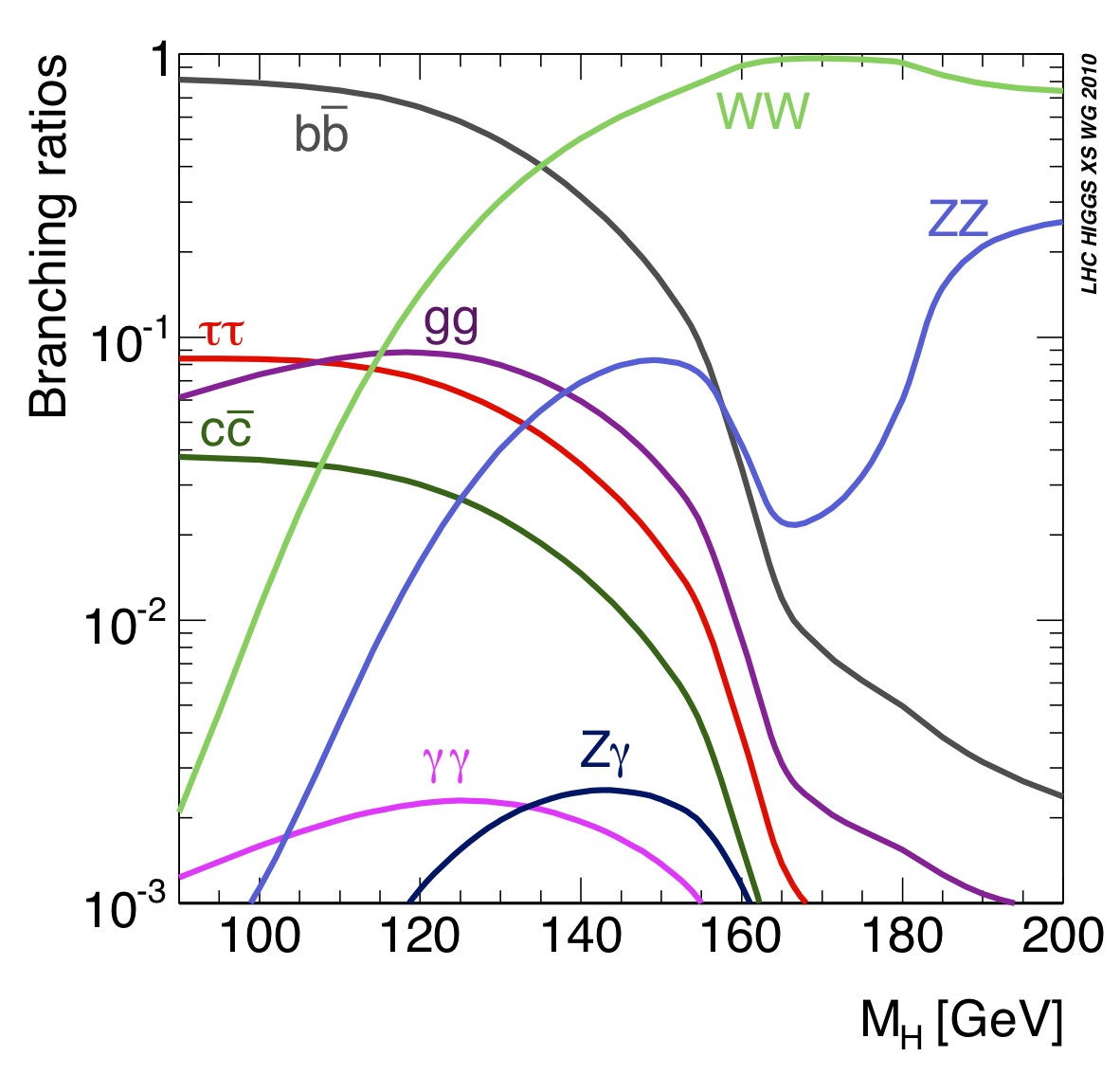 Yes, those particles (or fields basically) exist outside the collider, but we have no way at all to measure them, and actually we can't measure them even inside the collider some times, and we use some very sophisticated tricks to make this measurement possible.

One more thing I would like to mention is the idea of something that "exists"... actually if we talk in terms of quantum mechanics and quantum field theory, everything exists all the time, because you have quantum states which are superposition of all possibilities, but when you measure them, one of the possibilities show up. So, some particles exists with a very low probability, and that's why it's very hard to find them when doing a measurement, and some particles are almost all the time there. (Yes, it's crazy, but it's true).

It depends on what particle you're talking about.

Up and down quarks are everywhere, since they constitute protons and neutrons.

The problem with the Higgs and the top quark is that they have a big mass, so you need high energies to create them and you won't generally find them, except in cosmic rays or other high energy sources.

The Higgs boson and all the flavours of quark are indeed physical and they do "exist" physically. It is indeed possible, in principle, to detect them directly, both within the collision environment, at the detector, or outside it.

The problem, however, is that their existence is temporally very brief. Higgs bosons do pop into existence in the LHC, but unfortunately their lifetime is very brief. Therefore, they decay before they've had any chance to get out or even make it to the detector. This means that all we can do is measure their decay products. However, this does not mean that they did not exist in the first place.

This answer is also to a comment by the OP to the answer of @EmilioPisanty. The OP insists

If so, my question is still valid: How do we know these particles are not artifacts of electricity and magnetism?

Physics at the present time has modeled all of nature quite successfully, i.e. ordering and prediction almost all data in particle physics, called the Standard Model .

In this model, the SU(3)xSU(2)xU(1) symmetries of the Lagrangian actually create as artifacts of the symmetry all elementary particles in the table and all the dynamically produced composites from these.

U(1) is the symmetry of electromagnetism in these groups and yes, everything is an artifact of the combination of forces , weak strong and electromagnetic. This has been the most economical way of describing the experimental data, and encapsullating them in one mathematical model.

To add to the previous answers.

Particles such as the Higgs field and the quarks are, in the modern theory, understood as excitations/waves/perturbations of the underlying quantum fields. The fields permeate the whole of space and time and the way they interact with each other determines the physics of the universe.

Arguably, the fields are more fundamental than the particles, as the latter are aspects of the former. The Higgs field, is everywhere, and everywhere non-zero. The Higgs particle has been created and annihilated countless times in supernovas and quarks and Higgs particles always exist in strong interactions as terms in the probability functions.

In some sense, as Susskind hints, observing the Higgs seems like manufacturing it with big complicated machines, but the essence of the Higgs, its field, is very very real, and is alwyays there. LHC or not.

Not the answer you're looking for? Browse other questions tagged particle-physics higgs accelerator-physics elementary-particles or ask your own question.

7
Why not using cosmic rays to study HEP, since they are way more energetic than LHC?
12
Why don't we normally see the Higgs boson?

1
Where does the Higgs Boson fit in the three generations of charged particle?
2
Is the Higgs field responsible of only 1% of the proton mass?
0
How do gluons form virtual top quark or bottom quark loop?
0
Does the existence of particles with an electric charge that varies from 0 to 4/3 proof that more elementary particles with charge 1/3 or 0 exist?
1
Electron mass from “Higgs-like” interaction with $Z$-boson?
2
What dictates how the Higgs boson will decay?
0
Higgs particles and Dark Matter particles