Is there something similar to Noether's theorem for discrete symmetries?

Noether's theorem states that, for every continuous symmetry of an action, there exists a conserved quantity, e.g. energy conservation for time invariance, charge conservation for $U(1)$. Is there any similar statement for discrete symmetries?

For continuous global symmetries, Noether theorem gives you a locally conserved charge density (and an associated current), whose integral over all of space is conserved (i.e. time independent).

In the case of finite group of symmetries the conserved quantity is itself discrete. You then don't have local conservation laws because the conserved quantity cannot vary continuously in space. Nevertheless, for such symmetries you still have a conserved charge which gives constraints (selection rules) on allowed processes. For example, for parity invariant theories you can give each state of a particle a "parity charge" which is simply a sign, and the total charge has to be conserved for any process, otherwise the amplitude for it is zero.

Put into one sentence, Noether's first Theorem states that a continuous, global, off-shell symmetry of an action $S$ implies a local on-shell conservation law. By the words on-shell and off-shell are meant whether Euler-Lagrange equations of motion are satisfied or not.

Now the question asks if continuous can be replace by discrete?

Now, where could a discrete version of Noether's Theorem live? A good bet is in a discrete lattice world, if one uses finite differences instead of differentiation. Let us investigate the situation.

Our intuitive idea is that finite symmetries, e.g., time reversal symmetry, etc, can not be used in a Noether Theorem in a lattice world because they don't work in a continuous world. Instead we pin our hopes to that discrete infinite symmetries that become continuous symmetries when the lattice spacings go to zero, can be used.

and is discrete as well. The action $S$ is

with Lagrangian $L_t$ on the form

Naively, the action $S$ should be extremized wrt. neighboring virtual discrete paths $q:\mathbb{Z} \to\mathbb{Z}a$ to find the equation of motion. However, it does not seem feasible to extract a discrete Euler-Lagrange equation in this way, basically because it is not enough to Taylor expand to the first order in the variation $\Delta q$ when the variation $\Delta q\in\mathbb{Z}a$ is not infinitesimal. At this point, we throw our hands in the air, and declare that the virtual path $q+\Delta q$ (as opposed to the stationary path $q$) does not have to lie in the lattice, but that it is free to take continuous values in $\mathbb{R}$. We can now perform an infinitesimal variation without worrying about higher order contributions,

Note that the last sum is telescopic. This implies (with suitable boundary conditions) the discrete Euler-Lagrange equation

This is the evolution equation. At this point it is not clear whether a solution for $q:\mathbb{Z}\to\mathbb{R}$ will remain on the lattice $\mathbb{Z}a$ if we specify two initial values on the lattice. We shall from now on restrict our considerations to such systems for consistency.

As an example, one may imagine that $q_t$ is a cyclic variable, i.e., that $L_t$ does not depend on $q_t$. We therefore have a discrete global translation symmetry $\Delta q_t=a$. The Noether current is the momentum $p_{t+\frac{1}{2}}$, and the Noether conservation law is that momentum $p_{t+\frac{1}{2}}$ is conserved. This is certainly a nice observation. But this does not necessarily mean that a Noether Theorem is behind.

Imagine that the enemy has given us a global vertical symmetry $\Delta q_t = Y(q_t)\in\mathbb{Z}a$, where $Y$ is an arbitrary function. (The words vertical and horizontal refer to translation in the $q$ direction and the $t$ direction, respectively. We will for simplicity not discuss symmetries with horizontal components.) The obvious candidate for the bare Noether current is

But it is unlikely that we would be able to prove that $j_t$ is conserved merely from the symmetry $0=S[q+\Delta q] - S[q]$, which would now unavoidably involve higher order contributions. So while we stop short of declaring a no-go theorem, it certainly does not look promising.

Perhaps, we would be more successful if we only discretize time, and leave the coordinate space continuous? I might return with an update about this in the future.

An example from the continuous world that may be good to keep in mind: Consider a simple gravity pendulum with Lagrangian

Abstract We introduce a method to construct conservation laws for a large class of linear partial differential equations. In contrast to the classical result of Noether, the conserved currents are generated by any symmetry of the operator, including those of the non-Lie type. An explicit example is made of the Dirac equation were we use our construction to find a class of conservation laws associated with a 64 dimensional Lie algebra of discrete symmetries that includes CPT.

The way followed is a succesive relaxation of the conditions of Noether's theorem on continuous (Lie) symmetries, which generalise the result in other cases.

For example (from above), emphasis, additions mine:

The connection between symmetry and conservation laws has been inherent in all of mathematical physics since Emmy Noether published, in 1918, her hugely influential work linking the two. ..[M]any have put forward approaches to study conservation laws, through a variety of different means. In each case, a conservation law is defined as follows.

Noether’s [original] theorem is applicable in the [special] case where $\Delta[u] = 0$ arises as the Euler-Lagrange equation to an associated variational problem. It is well known that a PDE has a variational formulation if and only if it has self-adjoint Frechet derivative. That is to say: if the system of equations $\Delta[u] = 0$ is such that $D_{\Delta} = {D_{\Delta}}^*$ then the following result is applicable.

[..]Given that [the general set of symmetries] is far larger than those considered in the classical work of Noether, there is potentially an even stronger correspondence between symmetry and conservation laws for PDEs[..]

Corollary 1. If $L$ is self-adjoint or skew-adjoint, then each $\Gamma \in sym(L)$ generates a conservation law.

Specificaly, for the Dirac Equation and CPT symmetry the following conservation law is derived (ibid.): 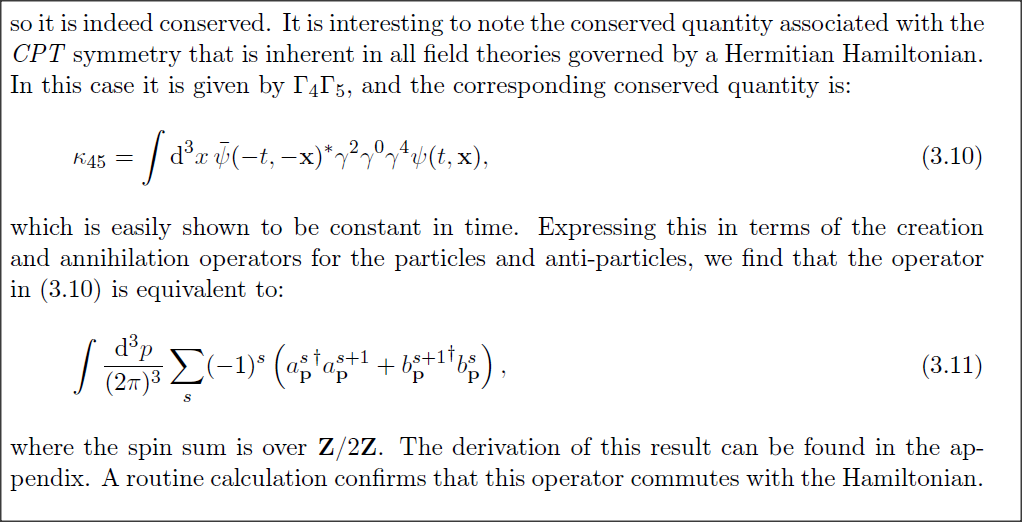 Conservation laws are not related to any symmetry, to tell the truth. For a mechanical system with N degrees of freedom there always are N conserved quantities. They are complicated combinations of the dynamical variables. Their existence is provided with existence of the problem solutions.

When there is a symmetry, the conserved quantities get just a simpler look.

No, because discrete symmetries have no infinitesimal form which would give rise to the (characteristic of) conservation law. See also this article for a more detailed discussion.

As was said before, this depends on what kind of 'discrete' symmetry you have: if you have a bona fide discrete symmetry, as e.g. $\mathbb{Z}_n$, then the answer is in the negative in the context of Nöther's theorem(s) — even though there are conclusions that you can draw, as Moshe R. explained.

However, if you're talking about a discretized symmetry, i.e. a continuous symmetry (global or local) that has been somehow discretized, then you do have an analogue to Nöther's theorem(s) à la Regge calculus. A good talk introducing some of these concepts is Discrete Differential Forms, Gauge Theory, and Regge Calculus (PDF): the bottom line is that you have to find a Finite Difference Scheme that preserves your differential (and/or gauge) structure.

I am by no means an expert, but I read this a few weeks ago. In that paper they consider a 2d lattice and construct an energy analogue. They show it behaves as energy should, and then conclude that for this energy to be conserved space-time would need to be invariant.

It will be interesting to know whether this thought applies to discrete non-abelian symmetry by embedding to a non-abelian continuous symmetry group, and do the same procedure again.

Share
Improve this answer
answered Mar 3, 2014 at 3:28
user41670user41670
$\endgroup$
5
Add a comment  |
Highly active question. Earn 10 reputation (not counting the association bonus) in order to answer this question. The reputation requirement helps protect this question from spam and non-answer activity.

Not the answer you're looking for? Browse other questions tagged mathematical-physics symmetry group-theory noethers-theorem discrete or ask your own question.

4
Conservation Laws and time-reversal symmetry
3
Can Noether's theorem be applied to cyclic time symmetries?
2
Why are there no conserved quantities with discrete symmetries?
18
If all conserved quantities of a system are known, can they be explained by symmetries?
5
CPT Violation and Symmetry / Conservation Laws
6
Wouldn't we have an additional conservation law in a spherical Universe?
6
What are some approaches to discrete space-time used in modern physics?
9
Why do we use the anticommutation relation for particle-hole and chiral symmetries?
6
Will an eventual discreteness of spacetime have consequences in the light of Noether's theorem?
3
Symmetry of Minkowksi Metric -> Conserved Current?
See more linked questions