What is a virtual ground?

What is a virtual ground? I would like to know what it is.

For example many op-amp circuits were originally designed for dual power supplies (say +12V and -12V) and could handle filtering or modification of a signal that was oscillating about ground. This need for two power supplies is annoying, so it is possible to remake these circuits with a single supply, and a "virtual ground" held at half the power supply. As long as signal voltage are compared to this virtual ground, filtering or modification of the oscillating signals can be handled just fine as they only go negative relative to the virtual ground.

In this way, it is fairly straight forward to convert dual supply op-amp circuits with single supply circuits by replacing the ground reference voltage in the circuit to a virtual ground to which the signal is referenced. This is the main context in which I have seen 'virtual ground' have a useful application.

"Ground" refers to a particular voltage, generally taken to be "zero", or the voltage of the earth. A "virtual ground" is a wire in a circuit whose voltage is held to be zero not because it is directly connected to the true ground, but instead because it is actively driven to that voltage typically by feedback mechanisms.

Here's an example of a virtual ground circuit: 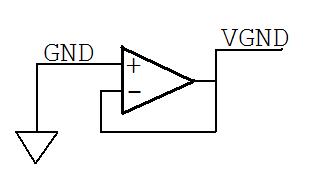 By the way, in the usual "electric-circuits" limit, circuits are composed of "wires" where we make the assumption that the voltage of a wire is the same no matter where on the wire we look. That is, we ignore the process by which a signal is sent down a wire.

The ground which locates in the non-inverting terminal of an Op-Amp is called virtual ground.

Not the answer you're looking for? Browse other questions tagged electricity electric-circuits terminology electronics or ask your own question.