Can we infer the existence of periodic solutions to the three-body problem from numerical evidence?

I recently found out about the discovery of 13 beautiful periodic solutions to the three-body problem, described in the paper

I am particularly impressed by how elaborate the solutions are, and I'm struck by the tantalizing hint of an infinity of other distinct orbits given by the analogy with a free group. The solutions can be viewed in the Three-Body Galery, which has animations of the new orbits in real space and in something called the 'shape sphere', which is described in the paper. 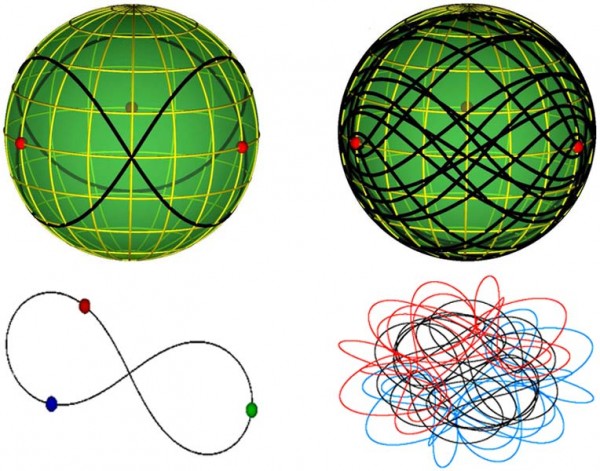 I was aware already of the figure-of-eight solution, which is described nicely in

and which was discovered numerically by Christopher Moore (Phys. Rev. Lett. 70, 3675 (1993)). I understand that the figure-of-eight solution has been proven to actually exist as a solution of the ODE problem, in

There is also a large class of solutions called $N$-body choreographies by Carles Simó, in which a number of bodies - possibly more than three - all follow the same curve. Simó found a large class of them in 2000 (DOI/pdf), though this nice review (DOI) seems to imply that formal theorematic proof that they exist as periodic solutions of the ODE problem is still lacking.

So, this brings me to my actual question. For the numerical simulations, however well you do them, in the end you will only have a finite-precision approximation to a solution of a differential equation that is propagated for a finite time. Additionally, you might do a numerical stability analysis that strongly suggests (or rigorously proves?) that you are (or are not) in a stable orbit. However, this is quite a ways away from a rigorous existence theorem for a periodic orbit with that symmetry.

With this in mind, then, in what spirit are these simulations done? Is it purely a numerical approach, in the hope that good numerics do indicate existence, but with a rigorous proof left to the mathematicians through whatever other means they can manage? Or is there some overarching theorem that indicates the existence of a truly periodic solution after a given threshold? What tools are there for proving existence theorems of periodic solutions?

It seems like they were able to rigorously prove the existence of N-body choreographies by using interval Krawczyk method to show that a minimum exist to the variational problem solved in the subspace of the full phase space satisfying some symmetry conditions.

Following the links given I found this paper where they explain the method. It's not exactly a light reading material but on page 6 they say: "If all these conditions all fulfilled, then from Theorem 4.5 we are sure that in the set $Z \times \{c_0\}$ there is an initial condition for the choreography. Moreover, as the set Z is usually very small, the shape of the proved choreography is very similar to our first approximation."

It sounds like starting with "an initial guess", they are able to show that there exist an "exact solution" very close to this initial guess. And one can probably obtain a curve that is arbitrarily close to the actual solution by doing more and more precise calculation. But the existence of the choreography is established rigorously with the assist of their numerical method.

Note that in the beginning of the paper, they mention the solutions obtained by the usual numerical methods as "solutions produced in a non-rigorous numerical way."

Not the answer you want to, but... I did readings from some sources above. And had my eyes on some N-body problems.

What can I say - non-symplectic approach at $[0,\infty]$ is unstable by default. Runge-Kutta, any quantification methods - unstable. Absence of stability is the general issue. It holds for many $[0,\infty]$ problems.

Searching for periodic $[0,T]$ is almost the same as solution of $[0,\tau]$ with some nuances.

But basically, there is no answer to the next question (which is basically ergodic, but more deep and sophisticated as $3n+1$ problem):

How much time does it require for body to get free velocity and quit the system as a function of given initial conditions?

The symplectic approach can create virtual "real" solution to which you are moving with some series or another expansion technique. Then, you can extract series over series and turn problem into symbolic chaos. There is field of current research too.

App1. What is this so called "choreography"?

They have solution of numerical problem, but no proof that this numerical scheme is absolutely integrable into real orbit. For integration into orbit, one must describe mechanism with which adding more computation, allows to have $$\Delta(\text{solution at any time})<\epsilon$$ for any given $\epsilon$ and any given time. Every existing technique with quantized time integration leads to $$\Delta(\text{solution})\sim \exp (t). $$

So it could not be absolutely integrable, you are not free at choosing $\epsilon$.

4
Minimum number of charges in an oscillatory system
6
Proof of unsolvability of $n$-body problem for $n\geqslant 3$ in general
2
Multiple star system, stable orbits?
0
Details of the new solutions to the three-body problem
1
Is there any efficient additive way to improve field uniformity from a single charge sign?
1
A question about the numerical simulation on classical three-body gravitional system

10
Some Korean researchers saying that they solved Yang-Mills existence and mass gap problem
3
How to approach a 2-body problem in General Relativity?
2
Is there still scientific research to be done on the Three-body problem (on a relativistic point of view for example)?
23
How do computers "solve" the three-body-problem?
1
Kinds of orbits in two-body problem
1
Analytic solution to the Kepler problem from position + velocity initial conditions