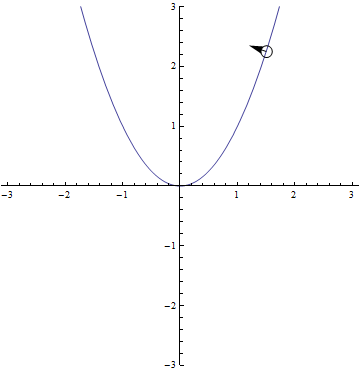 but please ignore the fact that the center of the ball is on the surface instead of the edge.

I initially expected this to be true even after the ball begins sliding down the surface, but I found that it was not. Intuitively, I understand that a velocity with a non-zero component in the normal direction affects the strength of the normal force. This seems like the same mechanism by which the normal force is able to stop a falling object as it hits the ground, for example.

In the falling ball example, the relationship between velocity and normal force seems a bit sticky mathematically. Assuming neither the ground nor the object compress, the normal force would have to be infinite initially, right? It would only be infinite for an infinitesimal amount of time (so the integral would still be finite). However, in that case, the $v(t)$ curve is discontinuous, while it seems like $v(t)$ would be continuous for a ball sliding on $y=x^2$, so hopefully the relationship is less obnoxious in the continuous case.

Note: I also see a conservation of energy solution that sidesteps the normal force issue altogether, but I'd like to understand the forces aspect.

and the direction vectors are

note: this area of study is called differential geometry (Frenet formulas). Look it up.

All you need is Newtons law and the fact that the force from the surface is the normal force since you have no friction. Then draw a diagram and see that $N_x/N_y=df/dx=v_y/v_x$. Then solve $F=d\vec{p}/dt=m\vec{g}+\vec{N}$. If you need $\vec{v}$ aswell use energy conservation and initial condition.