How do horseshoe orbits work?

An asteroid was recently discovered that is in a horseshoe orbit with respect to the earth. Is there an intuitive explanation for these orbits? It seems that the earth acts as a repulsive force where one would expect gravity to be attractive. From the above linked article:

Accepted in MNRAS, Apostolos A. Christou, David J. Asher, 1104.0036, A long-lived horseshoe companion to the Earth 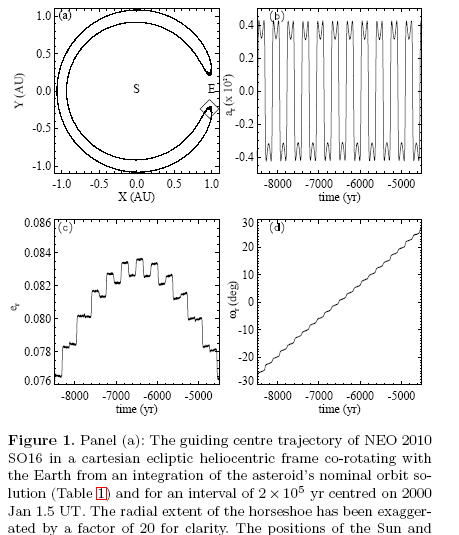 A better description of the horseshoe orbits, along with the tadpole orbits and Lagrange points: 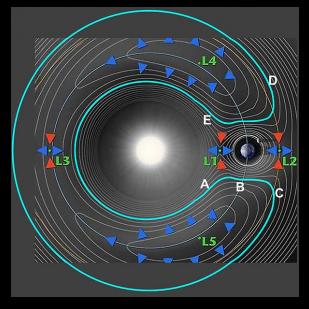 The horseshoe orbit shape does occur only in the reference frame of the Earth’s orbit. It is a manifestation of a third body problem, and the orbit is in an accelerated reference frame. The loop, which is this distended horseshoe shape, has no central gravitational source inside the loop. As a result the orbit is a “pseudo-orbit.”

From the perspective of an inertial frame in heliocentric coordinates this asteroid is in a circular orbit (topologically a circle) around the sun. When the orbit is closer to the sun than the Earth’s orbit the asteroid has a smaller orbital period, or equivalently it has a larger velocity. It will eventually catch up with the Earth, but it is not necessarily gravitationally drawn into the Earth. It interacts with the Earth’s gravity field in its frame with an effective and repulsive potential $L^2/2mr$, $L$ = angular momentum $r$ = distance from Earth. The gravitational potential plus this effective potential pushes the asteroid into a higher orbital radius. The Lagrange points $L_4$ and $L_5$ act then as attractor points in the rotational frame of the asteroid. Its orbital velocity is now smaller and recedes away from the Earth. Eventually the Earth approaches the asteroid and the process is repeated.

This is a “hunter-chaser” type of orbit. The thinner the horseshoe is the smaller the angular momentum L is with respect to the Earth at close approach. This means the gravitational attraction can become larger. This is a physical way of thinking about this. Technically this problem requires using Hill’s method for the 3 body problem.

Not a direct answer to your question, but in relation to horseshoe orbits ..

Some years ago, a paper was published showing that as the Earth accumulated its mass during the formation of the Solar System, a nearby object in a horseshoe orbit relative to Earth, like this asteroid, would almost inevitably also form and grow, given all the debris floating about, but would later become unstable and crash into the Earth.

I wasn't organised enough to note the reference, and I'm not sure how well that theory squares with the Mars-sized body collision, which seems to be the accepted explanation these days; but if this horseshoe mechanism was involved, which seems quite plausible, then for Earth-like planets in other solar systems a moon, with a similar mass ratio and distance of ours, might be not a rarity but almost inevitable.

Not the answer you're looking for? Browse other questions tagged gravity celestial-mechanics or ask your own question.

7
Planet orbits: what's the difference between gravity and centripetal force?
7
How is it possible for orbits to maintain stability?
1
Would a celestial body in a horseshoe orbit be tidally locked to the planet?
0
How to simulate orbits?
0
How velocity affects different orbits?