does the beam of a laser have 'throw'?

I was thinking about Einstein's train and platform experiment and was wondering if a beam of light experiences throw? Let me explain, if I take a water hose and point it straight out and then swing and stop my arm, the water will for a moment go past the end of the hose in the direction I was swinging my arm...

Does light exhibit the same behavior? If I took a laser and started from the origin of a Cartesian system and accelerated it to let's say 75% of the speed of light along the x axis with it pointing in the y direction. When said laser pointer hits a brick wall at x0 will the laser beam actual cross to x0+delta?

Interesting question. The answer is yes, a light beam has throw.

If we imagine that photons look like tennis balls and move quite slowly, we can see it from the following diagram: 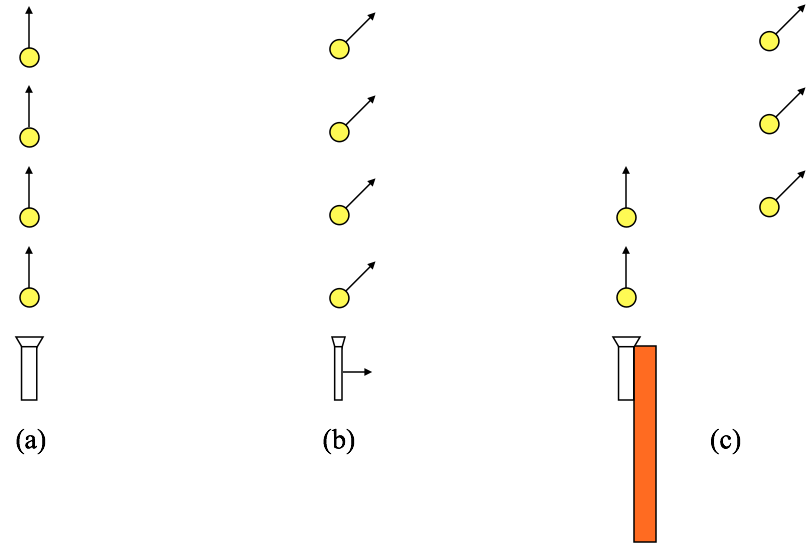 $(a)$ shows the laser when it's stationary, emitting a steady stream of tennis-ball photons, one per second. $(b)$ shows a similar laser moving at about $70\%$ the speed of light. Each photon is still travelling at the speed of light, but they're now travelling at a $45^\circ$ angle. This means that the $y$ component of their velocity is less than $c$, but the distance between them is the same. This is because of time dilation: the tennis balls are emitted less frequently from the moving laser. A clock moving with the laser would also run slowly, so that it would still measure one photon emitted per second. (Length contraction only occurs in the $x$ direction.)

Note that since the photons from the moving laser have a slower $y$ component to their motion, the ones from the stationary laser will "overtake" them in the $y$ direction. This means that if the laser is shining onto a distant screen parallel to the $x$ axis, there will for a time be two spots of light on it -- one at $x_0$ and the other moving to the right at about $0.7c$, composed of photons emitted before the collision.

The difference between this and the case of a hose pipe is that the water molecules from the moving hose are moving faster than the ones from the stationary hose, because their velocity is just the sum of their motion through the hose in the $y$ direction, plus the motion of the hose itself in the $x$ direction. In the relativistic case the photons always have to move at $c$, with time dilation and length contraction occurring to make this consistent. But apart from that the phenomenon is the same.

Not the answer you're looking for? Browse other questions tagged general-relativity optics laser or ask your own question.

16
Physics of Focusing a Laser
1
How to calculate reflection profile of a beam shining onto a moving mirror?
5
Understanding the behavior of light/photons inside a Laser
0
Quality High Intensity Laser for Interference Experiment
5
How can beam divergence be corrected for in a $\rm CO_2$ laser cutter?
142
Why does a mirror split my laser beam?
3
What is the likely source of these interference/noise patterns in my DIY laser micro-projector?
0
Using beamsplitters for co-axial light paths
2
Where does laser reflection (1) come from?