Why does aperture size affect depth of field in photography?

I wondered if I should ask this on photo.stackexchange.com, but then realize that I want optic based answer which I think will get here.

The effect, aperture give to the depth of field is caused by the "used part of the lens".

As the a system of lenses can only make a certain point being focused, there is the need of a trick to gain a high depth of field. This is (not only but also) done by the small aperture.

The reduction of the used part of the lens leads to less aberrations for the not perfect focused light paths. You see the Parts (1) and (3) in the image being mapped better focused on the "photo plate" (5). The light paths from (2) are unaffected, because these are perfect focused. As you use a smaller part of the lens, your image will become more dark as is illustrated in the darker background of the "photo plate" on the right. 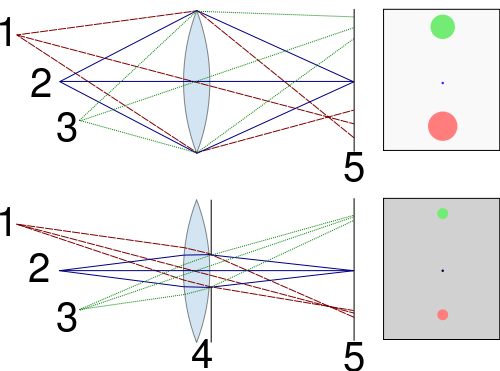 If you want an intuitive answer, the depth of field indicates the interval of distances in which the image will be approximately on focus. When you reduce the aperture, the light cone narrows. This means that you would observe that the confusion circles are smaller. Hence, the range of distances where the image is on focus has increased.

A formula for the far-field case (large distances) would be:

Depth of field is a perception phenomenon which factors in the HVS (human visual system). It is really a game of "how much blur can we have until it becomes objectionable?" There is only one "plane" (usually really a segment of a sphere) which is in focus. At that point the imaging system performs in accordance with losses such as atmospherics and the MTF (modulation transfer function) of the lens.

As an object moves off that plane, it immediately becomes "out of focus" and there is a point spread function which describes a growing disk which is in some circles (no pun intended) called the "circle of confusion."

The resultant image is one which is the convolution of the target image and the point spread function. At least for non-coherent imaging. So the perception of the depth of field is linear with the f-stop and focal length.

Unfortunately, depth of field has it limits, and a very very small aperture will not provide nearly infinite depth of field, because diffraction plays a greater role, in blurring the image, as the aperture gets smaller.

So what really happens with depth of field is that objects are not really in focus off the focused plane, but rather the blur is considered negligible. Think of it this way: a thumbnail photo might look clear, but if expanded to be an 8x10" photo, it may be unacceptably fuzzy. So acceptable depth of field is a determination of the effect of the impact of an off focused image on the observer, given the optical system (atmospherics, lens, sensor/film, and rendering/printing process) and the perception perspective (how big is the viewed image).

In practical application, a so-called hyper-focal setting on a lens, may give an acceptable image of a scene when viewed on a small format display or print, but when expended or enlarged, will yield a more fuzzy appearance as it is in reality not completely in focus through the "depth of field."

As a photographer and physicist myself, I am trying to explain this phenomenon to my musician friend who has just bought an expensive camera.

The best I can come up with is to take, at the extreme, a pinhole camera with infinite depth of field. As we stick a lens in front and widen the aperture it becomes closer to the familiar situation with object and image distance determined by focal length.

1
Experiment regarding myopic correction by a manipulation of fingers?

1
Is it possible to enlarge the output angle of a projector with outside lens?
4
Why do focal lengths affect magnification?
2
What defines camera's size?
0
System of Lenses. Virtual Objects and Nature of Image (Real/Virtual)
2
How does light focused through a lens create bokeh (blurry background)?
13
Why do diffractions spikes from small aperture not have fringes?
0
Why do we need an objective lens in a scanning electron microscope?
0
Why does the focusing efficiency drop with numerical aperture for a microscope objective?