Particle Spacing in a Vacuum

Four questions: (To start off, I know very little about physics it isn't even funny (I probably use a ton of wrong terms here and leave out vital information, if so I will try to edit it in as you point it out!), Anyways, I have been always curious about this scenario though so I finally figured I'd ask some people who actually know what they are talking about)

First question: Theoretically speaking, if I have a vacuum that is a closed system, it's made of walls that are 100% nonreactive and have no electromagnetic force, strong force, weak force, gravitation force, or anything, but they can still restrain things placed inside the box (without any interaction on the particles, but instead just by the laws of this system)

If I place 1 particle in the box will it stay exactly where I placed it, or will it somehow move to the center of the box thus distancing itself as far as possible away from each wall? (I've drawn a 2D demonstration) 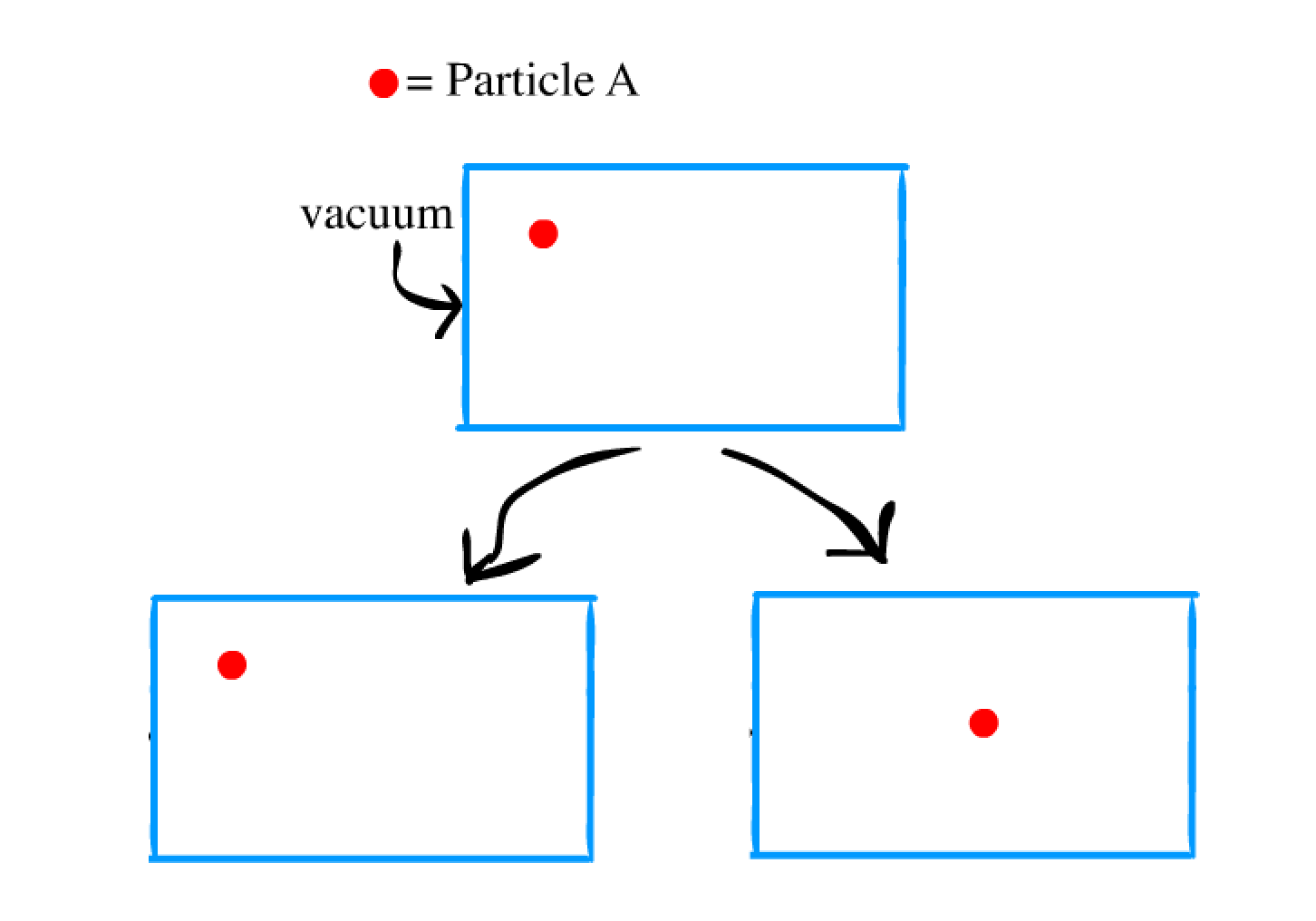 Now, if I place a second particle in, will they both stay where I placed them, will they divide the box in half in some way (I just gave 1 example, there are many) and then both move to the center of those halves, will they space themselves as far apart as possible (pushing themselves against the nearest corners of the box), or is there some ring of energy around particles that I don't know about that has a statistical radius and they would just distance themselves as much as the "reach" of this ring so that the rings aren't touching?

Or will something else happen?

Second question: I'm assuming different things will happen if the particles are different things, for example if Particle A was a proton and Particle B was an electron they would just pull together? Or the electron would begin orbiting the proton (Or would they even both start orbiting each other?) (If either of these are the case what determines if the orbiting is clockwise or counter-clock-wise (Or whatever the 3D equivalent of these would be, does spin determine?)? What are some particles that would react different ways, for example 2 photons, a proton and a proton, a proton and an electron, etc. Or would it not matter?

Third and Fourth questions: What would happen in the same scenario except the walls are reactive, they are made of steel, or carbon fiber, or something strong enough to support a vacuum?

According to the laws of quantum mechanics (you might have heard of the uncertainty principle) if you place a particle in a given position, e.g. near the corner, you are doing so by measuring its position with great precission. This means that you loose all precission about its velocity, therefore in a given instant after you placed the particle it could actually be anywhere within the box, not necessarily the center. There will be a certain probability density that it will be found in any given place of the box. If you add a second particle, then things depend of the type of particles you are dealing with (recall all particles are either fermions or bosons). If both particles are distinct (no matter if they are bosons or fermions) then they can "occupy the same point in space" without problems, the same happens if they are bosons (whether of the same type or not), but if you placed two identical fermions in the box there will be some kind of effective repulsion between them (coming from Pauli's exclusion principle), so in some sense there are some "rings" preventing the particles to get too close to each other (i.e. of having the same quantum state), this is the force that makes everyday matter seem solid.

Pairs of particle with the same charge will not bind in the conditions of the experiment. Photons will not bind under any known circumstances, so far as I know.

Third and Fourth questions: In a real life experiment with reactive walls things will complicate, in principle there is a chance the particles can escape of the box by tunneling effect (this also depends very strongly of the energy the particles have), but most importantly it is almost certain that they will interact with the walls and eventually they will not be the only particles in the box, there will be "parts of the box" inside.

Chances are it will be very difficult to even be sure that you are observing the same particle in the conditions of the experiment, unless more constrained conditions are inforced on the particles (as a light-trap for cooling)

Not the answer you're looking for? Browse other questions tagged quantum-mechanics electromagnetism vacuum particle-physics or ask your own question.

5
Creation of particle anti-particle pairs
1
How to measure the pressure on the walls of a potential box by a particle inside?
2
Observing a particle over a certain domain
3
Is the only difference between two particles their location and momentum?
1
What experiment(s) have or can refute the existence of an electron-particle "system" over the separate existence of a neutron within itself?
9
Why is an electron considered a point-particle?
0
Slow down electron in zero gravity vacuum
3
Can we think about a particle trapped in a potential well in terms of "quantum measurement"?