Gravity - What happens when two objects of unequal masses fall freely towards the ground? (Revisited)

The common perception regarding what happens when two objects of equal sizes but unequal mass are allowed to fall freely towards the ground is that - both the objects make contact with the ground at the same instant.

This is attributed to the fact that the acceleration of both the objects towards the earth are the same for a given height. This was the reason for Galileo's expirement.

Note : I am ignoring the fact that the lighter object would also attract the heavier object (but to a lesser extent) and since the earth moves approximately in the same direction as a result of the attraction from the other two spheres, that is also ignored. Otherwise the earth can be said to move diagonally towards the heavier object (again to a small extent).

I have included an illustration showing the movement of the lighter object towards the heavier one. 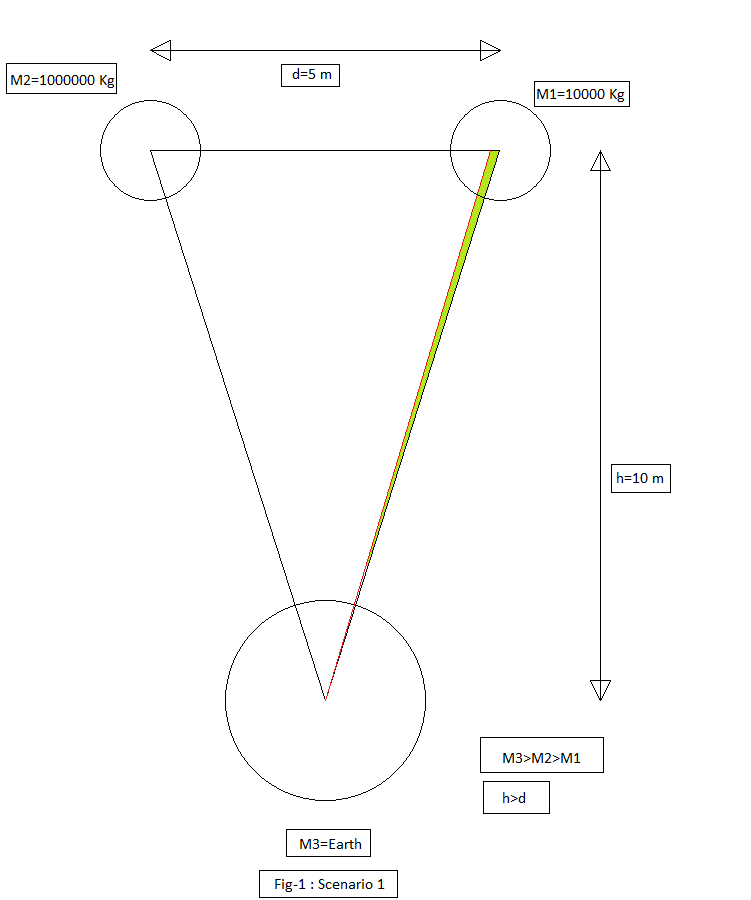 As such the lighter object should fall first is it not?

Note : Generally, the two objects are placed close to each other (the distance-d between the objects is lesser than the height-h from the ground - 'd < h' ).

Continuing with the same logic, I have the following understanding :

1.) From a height greater than the distance between the two spheres, the lighter sphere makes contact with the ground first.

2.) From same height as the distance between the two spheres, both the spheres make contact with the ground at the same time.

3.) From a height lesser than the distance between the two spheres, the heavier sphere makes contact with the ground first.

a.) The ground is also a sphere.

b.) The distance between the spheres are measured from their centers.

Is my understanding correct?

I also found this Phys.SE post. Which speaks of a scenario where in only two objects are involved. My question is similar to it.

PS: I have blogged about it before as well, saying it is so and also elaborated on two other cases ($d=h$ and $d>h$). 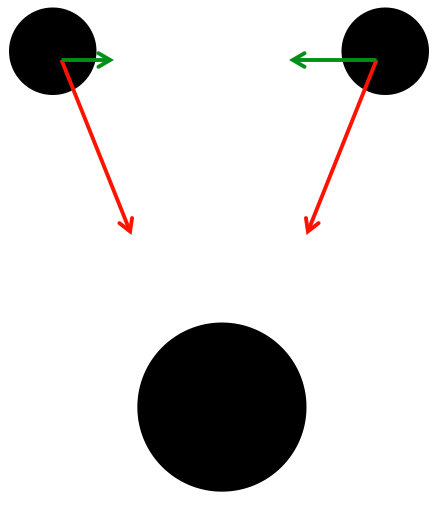 The less massive planet will have a larger green arrow, and the larger of the two green arrows has a greater contribution to the component of acceleration in the radial direction (radial, as in the line connecting the smaller planet to the biggest planet). This means that, in this instance, the less massive planet is accelerating slightly faster than the slightly more massive planet towards the biggest planet. From this, it is sufficient to assume that... drumroll the smaller planet will hit the largest planet first!

This is true for all values of d and h, assuming the values don't cause the smaller planets to collide with each other first, and that the path between each smaller planet, and the largest planet is approximately straight. (i.e. d is above a critical value)

At a latitude of 45 degrees, the value of g varies by approximately 0.001 m/s^2 per degree latitude, which means that, if one mass is dropped from a point 5 m further north at that latitude, then its value of g will be roughly 4.5e-8 m/s^2 lower than the value for the other one, and it will hit the ground very slightly after the other one.

That's if one doesn't hit a can of worms.

Two objects of unequal masses, ignoring other forces would be attracted by at the same velocity provided by the acceleration due to gravity. But objects with less mass are generally less dense, causing other agents to friction it's movement to the ground, while object which are more dense and have more mass will be more rigid to that force. This would cause the object with more mass to reach the ground faster than that which has less mass

Only if the situation is symmetric and the masses are aligned like an equilateral triangle all masses will meet each other at the same time:

Well the purpose of the statement "both the objects make contact with the ground at the same instant" is to convey the fact that the gravitational acceleration does not depend upon mass of the falling object.

The experiment could have been done by dropping two bodies at different times and measuring the time they took to reach the ground and that would have given same results.

What you are pointing towards is - negligibles. Yes, there can be negligible effects due to simultaneous fall of two bodies but that does not change the message that was supposed to be conveyed.

Here is the output from a program I wrote - it analyses which of the to masses between mercury (mer), venus (ven) and earth (ear) start coming closer (the third point in my question above where the heavier object is noted as making contact first - the earth is the reference ).

From the below output we can see that after starting off with the same distance between them, venus and earth are closer to each other than earth and mercury.

the cog-dist - is the distance between the centre of gravity between two masses.

gvt-a-to-b is the acceleration due to gravity - exerted by body a on body b. I mentioned the calculation logic only in the end calculation since the max 30000 chars was reached otherwise.

The mass and diameter references are from here

Not the answer you're looking for? Browse other questions tagged newtonian-gravity free-fall thought-experiment or ask your own question.

241
Don't heavier objects actually fall faster because they exert their own gravity?
1
Different masses in free fall towards a massive body
1
Hammer will fall faster than the feather on the moon. 10 second thought experiment!