Intuitively, Why is Power Proportional to $I^2R$

As the resistance of a circuit goes down, the power increases because the current increases, assuming constant voltage. Why is this? I feel like resistance and current are inversely proportional, so lowering one should just raise the other, and power should stay relatively constant. What is it about power that makes it work like this? Edit: Again, namely I find it confusing that decreasing resistance actually has a net increase in power used. I feel like while the current will increase, it should be countered by the lowered resistance...

I find this sort of thing becomes much more intuitive if you can think of an analogy in terms of water. In this case, we can think of it like this: 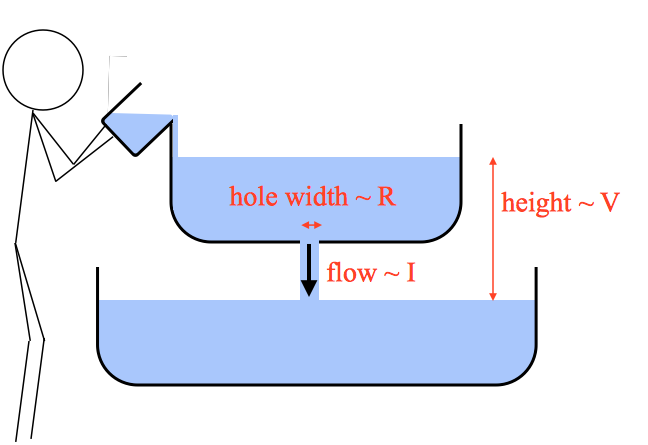 Here we have water flowing through a hole in a bath tub, into another tub underneath. The stick figure has been given the task of keeping the water level constant, by lifting water back up into the top tub using a bucket.

Water plays the role of charge in this analogy, so a rate of water flow is analogous to electrical current. In this situation the water flows through a small hole, which represents the resistor. A small hole tends to resist the flow of water, so it's analogous to a high resistance. A large hole would represent a low resistance.

If the stick figure lifts $m\:\mathrm{kg}$ of water in her bucket, she must do an amount of work equal to $mgh$. If she lifts $I\:\mathrm{kg/s}$ then she must expend power at a rate $P=Igh$ Watts. If we compare this to $P=IV$ we can see that the height difference between the two tubs (multiplied by $g$) plays the role of $V$ in this analogy, and by maintaining the height difference, the stick figure plays the role of the voltage source.

Now we have everything we need to see intuitively that the power must increase as $R$ decreases. First imagine that the hole in the top tub is very small, so that the water just drips gently through it. This represents a large resistor, and you can imagine that the stick figure doesn't have to do a lot of work to keep the water level constant, because the water is being drained very slowly.

However, if you make the hole bigger then the flow rate of water will increase, and now the stick figure will have to work harder to keep lifting buckets of water to counter it. The bigger the hole (i.e. the lower the resistance), the faster the flow, so the more buckets of water she has to lift per second to maintain the water level, which means she has to spend more power to do it. Hopefully in this analogy you can see that the low resistance doesn't cancel out the faster current. Instead the faster flow is caused by the low resistance. The power itself doesn't directly depend on the resistance, but only on the voltage (or height difference) and current (or rate of water flow).

I've calculated the power that the voltage source (stick figure) puts into the system, rather than the power dissipated by the resistor. However, by the conservation of energy, these have to be equal. In the water system, the stick figure puts energy into the system in the form of gravitational potential. This is dissipated by viscous friction as the fluid flows through the hole and settles in the lower container. In the electrical case the battery puts energy into the system in the form of electric potential, which gets dissipated in the resistor. But the principle is the same: in both cases the power you put in has to equal the power that comes out as heat.

The resistance is a property of the materials in the circuit (e.g. copper) and the shape of those materials (e.g. a long thin wire). The resistance describes, via Ohm's law, the current $I$ that will flow for a given potential $V$ applied across the material. Usually in a circuit, we treat resistances as constants though temperature and aging can affect the resistance. If you build a circuit, you will buy resistors with particular $R$'s and the resistance will match the requested value to within some tolerance and under a specified range of conditions (usually temperature).

The power you are referring to here is power loss in the conductor with a fixed resistance $R$, set by the material properties. The formula you want to look at is $P=I V$ where $I$ is the current and $V$ is the voltage drop need to drive the current $I$ across the conductor. The voltage needed is given by Ohm's law $V = I R$. Making the substitution, we get $P= I^2 R$.

For example, if you want to pass 1 Amp though a long wire with a 2 Ohm resistance, you have to apply 2 V across the wire using a battery or other source. Every second, that 1 Amp corresponds to 1 Coulomb of charge passing across that wire and dropping down a 2 V potential hill, dissipating the potential energy into heat in the wire. The power is then 1 Coulomb * 2 V / 1 second = 2 J / second = 2 W dissipated in the wire. If you want 2 Amps, you will need twice the voltage to drive it through the wire and you will get 2 Coulomb * 4 V / 1 second = 8 W dissipated in the wire.

It helps if you see the power as the rate at which the energy from the battery is being converted to some other form of energy, which in case of a resistor is heat. As you rightly mentioned, current and resistance are inversely proportional. But power is actually found using P = VI, and for the case of constant voltage across a resistor (as you mentioned), we would use the I-squared expression (its just easier). Thus, the I-squared expression is merely a convenient way of measuring power in a resistive circuit and is not meant to show any kind of peculiar characteristic or variation of power with current.

I feel like while the current will increase, it should be countered by the lowered resistance...

Your intuition here would be correct if the resistor power were a linear function of the resistor current. For example, suppose that

then, applying Ohm's Law would give

and, thus, a constant power for a constant voltage and your intuition would be correct.

the power is doubled.

Electric power is given by:

Looking for something else accidentally found your conversation Probably is useless after 3 years but let me make a comment Nothing new, but putting it in on other way Keeping the current fix in the formula Q=I2Rt, shows that the energy amount converted to heat in a resistor is proportional to the resistance. This is because in order to keep the current fix, changing the resistance (double it), for example I must also double the potential according to the ohm’s law I=V/R On the other hand this formula Q=(V2/R) .t shows that keeping the potential fix, the produced heat is inversely proportional to the resistance

5
Why high voltage transmission lines?
0
Resistance & temperature of semiconductor
4
How power lines use high voltages with a low current?
2
Solving circuit problems
9
Contradiction in Ohm's Law and relation $P=VI$
0
Ohm's Law Complications
1
When high voltage leads to low current in power transmission system how its not applicable for household voltages?
1
How same power is distributed in different voltages in power lines?
0
Voltage drop and power dissipation
1
Is resistance or voltage more effective in reduction of power loss?