When can a surface charge density exist?

I don't really see though, how this can be explained. They seem to imply that there is a relation between the conductivity and the possibility of a surface charge, but I can't figure how they are related.

They also state somewhere earlier that there can't be a surface current between two lossy dielectrics. This seems to be analogous to my previous question. I thought that this was due to the fact that dielectrics don't conduct current, but I wonder if someone knows a better explanation here too (that perhaps explains why they explicitly mention that the dielectrics are lossy).

The following relation describes the total electric flux density in a medium:

The previous equation shows the “induced” or “effective” volume charge density in a medium as a response to the external electric field. Now let us consider what happens in the case of perfect dielectric (non-lossy) and perfect conductor.

In case of perfect dielectric, the induced volume charges can’t move. This means they are going to stay where they were induced. The charges stay in the volume. In the case of perfect conductor, the induced charges move freely, such that instead of being distributed in the volume they all go and accumulate at the surface from which the electric field is applied. The number of charges or more accurately the surface charge density is just enough to cancel the external electric field within the medium. This basically means there won’t be any other charges induced in the volume.

To make it clearer, have a look at the attached figure. Figure a shows the dielectric case, where charges are induced in pairs but they can’t move. That is why they are distributed everywhere. Figure b shows the perfect conductor case, where all negative charges moved to surface creating surface charge density. The positive charges left behind were neutralized by negative charges coming from ground. That is not a concern in your question. Figure c shows the two lossy dielectrics, if surface charge accumulated on the surface separating between the dielectric, it will eventually move to the boundary at which the external field is applied. 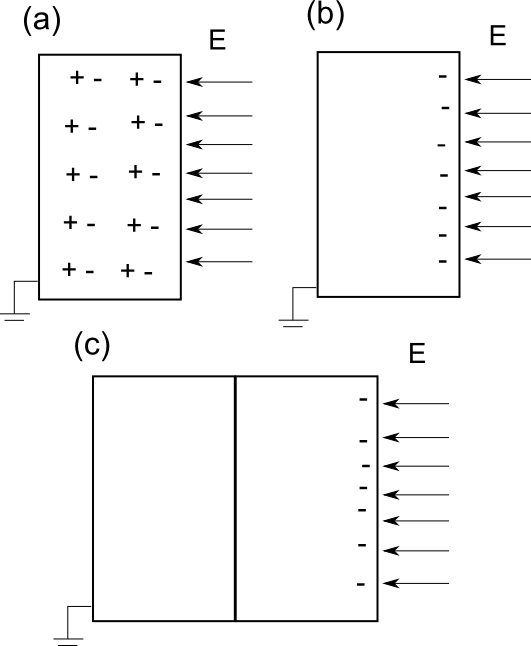 Epsilon is the permittivty of material, sigma is the conductivity of the material. For perfect conductor sigma is infinite and the relaxation time is zero, which is why it is instantaneous.

I recommend you to have a look at chapter 5 in Sadiku’s book “Elements of Electromganetics”. It describes more details on the same topic

Hope that was useful

A simple line is as follows:

One cannot write $\nabla \cdot \vec E$ on the surface, because $\vec E$ is not continuous there. However, surface charge can make $\vec E$ be non-zero outside the boundary and zero inside the volume.

The reasoning applies to conductors and conducting materials, but does not apply to dielectrics. However, this does not mean, that dielectrics cannot have surface charges.

Not the answer you're looking for? Browse other questions tagged electrostatics charge density or ask your own question.