How Does Cosmology Constrain the Number of Neutrino Species?

I know that based upon theories of structure formation cosmologists can constrain the sum of the masses of neutrinos - if neutrinos were too light or too heavy it would simply change the power spectrum of the universe.

My question is how exactly is the number of neutrino species constrained by cosmological measurements (i.e. - $N_{eff}$ as measured by WMAP or Planck)? The recent results from the Planck Satellite give us $3.3\pm0.3$, which is consistent with three neutrino species. How is this measured?

There are two aspects to your question: the number of neutrino species and the sum of neutrino masses. These two aspects reflect the unusual property of neutrinos: on the one hand, cosmic neutrinos move at relativistic speeds and in the early universe they have very high momenta. This means that high-energy cosmic neutrinos behave much like photons, in particular when the universe was very young. On the other hand, they have a small non-zero rest-mass, so they also contribute to the matter content of the universe, along with baryons and dark matter. 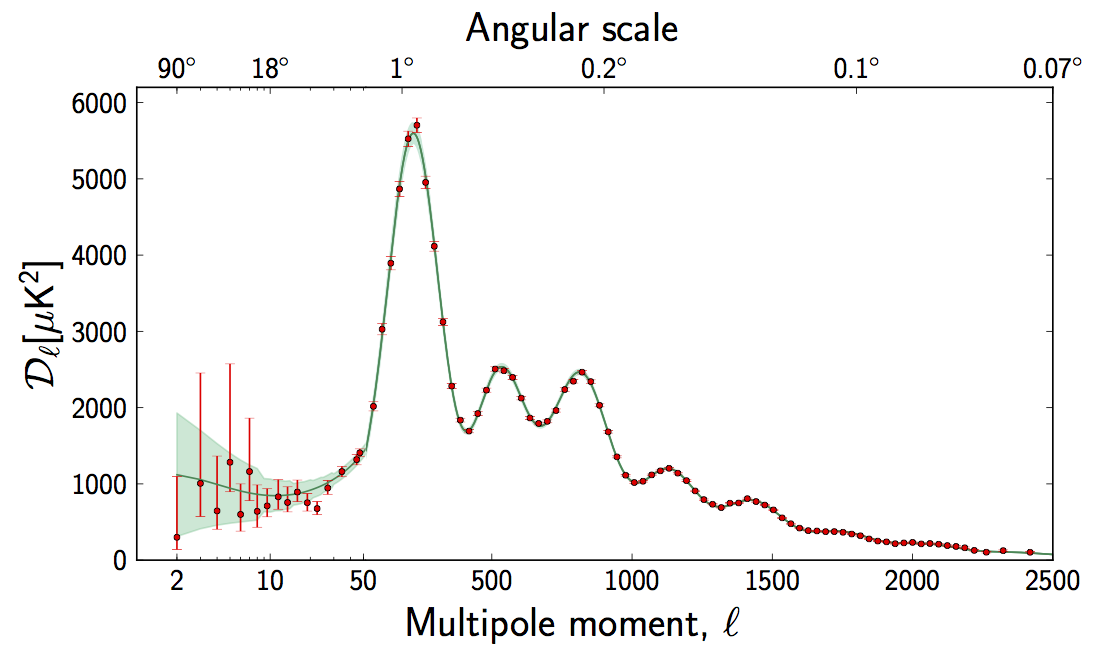 The rest-mass energy of neutrinos has a different effect. First of all, baryons, dark matter and neutrinos have discernible properties: in the early universe, dark matter and ordinary matter accumulated into local potential wells, but neutrinos didn't because they were too energetic. In addition, baryons are hindered by radiation pressure, while dark matter isn't. Therefore, baryon and dark matter densities can be determined independently from the neutrino density (in particular, from the relative heights of the second and third acoustic peak).

Once the amount of baryons and dark matter is known, the rest-mass neutrino density can then in turn be derived from the total matter density $\Omega_{M,0}$. This matter density becomes the dominant term in the expansion of the universe after 50,000 years and remains the dominant term for billions of years, until dark energy becomes dominant. In other words, the higher the neutrino mass, the higher the total matter density, and the higher the expansion rate of the universe at intermediate age, in particular right after photons and matter decouple. A higher expansion rate suppresses large-scale structure formation in the first few million years, and this in turn has an influence of the gravitational redshift of CMB photons as they pass through these potential wells. This redshift is called the Integrated Sachs-Wolfe Effect, and can also be derived from the CMB spectrum (notably around the first peak).

Not the answer you're looking for? Browse other questions tagged cosmology neutrinos cosmic-microwave-background or ask your own question.

5
Do oceans produce the cosmic microwave background?
2
How strong are the experimental constraints on the neutrino helicity really?
2
Neutrino massless species
3
What is meant by the absolute scale of the neutrino mass?
0
Estimate of neutrino masses from the values of $\Delta m_{21}^2$ and $\Delta m_{13}^2$ only!
3
Is there a bound on the number of sterile neutrinos from cosmological observations?
3
How does the CMB constrain the baryon asymmetry?
5
Why is the Planck/WMAP estimate of the age of the universe preferred?
0
What is the 'effective number of neutrino species'? And how does that, rather than the total number of them, affect the universe?