Intuitive understanding of the definition of entropy

In Wikipedia, the definition of entropy goes like this: $ d S = \dfrac{\delta q_{\rm }}{T}$. The literal interpretation of this equation is that some amount of heat transferred into a system, if the temperature of the system is high, the entropy is low. Wikipedia also said that the entropy stands for the "waste energy" which means the amount of thermal energy that cannot be used to do work. So entropy is a function of the state of a system.

My question is, why does the equation above mean "waste energy"?

There are a few similar questions I found here (like The definition of entropy), but I don't think they address this "waste energy" concept.

Yes, this is a nice way of thinking about energy.

Consider the Christmas toy shown below. The candles create hot air, which rises through the fan blades and spins the angels around. This is a simple heat engine. It only works because there's a temperature difference between the hot air below and the cold air above. For example, you could put the engine in a room where the air was very hot, but if it was uniformly hot, the engine wouldn't spin. 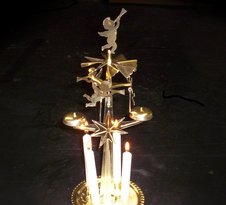 This shows that if we let hot and cold matter reach an equilibrium, we have less energy available to perform mechanical work. There is just as much energy as before (energy is conserved), but not in a form we can use, because now the temperature is all uniform.

Now look at the equation $dS=\delta Q/T$. Say we have some hot matter at temperature $T_H$, and some matter at a lower temperature $T_L$. We allow some heat $\delta Q$ to be conducted from hot to cold. The entropy of the hot matter has changed by $-\delta Q/T_H$, while the entropy of the cold matter has changed by $\delta Q/T_L$. The latter number is positive and greater in absolute value, so the total change in entropy is positive. This tells us that there is now less energy available to do work. The energy is still there, but it's wasted for our purposes.

Without looking at your reference definitions, I would suggest that you think of entropy as a measure of the smoothness of how energy is distributed. You can have lots and lots of energy, but if you don't have differences in the levels of a particular form of energy, then can't do anything interesting with it, such as convert it into another form -- heat to chemical (life), chemical to heat, motion to heat, or heat to motion, for a few examples.

"Waste energy" is not the phrase I would use to describe homogeneity of an energy type, but it does sort of capture the idea that you can have a lot of energy sitting around and still not be able to do anything interesting with it.

The smoothness could be temperature, meaning that if everything is the same temperature exactly, no heat engine in the universe can convert that energy into some other form such as motion. Conversely, if everything under consideration is moving homogeneously -- as in special relativity -- there again is no way in the universe to convert the energy of motion within that system into heat.

Since it is a bit uncommon these days to express entropy in terms of smoothness in the spatial distribution of temperatures, I did a little digging. I was genuinely surprised to find that the original application for which Joseph Fourier proposed his famous transforms was to characterize the spatial distribution and evolution of temperatures in a system.

As described in this online book chapter, in 1807 Fourier was interested in heat propagation, and used sinusoidal sums of temperature variations to provide a detailed representation of his systems. It's also interesting that Joseph-Louis Lagrange excoriated Fourier for the idea, and managed to keep Fourier's paper from being published for 15 years. What was Lagrange's key objection? Fourier transforms are lousy at representing corners! That of course is still an issue for pretty much all wave representations of spatial images, as demonstrated for example the blurring artifacts commonly seen around the sharp edges of overly compressed images.

In contrast to Fourier's richly detailed representation wave-sum representation of temperature distributions and flows, much of the math used to express entropy these days is pragmatically focused on calculating the net efficiency of heat engines. For that situation you can in many cases get away with representing the complex distribution of temperatures in real systems as just two highly abstracted temperature regions, separated by a distance that is not even specified. Since you cannot discern sinusoidal components from just two magnitudes separated by an indeterminate distance, all the detail and beauty of the more complete entropy picture is lost.

It's worth noting that since such abstractions don't even specify an explicit separation distance, the idea of "smoothness" just becomes an issue of commonality of temperature. If the two temperatures you can see are the same, you can say that the system "sort of" looks smooth, or high in entropy. It's a bit like being given two tiny pictures of an elephant's hide, and then being asked whether or not the elephant is "uniformly gray." If you carefully preselected only elephants that have a maximum of two shades of gray on their body, each contiguous, and you made sure that your two samples would always represent both regions, it's a doable task. You can look at both samples, and if they are identical, you can say sure, the "graytropy" (sameness of its grays) of the elephant is maximal.

A more realistic view of entropy in actual systems, however, must break out of any such highly simplified abstraction of the temperature profile of a system. Fourier's original sum of sinusoidal forms is not the only way to do it, but it's certainly an elegant one. What Fourier did amounts to deriving a rainbow of spatial frequencies to characterize system-wide temperature variations. His rainbow includes a simple but profound message: As long there is even a glimmer of color showing in it, the system is not yet dead. You can still in principle squeeze a bit more work (or life) out of it, at least in principle.

But if you have already burned through all available sources of potential energy, Fourier’s temperature rainbow must inevitably go dark. When that happens -- when there is no longer the slightest ripple of temperature variation across the entire system, at any scale -- then that ripple-free form of smoothness we call entropy has truly and finally won out. The system is dead, both figuratively and literally, for eternity.

During the era of the birth of entropy (around the mid eighteen hundreds) Clausius and others were studying the efficiency of irreversible processes in steam engines, where part of the energy was lost.

Thus from an historic perspective entropy was (rightfully) related with the problem of heat losses. It is still common to talk about entropy in schools only in regards of the efficiency of thermal machines. But the scope of the idea of entropy is wider than the problem efficiency in heat engines.

More recently, the concept of entropy has also been used for: