The figure shows two blocks on an inclined plane of mass 1kg each.The coefficient of static as well as kinetic friction is $0.6$ and angle of inclination is $30^\circ$ . Find the acceleration of the system. (string and pulley are ideal). Take $g=10m/s^2$. 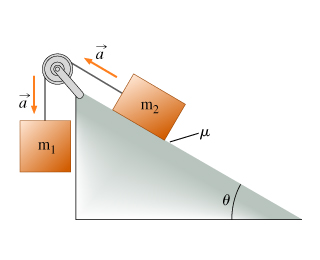 I attended the question like any other block-inclined plane problem assuming block $m_2$ to be moving down and got the answer to be $-5.1m/s^2$. But, the answer says if you take the other block to be moving down then you get an acceleration of $-0.1 m/s^2$. Since there are two negative values for acceleration we can conclude that the acceleration is zero. It doesn't make any sense to me. Please explain this. The answer is given in such a way that the static friction has no role. Why is it so?

First thing is, Friction prevents relative motion. What this means is, that the value and the direction of friction will so adjust, that it will try to minimize relative motion between the surface and the block and to prevent it, if possible.
Next, static friction is an self-adjusting force. What this means is that, its magnitude and value is not fixed but it will change depending on the different physical situations, i.e. different forces acting on the body. It's maximum value in this case will be $\mu_s N$ but it can have any value from zero to this maximum. The value depends upon the situation and is always such that it avoids relative motion. (having the maximum value is the best try friction can do to prevent relative motion, and beyond that, if the external force is increased, relative motion occurs and the value of static friction is substituted by kinetic friction.)

In your problem, you should first try and check if a stationary (zero acceleration) solution is possible, i.e. will friction be able to prevent relative motion (between the inclined plane and the block 2). To do this, draw a free body diagram of block $M_2$. It has $T$ tension acting upwards (along the incline of the plane) and $M_2g\sin\theta$ acting downwards (along the incline). Let us suppose a static solution is possible, i.e. friction is able to prevent all motions.

Then, both the blocks must be stationary. This means that the tension $T=M_1g$ since, on block 1 there is only the downward gravitational force which needs to be balanced by the upward tension if it has to stay stationary.

Going back to block 2, the forces along the incline are $M_1g=10N$ upwards and $M_2g\sin\theta=5N$ downwards and the friction. Since the upwards (along the incline) force is greater than that downwards, the friction must act in a downward direction to keep the block in equilibrium. The magnitude of friction needs to be $5N$ which is less than the maximum value of friction possible $\mu_sN=0.6M_2g\cos30=5.196N$, and hence the static solution is possible. Here, the frictional force will be $5N$ and not $5.196N$ as static friction self-adjusts to the value required to maintain a stationary state, i.e. prevent relative motion.

We can write the equations of motions as(assuming $a$ as stated in the figure) as:

where f is the frictional force directed downwards along the incline.

Solving this for $a$ we get,

So using the given extreme values for f,we get that at one extreme the block moves up and at the other it moves down,so there must be a value of $f$ for which $a=0$ since the graph of acceleration vs $f$ is s straight line.

Put simply,the extreme values of $a$ imply that the line of $a$ vs $f$ has an x-intercept which in turn will imply that friction will self adjust to give a zero acceleration.(That is exactly what the frictional force wants-no relative motion.)

Let us assume that the bodies are not at all mlving then the tension in thread due to mass m1 is 10 N and force of gravitation on mass m2 along incline is 5 N but maximum friction is 5.2 N so the block s would not move at all. This is what we accept for a stationary system.
Hence our assumption is correct and the blocks do not move.

Thanks sandesh for making me remember that friction can be variable.

Addendum : please notice that "maths" is not failing to give appropriate results, we have failed to account for the variable magnitude of frictional force, when we assume the friction to be in maximum value(limiting friction) we get negative results from both side, since we did a mistake while putting the value of friction as limiting friction in our equations.

16
Block on a block problem, with friction
1
Preventing a block from sliding on a plane (with friction)
3
Block Sliding Down a Plane (Perpendicular Velocity)
0
Measuring friction coefficient with a inclined plane. Beetle problem
1
Inclined Plane and Center of Mass
2
Work done by friction on an inclined plane