Are Newton's gravity waves detectable by a laser interferometer?

Newton's theory of gravity supports "gravity waves" in that moving objects cause changing gravitational fields. For example, two bodies rotating around their center of mass will have a stronger gravitational field when they are longitudinally oriented than when they are transverse oriented. Given two masses of mass $M$ orbiting on a circle of radius $r$, at a distance $d$ from an observer, the strength of the attraction is: $$\begin{matrix} F_{min} &=& \frac{2GM}{d^2},\\ F_{max} &=& \frac{2GM}{d^2}\frac{1+r^2/d^2}{(1-r^2/d^2)^2} \end{matrix}$$ 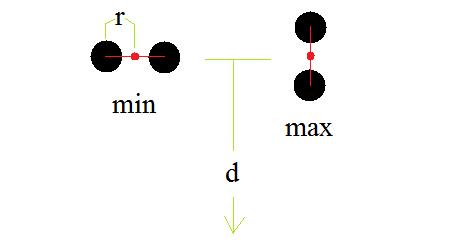 This should be detectable at long distance.

My question is this: With that sort of gravity, would the laser interferometer based gravity wave detectors be able to detect the gravity wave? An example is the LIGO, Laster Interferometer Gravitational-wave Observatory.

This is exactly the approach taken in Bernard Shutz's note "Gravitational waves on the back of an envelope" (Am. J. Phys. 50 vol 5 pp 412). The abstract reads:

Using only Newtonian gravity and a little special relativity we calculate most of the important effects of gravitational radiation, with results very close to the predictions of full general relativity theory. Used with care, this approach gives helpful back‐of‐the‐envelope derivations of important equations and estimates, and it can help to teach gravitational wave phenomena to undergraduates and others not expert in general relativity. We use it to derive the following: the quadrupole approximation for the amplitude h of gravitational waves; a simple upper bound on h in terms of the Newtonian gravitational field of the source; the energy flux in the waves, the luminosity of the source (called the ‘‘quadrupole formula’’), and the radiation reaction in the source; order‐of‐magnitude estimates for radiation from supernovae and binary star systems; and the rate of change of the orbital period of the binary pulsar system. Where our simple results differ from those of general relativity we quote the relativistic ones as well. We finish with a derivation of the principles of detecting gravitational waves, and we discuss the principal types of detectors under construction and the major limitations on their sensitivity.

(If you don't have access to Am J Phys, this talk seems to recapitulate the details.)

A major difference in this Newtonian scalar theory from the real GR theory of gravitational waves is in the effect of the waves on an inertial test particle. This Newtonian theory predicts that the waves would appear as an oscillating force along the direction between the source and the test particle. By contrast, GR predicts an oscillating differential tidal effect in the plane perpendicular to the line connecting the source and the test mass.

As a result, while I think LIGO would still detect the "Newtonian" form of gravitational waves, the antenna pattern of the detector would be different. The L-shaped LIGO detector has optimal sensitivity to a source located directly overhead in the GR case (allowing the gravitational wave to stretch one arm while it is compressing the other). There would be no sensitivity to a "Newtonian" source directly overhead. However, you could detect it if the "Newtonian" source were aligned with either arm.

By the way, "Newtonian noise" (the near-field action of Newtonian gravity arising from density waves in the material near the detector) is a real concern for terrestrial gravitational wave detectors!

If we assume that the effects of gravity propagate at light speed, then in order for one mirror to experience $F_{max}$ while the other experiences $F_{min}$, the objects must rotate 90 degrees in the time $l/c$ where $l$ is the path length of the interferometer (4 kilometers for LIGO).

If we choose the speed of light as an upper bound for the speed of the rotating objects, this means that they can be separated by no more than about 5 kilometers ($r=2.5$).

A lower bound on $d$ can be 4 lightyears, the distance to the nearest star.

Let's suppose the mass of a mirror is $m = 100 kg$, and the mass of the rotating objects is 20 billion solar masses, the largest known mass in the universe.

Punching this into google calculator gives a force difference of about $10^{-28}$N, which is 4 orders of magnitude smaller than any force yet measured - and of course most of these assumptions are unphysically generous.

This does not imply gravity waves. This can be seen by the following calculation. The mass configuration is that of two masses in a circular orbit around each other. This is a dipole term, which defines ${\vec p}~=~m{\vec d}$, for $\vec d$ the distance between the two masses. So this dipole moment projected along the field determines a dipole potential $$ \phi_d(r)~=~{\vec p}\cdot\nabla\frac{GMm}{r} $$ If this generates power in waves that escape the system, then a time derivative is dependent on $md{\vec d}/dt$. However, momentum conservation tells us this must be zero in the initial frame of the two masses.

So in order for gravity waves to exist one must have quadrupole moments and higher. However, this contributes to gravity waves in the post Newtonian expansion to second order. The

I will try to amplify the effect based in angles to an ensemble of distant stars. I assume that the observer has a large mass or a sensitive device (the all planet where he inhabits or a Near Large Star, and all the other parameters are known. In the figure any change in position of the observer or the 'Device Star' in a periodic movement will be theoretically amplified in the measure of the angles a and b. 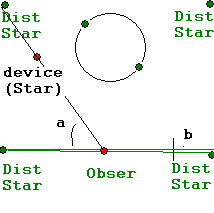 I am measuring the gravitational influence but I do not think you are measuring 'gravity waves'. The problem with LIGO is that the device is subject to dynamic changes in length, and the laser light undergoes the same changes, making impossible the detection of any variation. After all LIGO is measuring 0.

Not the answer you're looking for? Browse other questions tagged gravity newtonian-gravity interferometry or ask your own question.

4
Has somebody ever tried to measure the gravity oscillations of nearby rotating masses?

0
Difference in gratitational field due to lunar apogee/perigee
1
Significance of gravitational attraction between individual particles at light-year scales?
4
Is there an approximate expression for the force between two black holes?