How can a block which is not receiving the direct force have a greater acceleration? 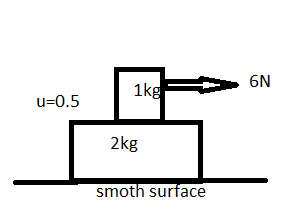 For the top block,

For the lower block, the driving force will be the frictional force, so

I am confused as to how the lower block could have acceleration greater than the upper block, since the force is acting on the top block.

Your calculations are wrong.

The basic assumption that friction = u x N u = coefficient of friction N = Normal force (in this case the weight of the block) Above assumption is valid only if there is relative motion between the two blocks i.e a case of sliding motion, but before we consider that sliding occurs we should verify whether the block are moving relative to each other of not i.e. checking for static friction.

Now the maximum value static friction can reach is uN i.e. Sliding/kinetic friction but can also be lesser than that. Taking that into account and assuming friction to be f (a variable) and no relative motion between the blocks. No relative motion means that both blocks will have same acceleration.

both blocks having same acceleration, hence no relative motion.

You have got the right answers, just are interpreting it a little bit wrong;

I apologise for misunderstanding and posting the wrong answer earlier

This the result of not keeping track of what your calculation or measurement is relative to. The small block is not accelerating very much relative to the large block, this is correct:

The large block is accelerating much relative to the surface, this is correct:

But how is the small block moving relative to the surface? It is accelerating much faster than the large block:

This is the acceleration of the small block you are missing out on.

18
Block on a block problem, with friction

2
Is the newton's second law for a body experiencing a frictional force, relative to the surface in contact?
1
Understanding role of friction in block on block problems
0
Friction, Dynamics question
2
Why is $mg$ positive and $N$ negative in this problem?
2
Why doesn't the top block's mass affect the acceleration of the bottom block when they're stacked?
2
Two stacked blocks with the upper block pulled with force $F$
0
Can Acceleration of The lower block Be ever greater than Upper block?
2
Dependence (or lack thereof) of forces on frames of reference