Can the connectivity of space change in string theory?

There is a very interesting way in which the process of pinching off a spacetime (or geometry) to create two disconnected regions. This picture is due to Mark Van Raamsdonk which is outlines in the essay Building up spacetime with quantum entanglement. Incidentally this paper was also the winner of the 2010 Gravity Research Foundation essay contest.

The picture itself is fairly straightforward if you have some familiarity with the basic notions of the duality between (super)gravity on an (asymptotically) Anti-DeSitter (AdS) spacetime and a CFT (conformal field theory) on living on the boundary of this spacetime. However, I just read the paper a day or two ago so please excuse any stupid mistakes in my explanation.

Raamsdonk's reasoning builds upon a result according to which given a CFT on a boundary $\partial M$ of a spacetime $M$, the entanglement entropy between the degrees of freedom of a subset ($A$ in the figure below taken from Raamsdonk's paper) of $\partial M$ is given by the area of the static minimal surface ($\tilde A$ in figure) in the bulk AdS geometry whose boundary is given by $\partial A$. 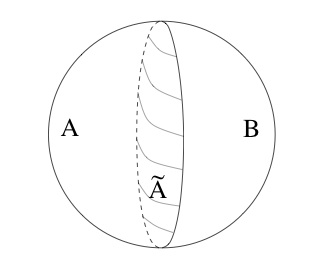 Now consider the situation when, as shown in the figure above, the boundary $\partial A$ of the minimal surface $\tilde A$ divides the boundary of the bulk spacetime into two regions $A$ and $B$. Then the argument goes as follows - the area of $\tilde A$ is a measure of the entanglement entropy between the degrees of freedom in $A$ and in $B$. Shrinking the minimal surface $\tilde A$ will then have the effect of reducing the amount of entanglement between the d.o.f. in these two regions. The physical effect of decreasing the area of $\tilde A$ in the bulk geometry is to "pinch off" the two regions of the AdS spacetime separated by this minimal surface, until eventually we are left with two disconnected copies of AdS spacetime, each of whose respective boundary CFT's are no longer entangled with each other. This is illustrated in the following figure also taken from Raamsdonk's paper. 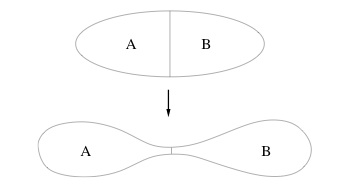 The arguments as presented here are necessarily lacking in details for lack of space and time. For these I suggest reading Raamsdonk's GRF essay winning paper linked to above and the Ryu-Takayanagi PRL which shows the relation between minimal surfaces in AdS and entanglement entropy of the CFT on the boundary of the AdS spacetime.

[Nb: Since the AdS/CFT duality is usually understood as having a string-theoretic basis, the above answer satisfies the OP's requirement that string theory be made use of in explaining the connectivity of spacetime.]

[Edit: For more on the relation between the geometry of AdS and entanglement in spin-systems, see @genneth's very interesting answer to the question What's so special about AdS? where he talks about the so-called Multi-scale Entanglement Renormalisation Ansatz (MERA) and its relationship to AdS geometry]

Not the answer you're looking for? Browse other questions tagged string-theory or ask your own question.

20
What's so special about AdS?
16
The Reeh-Schlieder theorem and quantum geometry