I know about spherical, aspherical, cylindrical lenses, but are there lenses that could have a curved focal plane? for example, the retina of the eye is curved, and still we see sharp images of distant objects.

In a recent problem I studied, I wanted to have a lens that would transform a flat object (a book cover, for example) into a curved image. That is, each point of my book cover would be imaged correctly (i.e. the image would be sharp enough) by my lens - only, on a curved screen, like a spherical screen for example.

Would there be a specific form of lens that could do exactly this, the same way that aspheric lenses do "perfect" images of distant objects on flat screens, better than any spherical lens?

I am asking this because, in my application, the screen will need to be strongly curved, and I still want the best possible stigmatism in these conditions, without reducing the aperture too much...

Well ALL lenses have curved focal surfaces; there are NONE that have perfectly flat sharp focal planes over any finite angular field of view.

It is however theoretically possible to design a lens with a flat focal surface, but only for imaging one specific object plane onto one specific image plane.

The problem is a factor called the "Petzval curvature." which is a curved surface on which the image will be formed IF it is free from Astigmatism. Ordinary, uncorrected Astigmatism, will make the image field even more curved, than the Petzval surface. It is a common trick to deliberately incorporate a certain amount of overcorrected astigmatism, in order to produce a flatter best image plane; but the images will be somewhat fuzzy.

The Petzval curvature (sum) is dependent ONLY on the curvatures of the surfaces, and the refractive index of the media. It is unaffected by thicknesses or the order of the surfaces.

You definitely can design your lens for more-or-less symmetrical field curvature you need, although I never did that. I've seen a design which was optimized for imaging on almost half-cylindrical focal plane. I have no links on how one should design such systems.

Designing such lens for such non-linear surface is probably quite complicated. This might require using exotics like freeform or computational holography elements i.e. quite expensive to design / manufacture.

To add to George Smith's and Barsmonster's answers, I thought I'd add some actual results for a lens system I designed a long time ago for interest's sake. I have drawn it below: a cross section of the output of my system. 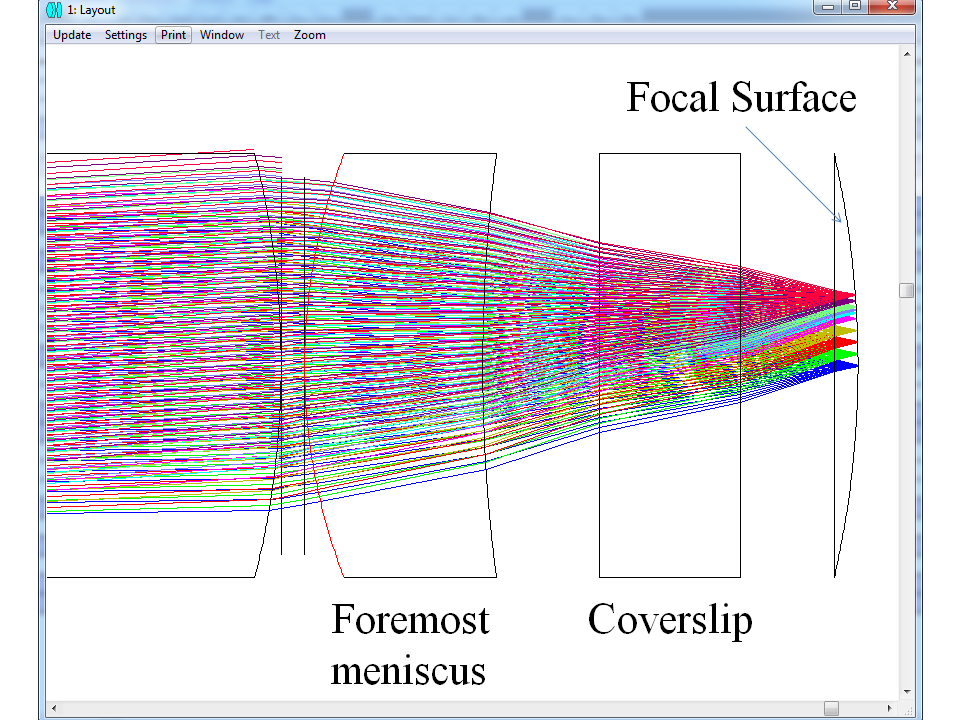 This system's diameter is 1.8mm, the field of view 0.6mm and the radius of curvature for the focal surface is 4mm. The way that the focal surface bends so that the focal point tends to trace a spherical surface centred on the lens system's foremost (rightmost in my drawing) principal point see Wikipedia page for "Cardinal Points (Optics)" is the system's wonted behaviour and it is quite hard to design so that this "usual" curvature is not present. The 4mm curvature is pretty low and I had to do quite a few tricks to get it low. For the particular system I was designing, a more typical radius was 1.6mm for a system with the aberration performance I needed.

Camera lenses have quite sophisticated optical lens groups whose only function is to flatten the field of view so that images don't get out of focus over the CCD array (or photographic film, in 20th century technology!). Likewise for most brighfield microscopes: we need the focal surface to be near to coincident with the imaging surface on the slide. A microscope objective with field flattenning is often called a "Plan achromat" or "Plan apochromat" (the word "plan" being the key one here). As in George Smith's answer, there are various tricks to lower the field curvature. Another common one (aside from the astigmatism overcorrection mentioned by George) is the use of Gallilean telescopes that shrink a collimated beam at a Fourier plane, then unshrink it again. The Petzval curvature introduced by such a sequence offsets the commoner curvatures.

MrBrody. Do you know the Newton formula for thin lenses. if (x) is the OBJECT distance in front of the front focal point, and (y) is the IMAGE distance beyond the back focal point, then: x.y = f^2 For x = y, we must have x = y = f so the minimum object to image distance is 4f at 1:1 magnification (actually -1:1) .

Now consider a slightly off axis point on our object plane. Is it not slightly greater than distance x from f1 ? Of course it is. So then the corresponding image point, must be at a distance LESS THAN y from f2 , so it cannot be on a plane through y, it must be on an inward curve. Now imagine if we had it set at 1:1 with 4f between object and image. Well I can put a second identical lens, 2f from my first image through y, and re-image that 4f distant at say z.

Well my inward curving image through y, now becomes a BACKWARD curved object, for the second lens, so it will form an even more curved second image. String enough of them together, and the image will curl up like a pretzel.

So yes; Petzval curvature is a sinister thing if you don't want any.

Here's a simple lens situation for you to look at MrBrody. Let's make a convex-plano lens out of glass with an index of 1.5. Make it 1cm diameter (not critical) and the convex first surface (on the left) has a radius (R) = 5 cm, and it is a very thin lens. It iseasy to show that such a lens has a focal length given by:

So the Petzval surface has a radius of 15 cm, and is curved in to the left towards the lens. Well we won't worry about any other aberrations like astigmatism.

Now suppose we made a concave-plano (negative ) lens with the concave surface being -5cm and using our 1.5 index glass. Well this lens will have a focal length of -10 cm, and it will have a Petzval curvature of -0.0667, so a -15 cm Petzval radius. Now it too, is a thin lens.

So now I take my negative lens, and I place it at the focus of the first lens, 10 cm to the right of the first lens. Well we'll put it just short of the 10cm, so the marginal rays can pass right through the negative lens, just before they reach the focal point on the axis. Remember these are both very thin lenses. Well the rays had almost focused before they got to the negative lens, and it will try to defocus them a little bit, but the middle of the lens is nearly flat so the negative lens doesn't do much, but it does slightly increase the focal length of the combination.
In the limit of really thin lenses, the second lens does almost nothing and the total focal length remains about 10 cm.

BUT !! A miracle has happened. The second lens has completely cancelled the Petzval curvature of the first lens, while leaving virtually all of its optical focusing power intact. This is often called a "field flattener" lens, and is a very common approach to fixing up field curvature problems.

Now you could also do the reverse. If instead of putting our -10 cm negative lens at the focal plane, what if I put a second +10 cm positive lens there ??

Once again, the lens placed right at the image plane will not change the optical power significantly; but I just doubled my Petzval sum, and halved the radius of curvature of the system Petzval surface. Now these simple lenses wouldn't be much good in a real situation, specially with chromatic and other aberrations, but you can see how the focal surface curvature can be manipulated.

I'll let you draw the pictures for yourself, and play with it to see what happens.

If you look at the CERN monster accelerator, you will find, that all around that huge ring, there are magnetic focusing lenses, interspersed with magnetic defocussing lenses, exactly the same as I just described. Now Accelerator designers call this "Strong focusing"; they probably have never ever heard of the Petzval sum, or the Petzval curvature, but that is exactly what they are doing, to keep those particle beams confined to their track, without curling up into a pretzel. The same optical scheme is used to pipe an image a long way, such as in an old time optical periscope.

Not the answer you're looking for? Browse other questions tagged lenses imaging or ask your own question.

47
Do people wearing glasses have different field of view than those who don't?
1
How do I experimentally find an image projected by a lens?
4
Why do we see a blurred image when the screen is not placed at the position where the image is formed by a convex lens?
1
How to think about virtual images?
0
Why does the focusing efficiency drop with numerical aperture for a microscope objective?
2
Can an image formed by gravitational lensing be corrected for the inevitable aberration?