Why the center of our galaxy doesn't absorb us?

Depending on the theories, the center of our galaxy is a super massive black hole, this is easy to accept as a truth, but what I couldn't simply devour is how the solar system is orbiting around it while not getting absorbed to the inside ? It's simple to understand how earth orbits the sun, but the black hole is something more energetic and at most pulls everything to it's center. By looking to this image for example: 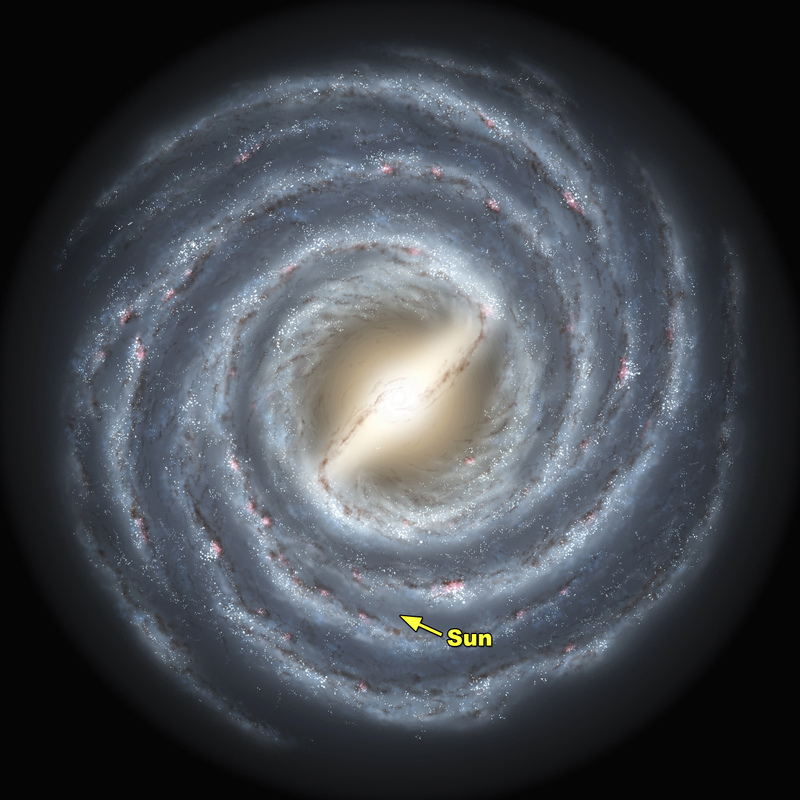 If we follow the bright lines it looks like everything is really going to the true center like a vortex. If you have any simple ways to enlighten me or any references to read I will be thankful, because sometimes I don't know what topic should I search for to find answers without posting questions like this one.

And also, would our galaxy run out of stars since the black hole devours them fast while they take too long to reproduce ?

The spiral arms don't mean that the mass is getting sucked to the center. They're just wave-like density patterns.

The bodies in orbit around the center of the galaxy are in stable orbit; just like the Earth around the Sun and the Moon around the Earth. What happens is that gravity accounts for the centripetal force (in the orbiting frame, gravity is balanced by the centrifugal force), so there is no net radial acceleration "left over" to suck the body in.

The only reason things would fall into the center is if they were headed there. This can happen if two stars pass by each other and are slingshotted in opposite directions, one of which gets sent to the center of the galaxy.

To the original poster: You appear to be operating under the "hollywood" misconception that a black hole somehow "sucks harder" than the same amount of mass in a non-black-hole form. However, this false "black holes produce an enormous sucking" misconception is one of the many, many concepts of physics that "hollywood" gets totally wrong; a black hole of a given mass produces exactly as strong a gravity field as an object made of "normal matter" having the same mass. If, for example, the Sun were somehow instantaneously replaced with a 1 solar-mass black hole, the orbits of all the planets in the solar system would remain unchanged in the slightest, and the only way anyone would know anything had happened would be that "the Sun suddenly went dark."

Nor despite superficial appearances is the galaxy a "bathtub vortex" draining down the central supermassive black hole; as other posters have noted, the spiral arms are not "streams of matter," but rather concentrations of bright, hot, short-lived stars that form in the wake of "density waves" propagating through the gas and dust of the galactic disk.

The super massive black hole is creating a force acting on the material in the galaxy, but that material still has angular momentum which needs to be conserved. In a similar way, the earth is in orbit around the sun and it is bound in its orbit by the gravitational potential from the sun's mass. If you were to naively calculate the force on the earth as $F= G m_\text{earth}M_\text{sun}/r^2$ you would conclude that the force would pull the earth in, however you would have neglected the angular momentum of the earth, for it to fall in it would need to lose its angular momentum (L) . Since $L=m_\text{earth} v\times d $, where d is the distance to the sun, this means the earth would need to decrease its orbital velocity to decrease L.

Just remember that a Black Hole doesn't have infinite gravity - it just has however much mass created it in the first place. Yes, anything that gets within the event horizon is trapped forever, but that event horizon will actually be smaller than the size of the equivalent amount of mass composed of ordinary matter. This is also why "microscopic black holes" created at, say, CERN, could never suck the planet in - they're simply too small. If we could create a planet-sucking black hole in a lab, we'd already have to know how to violate Thermodynamics and create mass.

I'm not going to present a complex mathematical argument, nor investigate the abstruse corners of the Standard Model of physics that would require a University-level qualification to comprehend.

I merely wish to make a straightforward logical point, that no one ever seems to consider.

If the Galaxy was in some manner unstable (this question imagines that all the stars in it are swirling down an imaginary cosmic plughole, like a bathtub of water with the plug pulled out), why would the Galaxy still exist after such a vast length of time?

I suggest that the reason why the Galaxy is still here, after all these thousands of millions of years, is a proof that the Galaxy is stable. Enough time has elapsed for the theorised disaster to occur, and the Sun to be destroyed by falling into the central black hole, but this has not in practice happened.

I suggest this proves that the Sun is in a stable orbit about the galactic centre of mass, such that the radius of the Sun's orbit is not significantly changed in all these eons, and that the length of time the galaxy has existed proves that it exists in a state of equilibrium, in which its stars are in stable orbits.

Black holes pull matter in thus creating a pulling of matter or rotation (gravity) force that matter rotates or spirals around thus creating our shape form and rotational direction of our galaxy. If our sun doesn't die first then yes one day we will be pulled to the center of our galaxy. Every galactic year our solar system speeds up and grows closer to the center. The reason earth doesn't collide with our sun is were all traveling at a galactic velocity constant! Which is in proportion to our galactic center ( black hole) pulling or swallowing matter, gas, and Solar systems down, a gravitional galactic constant.

Not the answer you're looking for? Browse other questions tagged black-holes angular-momentum orbital-motion galaxies celestial-mechanics or ask your own question.