How does Infrared Relate to heat?

I never understood the relationship between Infrared and Heat. Is IR emitted when heat is generated, is heat generated when IR is made, and how do the two relate?

The energy of electromagnetic radiation (particularly a photon) is

where $h$ is Planck's constant, $\nu$ is the frequency, $c$ is the speed of light, and $\lambda$ is the wavelength. So you can see that as wavelength increases, the energy goes down.

Different wavelengths of electromagnetic radiation correspond with different energies of quantum states. Photons can be absorbed by a molecule to gain energy, but only of specific wavelengths (depending upon the molecule and the two states being transitioned to/from).

Note that vibrational states are only really accessible at higher (near room temp generally) temperatures.

All matter in bulk radiates (approximately) as a black body radiator, approximately because there are coefficients of emissivity depending on the constituents. For gases the functional form is different. 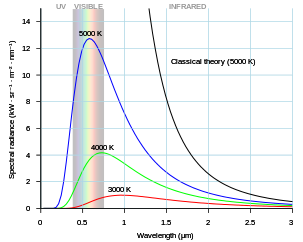 Note that most of the radiation is in the infrared.

Thus the energy carried away by the infrared radiation reduces the heat content of the radiating body. This is the connection of infrared to heat.

The microscopic interactions that give rise to the photons are explained in the other answers. This answer concerns the thermodynamic framework

I think I understand your confusion. The answer would be: You've been misguided. There is no special link between heat and infrared radiation, except for the fact that most bodies radiate most of their heat in the infrared spectrum because they don't have enough energy (heat) to radiate at a higher frequency. See the graphs in this thread.

So one could claim the same connection between X-rays and heat. In fact, it would be even more so, since interactions with X-rays are even higher energy, except that there aren't that many things radiating x-rays around. Probably.

The easiest answer is that below 3,000 Kelvin in temperature, heat radiates EM (often referred to as light by physicists although it is all EM not just visible light) in the infrared. Because most heat generates light in the infrared, scientists often refer to infrared light as heat. This is a generalized term or a convention.

I take it, that is your question.

"Infra-red" is electro-magnetic radiant energy generally encompassing the range of wavelengths from about 800 nm (near IR) to about 100 micro-meters (far IR). Infra-red radiation includes emissions from single molecules or atoms, as a consequence of quantum mechanical transitions between energy states of those atoms or molecules. It also includes emission of a continuum spectrum of EM radiant energy from large assemblages of atoms or molecules that have a Temperature higher than zero kelvins; that radiation being entirely due to, and characterized by the Temperature of the material, and unrelated to any quantized energy levels that are characteristic of the emitting material. The origin of the radiation is the acceleration of electric charge in the atoms or molecules of the material, while they undergo distortion as a result of being in collisions with each other; those collisions being characteristic of the Temperature of the material.

"Heat energy" on the other hand, is purely mechanical energy of translation or vibration, rotation etc, of the atoms or molecules themselves, and is unrelated to electric charge or properties of electros or atomic states. Heat energy can be transported through physical materials, as a consequence of the collisions between atoms or molecules and their neighbors. (conduction) It can also be transported, by physical bulk transport of the (heated) medium itself (convection).

"Heat energy" is NOT electromagnetic radiation.

IR radiation is a consequence of the thermal energy of a system, and it is in this form that the energy propagates. Ofcourse, there are various regions in the electromagnetic spectrum and just about any one of them can carry energy (in simple terms). Doubtlessly, you must have heard of the microwave, which uses the radiation in the microwave spectrum to heat food. So, the relation between infrared and heat is that they can be said to be generated from each other.

Not the answer you're looking for? Browse other questions tagged thermodynamics infrared-radiation or ask your own question.

2
How does a radiometric infrared camera estimate an objects temperature?
0
How deep can IR photons penetrate?
0
Infrared light and heat
0
Where can I find data of a UV blocking glass absorption filter absorbing the visible light and re-emitting the energy as a photon of NIR?
0
Why do longer wavelength have such effect on heat transmission?

1
What would give us more heat ? infrared or microwaves?
8
Why does glass absorb infrared light?
4
Do infrared lamps provide more heat than incandescent lamps?
2
How does a radiometric infrared camera estimate an objects temperature?
0
Infrared light and heat
7
Why is infrared radiation associated with heat?
1
How does entropy exactly relate to the heat flow of a system
31
Why are only infrared rays classified as "heat rays"?