Do electric and magnetic lines of force physically exist? [closed]

As per my imagination any thing can't impose force on the other by not giving even a touch(i,e action at a distance). So I thought there must be some physical existence of lines of force. Although virtual particles hypothesis has been proposed. Up to my knowledge virtual particles are just said to be disturbance (field) and not the one what we thought as materialistic "particle". Anyway I have heard about Faraday speaking about such similar view about there physical existence. But I do have a naive idea about it. I would greatly appreciate if any one can input something about your view on the physical existence of force lines. It would be more appreciable if any one can speak about Faraday's and Maxwell's approach on this concept. 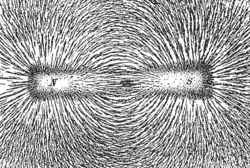 I am providing Faraday's and Maxwell's basic views about the concept, so that anyone can speak about it.

FARADAY'S VIEWS: At first Faraday considered the physical reality of the lines of force as a possibility, yet several scholars agree that for Faraday their physical reality became a conviction. One scholar dates this change in the year 1838. Another scholar dates this final strengthening of his belief in 1852. Faraday experimentally studied lines of magnetic force and lines of electrostatic force, showing them not to fit action at a distance models. In 1852 Faraday wrote the paper "On the Physical Character of the Lines of Magnetic Force" which examined gravity, radiation, and electricity, and their possible relationships with the transmission medium, transmission propagation, and the receiving entity.

MAXWELL'S VIEW: Initially, Maxwell took an agnostic approach in his mathematization of Faraday's theories. This is seen in Maxwell's 1855 and 1856 papers: "On Faraday's Lines of Force" and "On Faraday's Electrotontic State". In the 1864 paper "A Dynamical Theory of the Electromagnetic Field" Maxwell gives scientific priority of the electromagnetic theory of light to Faraday and his 1846 paper "Thoughts on Ray Vibrations". Maxwell wrote: Faraday discovered that when a plane polarized ray traverses a transparent diamagnetic medium in the direction of the lines of magnetic force produced by magnets or currents in the neighborhood, the plane of polarization is caused to rotate. The conception of the propagation of transverse magnetic disturbances to the exclusion of normal ones is distinctly set forth by Professor Faraday in his "Thoughts on Ray Vibrations." The electromagnetic theory of light, as proposed by him, is the same in substance as that which I have begun to develop in this paper, except that in 1846 there were no data to calculate the velocity of propagation.

I hope anyone from quantum physics can speak about virtual particles.
Here is a opinion of Matt Strassler (click on this) about Virtual particles hypothesis

The electric and magnetic fields are real things: they can store energy and transfer momentum.

"Field lines" or "lines of force" are a visualization tool suitable for drawing vector fields. They are maps of the fields and the fields are real things. Is that good enough for you?

And, yes, the electromagnetic interaction can be described in another (more fundamental) way as exchange of bosons in a quantum field theory. But that does not change the fact they these fields store energy and transfer momentum.

Does the fact that every rain drop falls in their respective straight lines all parallel to one another imply that those lines are physically real?

No. It is just the tendency of gravity to act between two massive objects--a straight line is simply the least inaccurate way to describe this interaction. You can also draw additional curved lines linking the sides and tops of the drop to the earth, but these cancel out because of symmetry.

If you were to observe the rain drops on an enormous scale--large enough to have to account for the curvature of the earth, you would then realise the lines are indeed not parallel, but converge to the earth's core. While this is another story, it helps to illustrate that gravitational field lines link two massive objects together and a billion water droplets are well described with a billion straight field lines connected to the earth.

The difference for magnetic field lines is that they are not formed between two independent magnetic monopoles (not yet confirmed to exist), but by one magnetic dipole. In this way magnetic field lines do not originate or terminate between two independent objects, but forms a closed loop with itself. By this logic the lines will never be straight but always curved--if they look straight it is only due to extreme magnification, such as looking at rain and thinking they all fall parallel when they are actually converging to one point. You may also get the impression that field lines are straight by dropping filings between the gaps of two magnets--they form a straight line of filings, but are in fact only highlighting a small portion of a large closed loop.

When you look at iron filings they do not show you field lines existed before the filings arrived, lines which must be obeyed, rather they draw field lines which exist now both because of the electrons in the magnet and because of the filings themselves which alter the closed field. So when you shake everything up...you will not get the exact same pattern, but you will still be able to see traces of closed loops.

Field lines are created and located by people to demark measurable points in field strength according to some selected unit of measure, and also to show the direction/polarity of the magnetic field. Polarity exists, differences in field strength exist, field lines do not exist other than as a mental construct. The analogy to drops of rain describing non-paralel lines towars the center of the attractive body is a good one, as there are in that case no actual lines at play, just as magnetic field lines are also not at play, or at work, in any phsical sense whatsoever. The fact that they are useful in treating magnetic fields mathematically should not lead to their reification.

No, they don't exist physically (in macroscale). Magnetic field is changing gradually from point in space to another point in space (if you go subatomic, then I guess at some point it will be changing in Planck quanta, so I guess at that really small scale you could say that field lines do physically exist :)).

Not the answer you're looking for? Browse other questions tagged quantum-mechanics electromagnetism forces electricity electrostatics or ask your own question.

8
Is the concept of a field necessary to electrodynamics?
1
Understanding field representation of force
0
Doubts on Electric/magnetic field lines
1
Why isn't the electric field just a mathematical tool?

7
Why does Einstein say contradictions arise from treating the EM field as lines of force?
2
Difference between action-at-a-distance and a field according to Maxwell?
6
How are the Lorentz force, Maxwell's third law and Faraday's law of induction clasically related?
1
Can you depict the electron's electromagnetic field?
3
Why doesn't Faraday's Law include speed of EM wave
1
Misunderstanding about current created by electromagnetic induction and magnetic field
5
Demystifying the connection between magnetic and electric fields
2
Maxwell-Faraday's Law of Induction Violated?