Can I make a rod in the vertical plane move with its one end on the ground in a slanting position?

Consider a rod kept vertically on the ground. I keeps the rod in a slanting position making some angle with the horizontal. Can I now move this rod along the horizontal plane by applying a force at its bottom? The torque due to my force at the bottom will act against that due to gravity keeping the rod at equilibrium in that slanting position and I could move it.

I tried it experimentally using one of my books instead of rod and it kind of worked.

But, when I thought about the situation in different ways I get opposite answers. Consider the rod at rest at that slanting position. If I leave it it will fall by rotating about the point of contact. When I'm moving the rod I'm applying force on the bottom point. As my force passes through the axis of rotation torque due to it would be zero and I cannot move it the way I want.

Another way of my thinking-my force at the bottom of the rod would actually provide a torque along the center of mass of the rod which will act against the torque due to gravity and in this way my experiment would work the way I thought.

Why am I getting different results if I think in different ways? Please help.

The situation in your question is not clear. Without a sketch, all I can offer is the following. The governing equations of a sliding, slanted rod driven by a force $F$ at the bottom are: 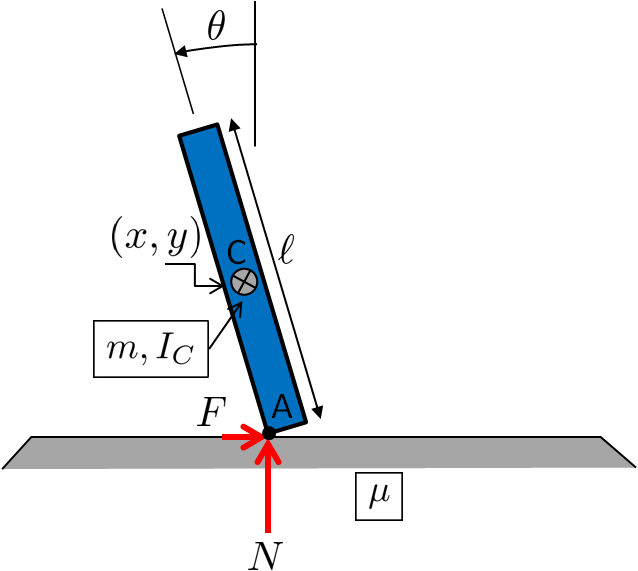 It's not clear what you are really asking, but this sounds a lot like the stick balancing problem used to keep undergrads busy in control systems classes. You can make the rod eventually go to any position you want by moving the bottom point appropriately. The Segway personal transport product is a great example of this principle being used in the real world.

Suppose that the rod accelerates to the left at rate $a$ while also tilted to the left of vertical by angle $\theta$, as in ja72's diagram.

In the accelerating reference frame that is moving with the rod, there is an anti-clockwise torque about point A due to gravity of $mg\frac{l}{2}\sin\theta$. This is balanced by a clockwise torque $ma\frac{l}{2}\cos\theta$ due to the fictitious force $-ma$ acting to the right through the CM of the rod. The rod can remain balanced at a fixed angle $\theta$ if these two torques are equal, ie if
$$a=g\tan\theta$$

The fictitious force $-ma$ is equal in magnitude and opposite in direction to the force $F$ which you apply towards the left at end A. In the accelerating frame of reference the rod is statically balanced horizontally by these two forces : $F-ma=0$. It is also balanced vertically by the gravity force $mg$ and the equal and opposite normal reaction $N$ from the ground : $N-mg=0$.

If there is no applied force $F$ (your 1st scenario when you leave the rod at rest) then there is no acceleration $a$. Consequently in the frame in which the rod is instantaneously at rest there is no fictitious force $ma$ acting to the right and no counter-torque to balance the torque due to gravity. There is nothing to stop the rod from toppling to the left.

In your 2nd scenario your applied force $F=ma$ accelerates the rod. In the accelerating frame of reference which is moving along with the rod, you have to take account of a fictitious force $-ma$ acting at the CM of the rod. This is similar to the centrifugal force in rotating reference frames.

Both of these torques indicate that the book of your will fall (I hope you are getting same results in your experiment). Moreover if you try seeing from some other point, you would have to consider pseudo forces these in turn will give you the same answer.

Not the answer you're looking for? Browse other questions tagged newtonian-mechanics newtonian-gravity rotational-dynamics or ask your own question.

3
Push a box in a plane with friction. How to deal with the rotation?
2
How's equilibrium possible here?
1
how the force acts only along the length of the rod
5
Force required to move bar at one end
2
Calculating acceleration of end point of rod
1
Simple question about rotation in a uniform rod pinned on axis in center