The Boltzmann equation in absence of external force reads:

Where the r.h.s. stands for the change in the distribution function of the velocities owing to collisions. I won't specify here a particular collision kernel as it is not necessary for my question...I think.

It is common to introduce

It is then easy to integrate over the velocities the force-free Boltzmann equation above and find the famous conservation law:

That is because, if the collisions conserve the number of particles, then there should not be any 'source' or 'sink' on the r.h.s.

My naive question is the following:

Hence, although this equation is very general, it does not seem to lead to Fick's laws of diffusion and yet I kind of remember that one can get the latter from some kind of expansion of at least a linearized Boltzmann equation...

Could somene unlighten me on this apparent paradox?

The confusion comes from the average flow velocity, the flux in general can be written as:

The previous expression is obviously for the flux, the first term which is the product of density and flow velocity is the most general definition of flux. Yet it can be expanded into two components (as in the left most part of my previous equation), a diffusive component described by Ficks law and a convective component.

The natural question now is, what is the difference between the flow velocity u and the convection velocity v. Physically speaking, the flow can be thought of being a result of two mechanisms, the first is Diffusion which is the spread of particles from higher density region to lower density region (driven by the internal energy of the system), have a look here. The second is Convection where particles are driven mechanically into new regions (driven by external forces exerted on the system). So the splitting into two components has a physical background as you can see.

The alternative simpler less general approach is to determine v by some very simplified means (without solving Navier-Stokes equation) and represent the general flux as summation of a diffusive component and a convective component. A good example here is plasma, where the force driving convection is electrical, so convection velocity is determined by:

Let us have a look at an infinitesimal volume element as described by Boltzmann equation. To make everything easier to explain for me I am going to assume there is only one dimension in space and velocity space. Since there is no force acting, the velocity distribution is isotropic. 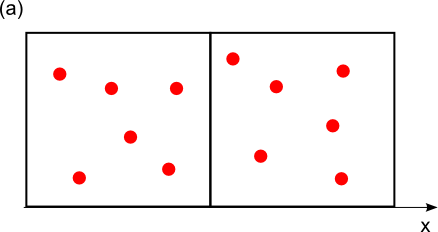 Compare that to case (b) where the number of particles is different (non-uniform density). On the interface there are 3 particles leaving from left box to right and 1.5 particles (I should have chosen an even number, my bad!!) go from the right box to the left. The net flux crossing the interface is directed from left to right, i.e. from higher density to lower density region. If you divide the net flux by density you get an average flow velocity to the right. 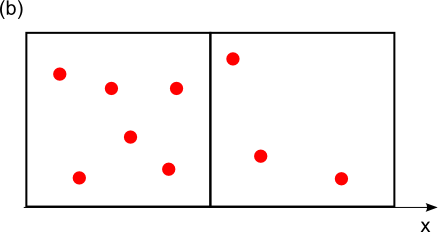 Not the answer you're looking for? Browse other questions tagged statistical-mechanics conservation-laws kinetic-theory or ask your own question.