Does diffraction occur before interference?

In the double slit experiment, light passes through two slits and the waves interfere and form an interference pattern. A single slit is required for diffraction.

So, I was thinking about whether the light in the interference setup undergoes diffraction first at the two slits?

I think that's the case, because light waves spread due to diffraction at the two slits. The two waves interfere to form the interference pattern. Is my thinking correct?

According to the Huygens–Fresnel principle, every point of the wavefront is a new spherical wave source. Of course, you don't see infinite individual waves; what you see is the result of summing (interference) infinite waves.

This means there is always interference, even if there are no obstacles. Diffraction would be a consequence of blocking part of the wavefront, so the waves which are left interfere in some fancy way. This principle can be used to describe refection, refraction and diffraction.

For a single slit several times bigger than the wavelength (the dots are the wave sources):

If the slit is as big as the wavelength you see a single spherical wave (I wouldn't be sure to consider this diffraction at all):

There is something similar to the Huygens–Fresnel principle in quantum electrodynamics. The path integral formulation says that when light (and any other particle) travels to a point $A$ to a point $B$, you have to sum every possible trajectory. Each trajectory has the same probability, they only differ in phase.

So for the two slit, if you compute each possible path you would get the classical result. 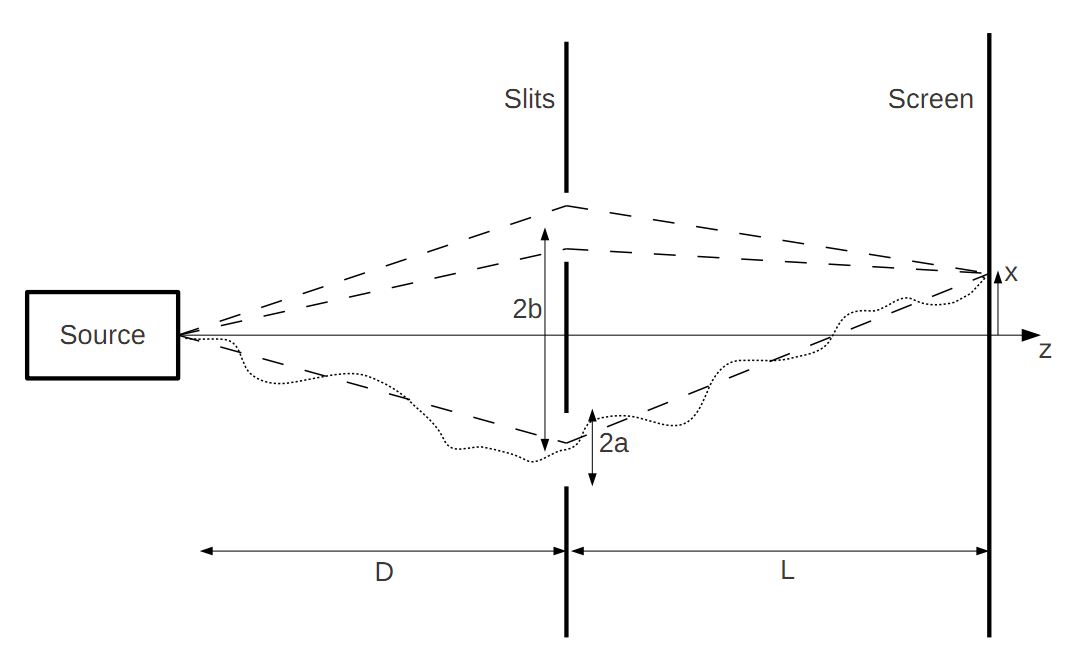 So I would say that diffraction is a particular case of interference where some part of the wavefront has been blocked.

Not the answer you're looking for? Browse other questions tagged optics visible-light double-slit-experiment diffraction interference or ask your own question.