Is a plasma a distinct phase of matter?

Long ago I learned that a plasma was a distinct state of matter after solid, liquid and gas, and also that it was achieved by imparting heat to a the matter. But most references describe a plasma as an ionized gas. So I'm having trouble understanding, what then, does it mean to be a distinct phase of matter? Is ionization, as opposed to heat, all that's required to make a gas a plasma? If so, what makes a plasma more distinguished than, say, an ionized liquid?

For clarity, there is a common misconception about plasma here. Plasma when being introduced for the first time to someone who doesn't know what it is, it is called "The fourth state of matter" which is an inaccurate description of it. Since this term is used for introducing some one to plasma, it is no big deal.

Plasma by definition is a mixture of free electrons and their ions (possibly negative ions). You need enough energy to liberate electrons from atoms. Roughly speaking, When you put that energy in a solid, energy might be dissipated as heat. If you put that energy in a liqued, energy might be dissipated in vaporization. If you put it in a gas it goes into breaking atoms and molecules (creating plasma). The following figure makes it clearer 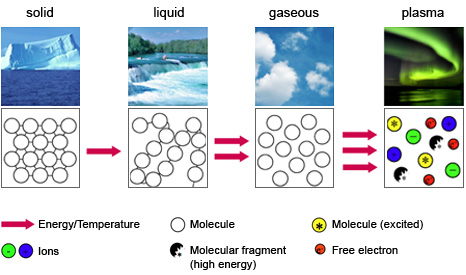 Hopefully that was useful

Plasma is said to be a distinct phase because it does not observe the usual description and physical laws that are used to describe the usual 3 states of matter, on several counts:

In the latter part, you have two questions which amounts to "What makes plasma a plasma?" Ionization is required to form a plasma, but there is no specific temperature requirement. Plasma can exist in interstellar space at around 100 K and in controlled laboratories at close to 0 K. The degree of ionization is usually represented as the ratio of charged ions to total (charged plus neutral) nuclei in a gas, and only a small degree of ionization (sometimes below 1%) is enough to make a gas behave like a plasma.

To be clear, a plasma is not the same as an ionic fluid, which is not a result of ionization but rather is made of cations and anions. Ionization means that electrons are set free from atoms or molecules. An ionic fluid is a salt in a liquid state.

Except plasma was the first state of matter, not the forth. All matter formed from plasma, it is not converted from matter to plasma, but from plasma to matter. This is why 99% of the universe is plasma. The electrons were never stripped from the atoms, they never were part of the atom until they are bound by the electrical energy in the plasma to form gasses, liquids and solids.

http://home.web.cern.ch/about/physics/heavy-ions-and-quark-gluon-plasma "For a few millionths of a second, shortly after the big bang, the universe was filled with an astonishingly hot, dense soup made of all kinds of particles moving at near light speed. This mixture was dominated by quarks – fundamental bits of matter – and by gluons, carriers of the strong force that normally “glue” quarks together into familiar protons and neutrons and other species. In those first evanescent moments of extreme temperature, however, quarks and gluons were bound only weakly, free to move on their own in what’s called a quark-gluon plasma"

And supposedly after 13+ billion years, only less than 1% of of that plasma has bonded into solids, liquids and gasses. The rest has bonded into a mixture of ions and electrons, condensed from that quark/gluon state.

Not the answer you're looking for? Browse other questions tagged thermodynamics plasma-physics states-of-matter or ask your own question.

0
Is plasma an intermediate stage of matter?
16
What's the difference between gas and plasma?
0
Why is quasineutrality required for a gas to turn into a plasma?
2
Plasma phase transtition from a Landau symmetry-breaking perspective

1
Intensive radiative heat transfer in very hot gas ( >5000K, gas core nuclear reactor related )
0
What is physics behind States of matter?
4
Heat capacity of solids vs liquids $s_{liquid} = 2\ s_{solid}$
5
How to classifies the distinct “plasma” phases of matter?
2
Is each level of ionization in a plasma a separate phase?
3
Critical point of a pure substance
1
Minimal quantity of substance to reveal its physical state properties
0
What is quark-gluon plasma?