Consider some basic cosine waves of the form ${E_i} = {E_0}\cos ({\omega _i}t - {k_i}z)$ with different amplitudes, frequencies and phases. We know a combination of such waves could result in a wave which has an envelope that is traveling at a group velocity and also has a phase velocity.

First part refers to envelope of the resultant wave and group velocity will be derived from this part and the other part deals with the phase velocity.

Deriving such a expression gives a better physical viewpoint of what we are dealing with than when we represent it in the form of a summation of some basic cosine waves. Plus such a relation for the wave function could make it so easy to find out many charactristics of the wave in a brief look at the expression.

Therefore it's so important and helpful to derive an expression for the wave which is caused by superposition of some basic propagating waves. But it was a simple situation.My question is that what if basic waves amplitudes were not the same?

When we are aware of propagation of some basic waves with unequal amplitudes and frequencies, how can we derive the relation for the resultant wave (which actually represent the only changing field in the medium)? And of course I have the same question about the expression for the group velocity.

Like what we did in relation to equal amplitude waves example, is it possible to derive the expressions only by use of simple trigonometric identities?

I'm pretty sure that we can't do any better with trig identities; it looks like any such expression would have a term vaguely like $\sqrt{1 + r \cos \theta}$, and then the square root ruins the nice intuition.

In lieu of that I'll offer a derivation of the group velocity that uses no fancy math at all! Hopefully that's what you wanted, even if you didn't directly ask it.

So let's back up and find some examples. When we talk about the envelope of a wave, we mean some curve you draw around an oscillation, like this. 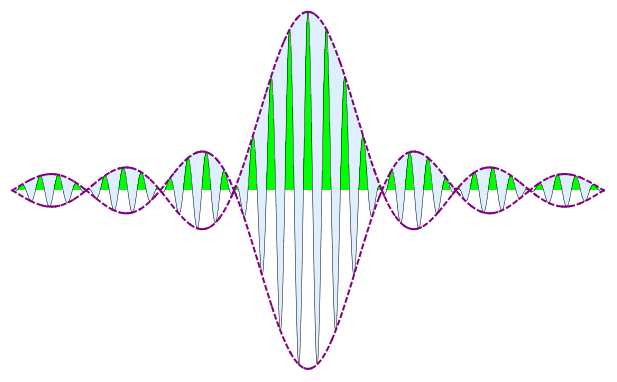 In order to do this, there must be a well defined oscillation to draw the envelope around. That means that our wave must be made up of individual frequencies that are close to one central frequency. To make things convenient, let's write that schematically as $$\text{wave} = \sum_{k'} \sin(k'x - \omega(k') t) \text{ for a bunch of } k' \approx k$$ However, if we just have one frequency, the wave is just an infinite sinusoid $\sin(kx)$. This doesn't have an envelope, strictly speaking, because it just goes on forever at the same amplitude. We must have waves of other frequencies, which will constructively and destructively interfere with each other, to actually get an envelope.

I think there is a misconception here. The point of writing the sum of two signals as product is NOT to compute the phase velocity or the group velocity. It is to show the difference between them only. It doesn't add any information to write the signals as a sum or a product.

Having two signals with equal amplitudes is a particular nice example because:

1.The mathematics is so easy.
2.The graph of this function has a clearly defined envelope and carrier.
3.Since the graph has a clear envelope, it means it is so easy to distinguish what is the difference between the phase velocity and group velocity. Yet you can’t tell what the value of any of them is.

One has always to keep in mind that phase velocity and group velocity are CHARACTERISTICS OF THE MEDIUM OF PROPAGATION. They don’t depend on the propagating signal; they depend on the medium of propagation. For every medium there is what is called a “dispersion relation” which is basically a relation relating the frequency to wave vector, or in another words the wave vector as a function of the frequency. For free space the dispersion relation is: $$ \omega=\omega_{(k)}=ck $$ A typical dispersion relation in plasma is: $$ \omega^2=\omega^2_p+3v^2_{th}k^2 $$ All the parameters in the previous equation aside from omega and k are medium parameters.

Having the dispersion relation, one can compute an expression for the group and phase velocity without knowing the signal. It is enough to know the frequency of the signal to know the wave vector. If a signal is sinusoidal or a summation of sinusoidal, their frequencies are well defined, so the phase and group velocity of every signal can be determined by substituting the frequency in the expressions of the phase and group velocity.

Now mathematically speaking, there is no general way of re-writing the summation of arbitrary sinusoidal signals as a product. The only practical way is to plot the summation as function of the phase which will show the periodicity of the signal (if it is periodic in the first place).

Not the answer you're looking for? Browse other questions tagged waves velocity or ask your own question.

3
Envelope of wavepacket and group velocity