Detecting if resistances are parallel or series in complex circuits

I know how to detect when resistors are arranged in parallel or series arrangement and
I can also find their equivalent resistance in simple circuits or when resistances are connected in form of
triangle but what happens when the arrangement is complex like this :

Which resistors are parallel and which are in series ? How can I find the equivalent resistance in such cases ? Is there rule or method for figuring this out ?

Alfred got in before me, but I have a diagram!

I've marked all continuous bits of wire in the same colour, and marked the corresponding colours on the ends of the resistors. A quick redraw later and I get:

which is a lot simpler!

Ok, the answers given so far are pretty good and I would always choose a graphical approach, but my experience tells my that some people have difficulties morphing graphs in their heads so here is a more formal way of doing it.

Close the circuit at points $A$ and $B$ with a voltage supply. You can identify three closed loops and apply Kirchhoff's second rule as indicated in my picture: 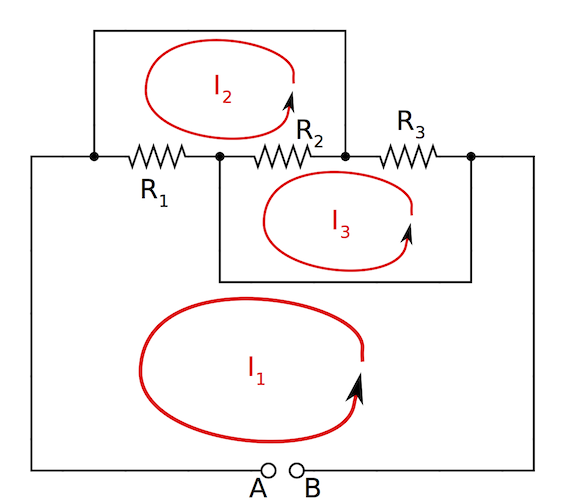 Assuming a voltage drop of $V$ between points A and B, we get:

Now we want to replace the circuit one with only one resistor, $R_{tot}$, thus we want $V=-I_1R_{tot}$. Note the minus sign. This is because we actually have a drop, not an increase in voltage. If you forget it, it's not so bad, just keep in mind that the final resistance should be positive.

Now, we can turn this into a matrix equation:

For this system to have a non-trivial solution, we need to have that the determinant of the coefficient matrix vanishes. This yields the equation:

Finally, we get the same total resistance we know we would get if $R_1$, $R_2$ and $R_3$ were in parallel. Therefore, the two circuits are equivalent.

Well, I guess this post turned itself into a reminder why you shouldn't try this in an exam.

Even simple circuits such as this can be drawn in such a way that it isn't obvious if the circuit elements are series or parallel connected so, when it isn't clear how they are connected, try redrawing the circuit until it is.

There are many ways to solve Complex resistor circuits -- Like Parallel axis of symmetry ,

For This is a very simple case , We will first need to define nodes a,b,c,d as in image. Redraw the circuit.Here ac and b,d are on same resistance , so circuit can be more simplified in all 3 resistor in parallel 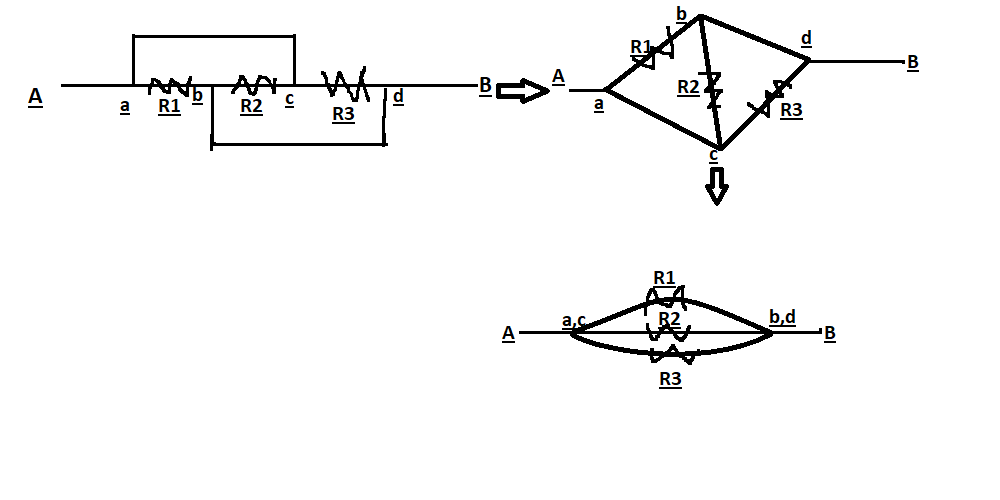 As the 3 resistors are connected within the same potentials they are parallel.

VIHARVIHAR
11
$\endgroup$
Add a comment  |
Highly active question. Earn 10 reputation (not counting the association bonus) in order to answer this question. The reputation requirement helps protect this question from spam and non-answer activity.

-2
Determining if two resistors are in series or in parallel.
0
In the given figure end A is connected to positive terminal and B with negative terminal of a 10 volts battery. How exactly will the current flow?
5
How to find the total current supplied to the circuit?
3
Finding equivalent resistance in complex circuit
0
Most general method of distinguishing between series and parallel resistors?

1
Resistors in series vs parallel
3
Capacitors and Resistors - Series or Parallel?
0
Determine which circuits are parallel and which are in series
1
Greatest and Least Resistance and Current Characteristics of Parallel vs Series circuits
3
Parallel resistances
6
How to detect if resistors are in parallel or series?
8
Why is the resistance in a parallel circuit smaller than the resistance in a series circuit?
0
Resistances in parallel
0
What happens when two identical real batteries are connected in parallel or in series?