Intuitive explanation of why orbits are closed?

Yesterday my brother asked me how orbits work. Suppose for the sake of the question that you are trying to put a rocket in orbit around the Earth. I explained that orbiting is essentially being in free fall while going very fast sideways, so that by the time you fall, there's no ground anymore and you keep going.

He said he understands that. His question was about why, after doing a full revolution around the Earth, you end up in the same place with the same velocity instead of doing, say, an inwards spiral. I admit I was stumped by this. Obviously, conservation of angular momentum prevents you from spiraling down to the center, but I see no reason why, at least in principle, you couldn't have a spiral orbit with an amplitude that increases and decreases periodically.

Is there an explanation for this that doesn't involve actually doing the math? Of course, the equations say this doesn't happen, but that doesn't help me understand any better, nor does it help me explain it to my brother.

That is because the gravitation force is proportionnal to $1/r^2$.

As a counter-example : if you look carefully at the orbit of mercury, it actually doesn't exactly come back to the same point with the same velocity after 1 turn. Instead, the major axis of the orbit rotates a little (about 0.15° per century) mostly because of the additional force from other planets (which is obviously not proportional to $1/r^2$).

Similarly, if you imagine a force (towards a fixed point) that is proportional to $1/r^\alpha$ with $\alpha \neq 2$, you would get a similar "orbit".

I don't think I could explain it further without some maths, however.

Way back in 1609, Kepler came out with Kepler's laws of planetary motion. It basically says that all orbits are an ellipse (slightly revised to a rotating ellipse caused by precession as noted by Nicolas). In an intuitive sense, perhaps this: when the planet or comet is far from the sun it slowly slows down and starts to fall towards the sun. When the planet or comet is close to the sun it quickly speeds up and shoots out farther from the sun. The act of falling closer to the sun, speeds up the planet or comet, hence it cannot spiral into the sun unless there is something else (some sort of drag, friction or crash) that slows it down. 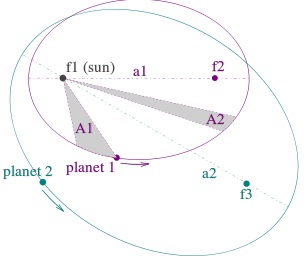 15
Is Feynman's explanation of how the moon stays in orbit wrong?
3
Intuitive understanding of Lagrange point L3
2
Projectile Path Farther Away From Earth
2
Sci-fi ships falling on planets
3
My question is about satellite motion and gravitation
3
Angular momentum of rotating and revolving body (earth)
3
Explosion of an asteroid in orbit
0
What would happen if you drew electricity from a magnet in orbit?