How does humidity affect the path of a bullet?

Last night, I was reading the FM 23-10 (The U.S. army official field manual for sniper training), and I've noticed that they're potentially teaching snipers incorrect information.

Generally speaking, when we say "impact goes up" it means that the bullet was either somehow made faster or its path was easier, therefore the curve in its ballistic trajectory is smoother. Thus, it will hit higher. When we say impact goes down, we mean the opposite.

For example, atmospheric heat will, loosely speaking, make the air "thinner" and therefore the impact will be higher. Cold weather will do the opposite. This part is correct.

They're basically saying that when humidity goes up, then the bullet's travel will be more difficult-> steeper trajectory curve -> lower point of impact.

However, as far as I know, dry air is denser than humid air because air has higher molecular mass than water vapour. In humid air water vapour replaces other gases, thus bringing the whole density down. So, the point of impact should be higher with higher humidity.

All other factors being equal, does humid air pose less resistance to the bullet making the point of impact higher than in dry air?

You are right. Field manual is wrong. Water has a lower molecular mass, which reduces air density.

But is the difference significant enough to notice?

Terminal velocity is the speed at which a falling body reaches a stable velocity when gravity and air resistance meet in a stable equilibrium. Let's assume the bullet travels close to terminal velocity so we can use its model.

Air density is charted above (credit to jaffer@MIT). You can see that in a hot climate of 30 deg C, air density has about a 3 percent from 0-100% humidity. But remember we have to take the square root of that difference - about 1.5%. So the most humidity can affect the speed of the bullet is 1.5%.

I don't know the math for how that affects a ballistic trajectory. Sorry.

It could be insignificant, which is why it they got it wrong. It's probably based on what people think intuitively, and backed up by confirmation bias. If it had a significant impact, you think they would know this by know. This scientific knowledge is not exactly new.

The field manual is wrong. 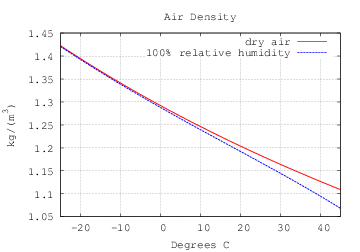 Today I have noticed that our humidity is extremely high compared to yesterday. The temp is about approx 5degrees F warmer today than yesterday. I just shot 30 rounds and noticed without any bias on this subject (no previous opinion) that my rounds were landing .125" higher than yesterdays 30 rounds. Hence why I am researching this subject of humidity and the impact on subsonic rounds. So for what it is worth, my experience has been humidity higher, POI higher. Then again, it could just be me.

According to several sources, such as http://longrangebpcr.com/accuracy.htm , you are right: higher humidity - higher point of impact. But those sources also point out that humidity effect is small.

I would expect the effect of density variations to be smaller than viscosity - yet not the one of water vapour rather that of the condensing water droplets. Remember that the manual says drastic humidity changes.

Apart from that, humidity changes usually don't come about on their own, they tend to be connected to changes in temperature (drops) and pressure - especially on time scales one would expect for a sniper waiting for a shot which, given the context, is in hours. Hence the question all other factors fixed doesn't fit the real situations expected by the manual (plus you'd have to specify what other factors you'd keep intact, since state equations bind some of them together, so you are not really free to change them arbitrarily).

Could be that the expanding gasses behind the projectile diminish faster as the outside air influenced the outcome ,herefore decreasing ramp time(bullet arc)wich lead to bullet drop on its intended path!pesonal experience in sub tempreatures using a 45acp had the same outcome at 15metres.2seprate 1911 pistols were fired and both litterally experienced bullet drop using the same reloaded ammo(185gr swc).normally we used the very same range and ammo when climate is humid_hot and bullets seemed to print on sight of aim or slightly higher 2-5cm.

All things being equal, I would tend to believe that water or vapor molecules are larger, tougher, and thus encountered more frequently thus slowing the bullet down.

user73728user73728
1
$\endgroup$
2
Add a comment  |
Highly active question. Earn 10 reputation (not counting the association bonus) in order to answer this question. The reputation requirement helps protect this question from spam and non-answer activity.

Not the answer you're looking for? Browse other questions tagged atmospheric-science humidity projectile or ask your own question.