How does the Super-Kamiokande experiment falsify SU(5)?

In his book "The Trouble With Physics", Lee Smolin writes that he is still stunned by the falsification of the $SU(5)$ Georgi-Glashow model by the null results of proton decay experiments.

I should like a simple but, if possible, quantitative explanation of how $SU(5)$ is falsified by the null results of attempts like Super-Kamiokande to witness proton decay? Obviously this theory foretells proton decay and we haven't seen it, but have we waited long enough or looked hard enough to say at a reasonable confidence that the null result falsifies the theory?

I am not a particle physicist, and you might see my outsiders answer to "What is the significance of Lie groups SO(3) and SU(2) to particle physics?" to gauge my level of competence.

Here is my reasoning so far, so, unless it is wrong (if so, please correct me), please use the following to help structure an answer.

So, the rate of decay is related to the size of the unification energy.

Presumably, if $SU(5)$ can be deemed falsified, we have a reasonable confidence in an upper bound to the unification energy such that the very slow proton decay rates ($<10^{-34} \mathrm{year}^{-1}$) consistent with the Super-Kamiokande null result imply a unification energy well above this upper bound. Usually quantum tunnelling rates are exponentially dependent on barrier sizes, so that small errors in energy barriers mean huge errors in tunnelling rates, so I'd be intrigued to see an analysis of the sensitivity of results to observational uncertainties.

So, in summary, here are my questions:

Since these things are probably well known to the relevant people, references instead of detailed answers would certianly be acceptable to me.

Our observations tell us that baryon and lepton number are conserved, within the accuracies of our experiments and observations. This means we have chosen as a standard model SU(3)xSU(2)xU(1) because in the group structure of the possible representations of all the quantum numbers assigned to the particles and resonances we know, there is no exchange particle that could change a proton to something else and no calculable Feynman diagram like: 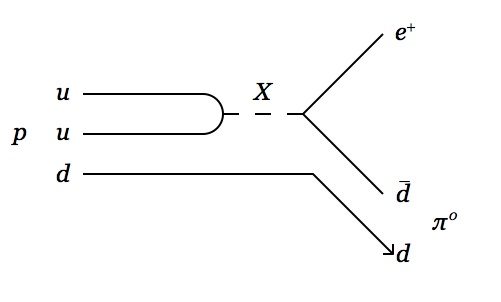 This means that within the standard model the probability for a proton to decay is zero with any precision in the perturbative expansions which we calculate crossections with.

Extending the standard model, i.e.stating that it could be embedded in a higher group's representations, as an SU(5) model, with the standard model embedded, introduces new particles that can be exchanged, which carry lepton and quark numbers such that their exchange allows a proton decay. In this specific model these diagrams have been calculated and give a lifetime of order of 10^36 years.

The experimental limits of the half life are close to 10^34 years.

So it is not that

Quarks and leptons would show themselves not to be fundamental but to be superpositions of the particles of the SU(5) theory.

They are fundamental in SU(5). It is the group structure that is extended, and new exchange paths that allow Feynman diagrams that lead the (non fundamental) proton to decay. This larger structure also introduces new particles, like leptoquarks. To discover leptoquarks is an objective for the new lepton collider under consideration.

Some beyond-the-Standard Model grand unified theories (GUTs) explicitly break the baryon number symmetry, allowing protons to decay via the Higgs particle, magnetic monopoles or new X bosons. Proton decay is one of the few observable effects of the various proposed GUTs. To date, all attempts to observe these events have failed.

This paragraph explains the "stunned":

Early grand unification theories, such as the Georgi–Glashow model, which were the first consistent theories to suggest proton decay postulated that the proton's half-life would be at least 10^31 years. As further experiments and calculations were performed in the 1990s, it became clear that the proton half-life could not lie below 10^32 years.

I suppose the book was written before the later calculations that recalculated the limit to 10^36years.

The reason we are not satisfied with the standard model and are trying extensions to higher groups and symmetries comes from the experimental observation that the coupling constants of the three interactions in the standard model tend towards the same region as the energies get larger. The theoretical urge to unite gravity to the other three forces which is supported by the cosmological observations to date are another strong impetus. But this is another stunning story :).

It is string theories that are trying to change our concept of "particle with specific quantum numbers" to "fundamental vibrating strings with specific vibrational levels". The future will tell.

Not the answer you're looking for? Browse other questions tagged particle-physics gauge-theory symmetry-breaking grand-unification or ask your own question.

13
What is the significance of Lie groups $SO(3)$ and $SU(2)$ to particle physics?
6
Spontaneous symmetry breaking in SU(5) GUT?
2
Alpha particle in vacuum

4
Why should the mass of leptons to be near of proton and QCD/chiral scales?
7
Non-renormalizable corrections to GUT unification
6
Spontaneous symmetry breaking in SU(5) GUT?
26
Are there massless bosons at scales above electroweak scale?
1
Missing energy in proton decay
5
Why symmetry breaking?
5
Detecting the electroweak unification in data of quark gluon plasma
1
$B$-$L$ global symmetry in the grand unification theories