Are Fresnel lenses widely used for solar electricity? If not, why not?

I was just wondering why Fresnel Lenses are not widely used in the production of solar electricity. Their use there would mean that you could produce heat within a fraction of a second, up to a few minutes and run a turbine to produce electricity.

Though it is used in welding, I am not sure what are the problems in producing electricity, as stated by this Wikipedia article:

New applications have appeared in solar energy, where Fresnel lenses can concentrate sunlight (with a ratio of almost 500:1) onto solar cells.

This is mainly an engineering & economics question; and we can deal with those aspects of it over on the Sustainability Stack Exchange, if you want.

And there is one conceptual physics aspect too.

No, fresnel lenses are not widely used for solar power. Occasionally, but rarely.

Concentrated solar power (CSP), including concentrated photovoltiacs (CPV) depend on direct rays. Ordinary photovoltaics do not; they generate electricity from light however it comes in; reflected off snow, or scattered by the atmosphere and by clouds. And you can find light like that all around the world. Whereas if you need high-intensity direct rays for a lot of the year, you're pretty much confined to the tropics and near the tropics. You can go further away (and there are indeed concentrating solar power stations further from the equator), but then you've got an economic problem. That's not something we can deal with here, so I'll leave that for now 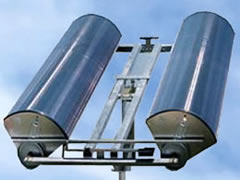 So, the first problem with CPV is that you need a lot of direct light, not just ambient light. Ordinary PV can make do with either. The second problem, is that no PV cell is anywhere near 100% efficient, and although CPV cells have got up to (roughly) 30-45% efficient, that still means that up to 70% of the energy could end as heat. Some will get reflected, but there'll still be 30-50% of the direct light energy going into concentrated heat. And that's all heat on the expensive CPV cell, that you've got to dissipate. The more successful the fresnel lens is in concentrating the light, the bigger your problem in preventing heat build-up, and the higher the equilibrium temperature on your CPV cell.

There are several reasons why Fresnel Lenses are not frequently used for solar energy collection; although they can be for small niche applications. Fresnel lenses are inherently single surface lenses; all of the optical power is on the serrated surface. The grooved structure of this surface is easily contaminated , needing frequent cleaning. They are expensive to make in glass, and most moldable optical plastics are UV degradable. The surface contamination problem can be overcome by putting the grooved side on the inside, towards the focus. This is the worst possible way to use a single surface refracting lens; the lens aberration are extremely large, whereas they are not too bad, with the grooved side out.

The axial edges of the grooves scatter a lot of light, greatly reducing the transmission efficiency. You already have an 8-10% Fresnel reflection loss from the surfaces anyway, so Fresnel lenses are inefficient compared to reflector mirrors, and even with plastic molded lenses the costs are high. Numbers like 500 x concentration are not possible with linear (one directional trough) Fresnels, and even with rotationally symmetrical lenses, achieving 500 x is difficult because of the scattering from the non active edges of the grooves.

Fresnel lenses are not used, but fresnel reflectors may be soon. There are two main ways in which electricity is generated from sunlight:

I think EnergyNumbers's Answer is an excellent one, but could leave some people a bit mystified by what exactly a "direct ray" is and what exactly its relevance is.

The essential idea here is that a Fresnel lens is an imaging machine: it puts a curvature on a low aberration wavefront so that that wavefront converges. Its working depends on there being approximately plane wavefronts at its input (if it is set up to concentrate light by focussing it) and it is intolerant of aberration. Light scattered from clouds has high aberration wavefronts. There is nothing special about "Frensel"; the following applies to all imaging optics. Consider an unentangled photon coming straight from the Sun (see my footnote): its wavefront is almost plane as it reaches the concentrator from the Sun. There may be a small amount of "twinkle", i.e. the wavefront has been distorted a little through interaction of the atmosphere, but the aberration is small. Therefore the focus can be tight: all the way down to the Abbe limit if there is no aberration.

On the other hand, light that reaches us after interaction with clouds has a wavefront that is wildly contorted. Imaging optics simply will not concentrate it, a fact that can be seen in the high sensitivity of a lens's Strehl ratio to aberration. Think of a laser shone at a roughly ground piece of glass: you see speckle. The light is still perfectly "coherent" in the sense of being highly statistically correlated at different points in space and time, but the wavefronts are all over the place and cannot be concentrated by wavefront processing, i.e. by imaging optics.

Now rays are simply a way to describe the normal to a light field's wavefronts - indeed the ability to think in terms of rays depends on the Eikonal approximation to the Maxwellian, photonic description I alluded to above. Another way to think of all of this is through the law of conservation of étendue, or the second law of thermodynamics applied to light. Incoming "direct" solar radiation is made up of parallel rays, perfectly aligned. Its étendue, or entropy is nought or very near thereto (Look up the Wikipedia page on étendue for its definition). Scattered from clouds, the input to a concentrator is made up of rays spread randomly in all directions - this is a high étendue configuration. This puts a severe limit on how much such light can be concentrated: the concentrator simply cannot decrease the étendue: the beamwidth can only be losslessly shrunken by increasing the spread of angles in the ray bundle describing the light.

So, in EnergyNumbers's Answer, a "direct ray" is to be understood as a member of a low étendue, well aligned ensemble.

And, to answer the problem of high étendue light: we build things like photovoltaics which work with unconcentrated light. There is no étendue problem to get around here: photovoltaics simply live with étendue and do not need any concentrator at all (this is not highly related to why photovoltaics are of low efficiency by the way).

Footnote: I only raise the "photon" description here as it helps demystify why we can treat a laser or a highly collimated incoherent beam i.e. light directly from the Sun, in exactly the same way as far as imaging optics are concerned. If the photon description of light in these terms is unwonted to you, see my answer to "How can we interpret polarization and frequency when we are dealing with one single photon?". Essentially, when you look at light one photon at a time, a laser beam and a collimated incoherent beam are the same: lone photons propagate by Maxwell's equations and so their field has wavefronts and interference and all the other things we wontedly associate with coherent light - in Paul Dirac's words, each photon interferes only with itself - so it is like a little coherent beam. At least, this thinking works for unentangled photons.

They are not generally used with the photovoltaic cells as they concentrate the sun light and heat to a temperature so high that many of the cells get, for lack of a better word, fried.

Not the answer you're looking for? Browse other questions tagged optics energy electricity renewable-energy lenses or ask your own question.

4
Would putting a magnifying glass on a solar panel be beneficial?
28
Why do solar panels not have focusing mirrors?
22
How can we interpret polarization and frequency when we are dealing with one single photon?
4
We just need a solar panelled SPAIN to power the world?
0
which is efficient on solar electricity by photo voltaic or thermal

5
Why is the steam from cooling towers not used?
20
Where does electricity go from a solar panel that is not plugged in to anything?
3
Why exactly are images formed by lenses/mirrors?
10
Will the upcoming solar eclipse stress the European electrical grid?
0
Why can't concave lenses be used as magnifying glasses?
1
How are progressive lenses made to allow for continuous changes in prescription?
38
Why are solar panels kept tilted?
1
Why mirrors are not used in optic fibres?