Parallel Transport of a 4-vector 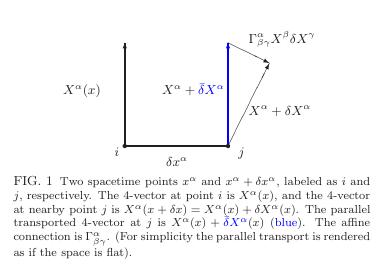 This is also discussed in D'Inverno's relativity book [page - 72]; but the reason is not clear.

I really don’t like that diagram. No, REALLY. I think it conveys a bad intuition that may confuse you. I don’t like what it does with the connexion coefficients (Christoffel symbols). Here’s why.

In a general manifold, tangent spaces of course are not comparable at different points. This is in contrast with the situation in Euclidean space, which can be taken as isomorphic to the tangent space to any of its points.

So to define a “change” in shifting between tangent spaces at different points, we need to define some mapping which defines how our basis vectors in the first tangent space are mapped to those in the second. Once we define that mapping, we have something that we can measure “change” relative to. We take an original vector in the tangent space and we find its image under this mapping and declare this image to be “the same as” the original vector for the purposes of measuring change and thus defining for example a derivative.

It turns out, however, in general manifold that this mapping, i.e. “parallel transport” depends on the path. Refer to Aman-Abhishk’s neat summary of parallel transport around a closed loop to understand intuitively why this is so. More abstractly, although we have a great deal of freedom in defining our connection and covariant derivative, the latter has to fulfil the Leibniz rule. This forces restrictions that mean that the “no change mapping” of parallel transport in general depends on the path (see footnote, though). What this means is that there is no set of vector fields on the manifold whose tangents we can use as reference vectors. Wouldn’t that be easy? We’d just measure how vector changes relative to these tangents. But of course, this would imply that the parallel transport were independent of path.

So here is what I believe to be a better diagram. 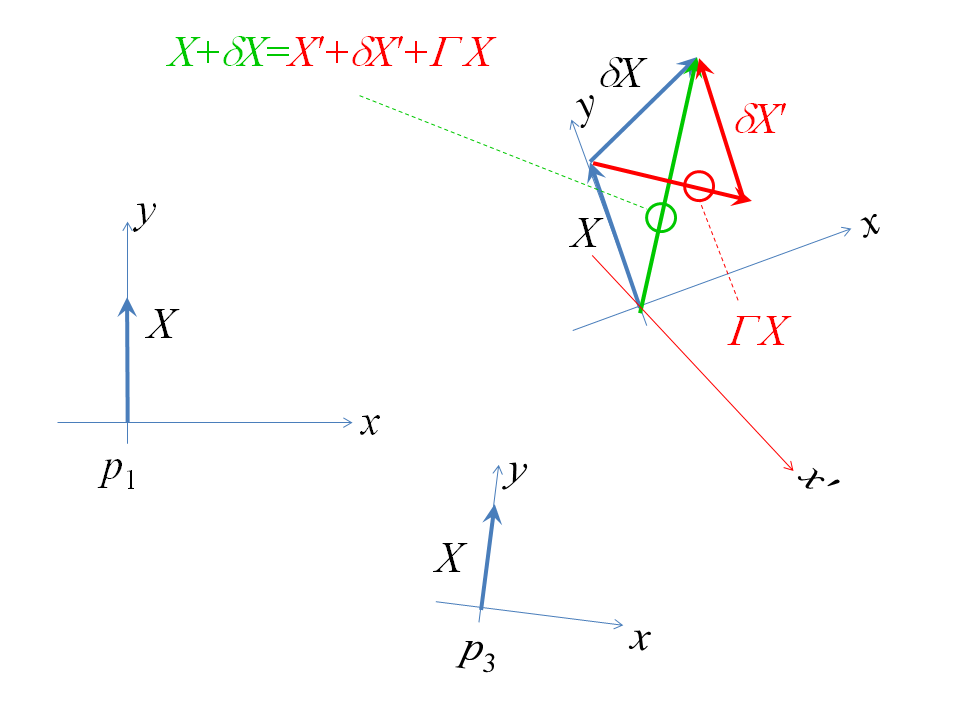 I’ve drawn the tangent spaces to three points on a two-dimensional manifold. The directions marked $x$ and $y$ in each case are tangent vectors to two orthogonal vector fields which we might hope to use some kind of reference. We can indeed choose a connexion such that the connexion coefficients vanish at one point: let this be the point $p_1$ in my diagram. So in this case parallel transported versions of the vector $X$ stay “aligned” to two reference vector fields. So I’ve worked out through the covariant derivative what the big green vector at point $p_2$ must be if we work out the change in this vector (independent of coordinates of course): our parallel transport mapping leaves $X$ aligned to the $y$-axis, and then we just add on $\delta X$. Likewise our parallel transport leaves $X$ aligned to the $y$-axis when we shift to point $p_3$. However, as Aman-Abhishk’s neat summary of parallel transport around a closed loop shows, we can’t in general pull this trick off if we begin with the vector at point $p_3$ and work out its change through the covariant derivative in shifting to $p_2$. Our parallel transported $X$ around the loop is in general nonzero. So there must in general be some component $\Gamma X$ so that our parallel transported $X$ in going straight from $p_1$ to $p_2$ is different from that in going from $p_1$ to $p_2$ to $p_3$. Here $\gamma\in GL(N, V)$ is the square $N\times N$ matrix (here $N$ is the manifold's dimension, in this case two) of the parallel transport map. The “no-change” parallel transported vector $\Gamma X$ is different this time, and this is what the connection coefficients measure. The “absolute change” in going from $p_2$ to $p_3$ is shown as $\delta X^\prime$.

Footnote: The noneuclideanhood (i.e. deviation of a manifold's geometry from fulfilling the Euclid parallel postulate) is in general encoded in two quantities, the curvature and torsion tensors. It is the curvature that measures how vector changes when parallel transported around a loop. General Relativity, as with theory on a psuedo-Riemannian or Riemannian manifold, makes use of one of the co-called "fundamental theorems of Riemannian geometry" that one can always define a connexion to absorb the tortion, i.e. set it to nought. In this case, parallel transport always depends on the path. However, it is still possible to have non-Euclidean geometry without curvature but nonzero torsion: as with Christoph's comment below, Einstein's teleparallelism is one theory that is curvature free. A more wonted example is that of a Lie group: one can define parallel transport by the idea of left (or right) translation of vectors. Since the translation is effected by the group member that is also the point of the manifold in question, parallel transport cannot depend on path! However likewise most Lie groups have nonzero torsion as in general they are most decidedly "not flat"! 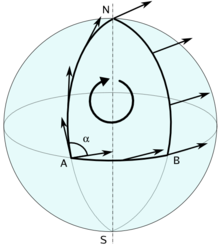 shows how a vector generally does not remain parallel to itself under parallel transport. The vector here is moved along the path A-N-B and is constrained to remain in the tangential plane to the spherical surface at all points of the path because the geometry does not know of the "third" dimension (which is normal to the surface) just like one does not tilt the vector out of the plane in the while taking it from A to B in 2D vector geometry.

Now you can probably convince yourself that a vector located at A and infinitesimally close to it along A-N have indeed changed by a small amount, just like in the case of circular motion. If you describe this situation on a flat sheet, you will get your diagram.

Not the answer you're looking for? Browse other questions tagged general-relativity differential-geometry or ask your own question.

8
Is it possible to explain general relativity without tensors?
3
What is a covariant derivative in gauge theory?