Pendulum with water dripping out

Consider a pendulum, consisting of a string of length $l$ tied to a ball of negligible mass and radius $r$. The bob is filled with water, which has density $d$, and the pendulum is given a small push and left to oscillate. There is no friction or damping.

This is an analysis I've heard during a high school class. Qualitatively, when the water level is nearly full, the CG of the bob is at its centre, so the length of the pendulum is effectively $l+r$, and it oscillates with the corresponding period. As water drains out, the CG is lowered, until it reaches $l+2r$ , and the period of the pendulum correspondingly increases. Once all the water has drained out, the pendulum resumes oscillating with a length of $l+r$.

Questions: Is this analysis correct? I'd really like to know the quantitative model for this.

Not quite. But before getting into the math, you'd need to fix up the problem a bit: if the string and the ball are both massless, then there will be nothing left to oscillate once the water drains out. It probably makes the most sense to assume that the ball is a uniform spherical shell with a mass $m$. For simplicity, I'll make two more assumptions:

I'm also using the result which Georg brought up, that the surface of the water remains perpendicular to the pendulum's axis even as it swings.

First I'll compute the volume of water in the ball when it's filled up to a height $h$,

and then the moment of that water,

To find the overall center of mass, you add this to the moment of the sphere (which is zero since its center of mass is at $z = 0$) and divide by the total mass. Since $M = dV$, we get 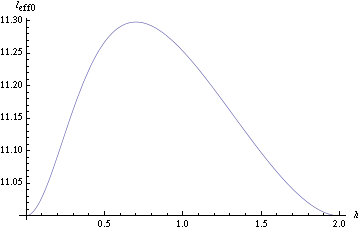 However, as Georg also mentioned, approximating the pendulum as a point mass on a string of varying length isn't quite accurate. To do better, we can use the rotational equation $\vec\tau = I\vec\alpha$ to account for the pendulum's finite extent perpendicular to the axis. The torque is produced by the force of gravity acting downward through the center of mass, and after a little rearranging the equation becomes

where $I$ is the moment of inertia of the pendulum and $r_g$ is the radius at which the gravitational force acts.

Notice that the behavior of the pendulum in this model is determined entirely by the value of the constant $\omega^2 \equiv \frac{mg r_g}{I}$. For a point pendulum of length $l$, you have $r_g = l$ and $I = ml^2$, so $\omega^2 = \frac{g}{l}$. We can therefore define the "effective length" of a more complex pendulum as the length that gives the same value of $\omega^2$,

For the dripping pendulum, we already have $r_g$: it's just the radius of the swing of the center of mass, which is what you were calling "effective length" in the problem. But the new definition also incorporates the moment of inertia of the pendulum bob around the pivot point.

The second and fourth terms in $I$ come from the parallel axis theorem.

Putting it all together, we get a long but straightforward expression which can be written as: 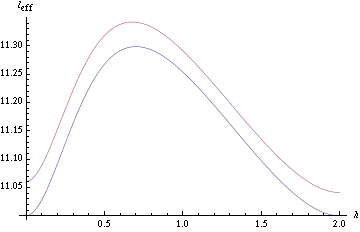 The red line is $l_{eff}$, the blue line is the swing radius of the center of mass (the same thing that was in the last graph) just for comparison. Notice that for these values they're pretty similar, and as $r$ shrinks relative to $l$ the curves get even closer together.

In fact, you can show this from the analytical analysis as well. I won't show the complete details, but if you eliminate $h$ and $r$ in favor of $\epsilon = \frac{h}{r}$ and $\beta = \frac{r}{l}$, and do a series expansion in $\beta$, if Mathematica is to be trusted, you wind up with

In other words, the amount by which the sphere is filled doesn't even matter until you reach the fourth-order correction in $\frac{r}{l}$.

Not the answer you're looking for? Browse other questions tagged classical-mechanics fluid-dynamics or ask your own question.

6
Movement of a cylinder filled with water
1
Rate of Dripping of tube
1
Water coming out of dam gates
5
Why won't the water pour out?
3
Pendulum with rope vs. rod
1
Would water flow out of this container?
2
Squeezing water out from wet cloth