Is the firewall paradox really a paradox?

The firewall paradox is a very hot topic at the moment (1207.3123v4). Everyone who is anybody in theoretical physics seems to be jumping into the action (Maldacena, Polchinski, Susskind to name a few).

However, I am unable to see the paradox. To me Hawking's resolution of the information paradox (hep-th/0507171) also resolves the so called firewall paradox. Hawking never says that the information is not lost on a fixed black hole background. In fact, he says the opposite. He says (page 3): "So in the end everyone was right in a way. Information is lost in topologically non-trivial metrics like black holes. This corresponds to dissipation in which one loses sight of the exact state. On the other hand, information about the exact state is preserved in topologically trivial metrics. The confusion and paradox arose because people thought classically in terms of a single topology for spacetime."

To surmise, in quantum gravity you don't know if you actually have a black hole or not, so you have to include the trivial topologies, including those when there isn't a black hole there, in the amplitude. Only then do recover unitarity.

It seems to me that the error of the AMPS guys is that they use a fixed black hole background and assume conservation of information (i.e., late time radiation is maximally entangled with early time radiation). It is no wonder they are lead to a contradiction. They are simply doing the information paradox yet again.

They give a menu of implications in the abstract: (i) Hawking radiation is in a pure state, (ii) the information carried by the radiation is emitted from the region near the horizon, with low energy effective field theory valid beyond some microscopic distance from the horizon, and (iii) the infalling observer encounters nothing unusual at the horizon.

But the obvious solution is that (i) is wrong. The radiation, within the semi-classical calculation in which they calculate it (i.e., not quantum gravity), is non-unitary.

So my question is, why is this a paradox? Something so obvious surely can not be overlooked by the ``masters'' of physics. Therefore I'd like to hear your opinions.

Here are my two cents.

There is a community in which Hawking's solution was ignored, and the only accepted one was the black hole complementarity of Susskind, Thorlacius, and Uglum. The firewall discussion takes place within that world.

Susskind claims in his book The Black Hole War: My Battle with Stephen Hawking to Make the World Safe for Quantum Mechanics, and others follow him, that he defeated Hawking, who, in 2004, conceded the bet against Preskill. In fact, Hawking was probably not convinced by Susskind's proposal, but by Maldacena's AdS/CFT correspondence. But AdS/CFT doesn't give the explanation how the information is recovered, and Hawking proposes his own solution, not being based on stretched horizon and black hole complementarity. In fact he still believes that, if we consider only a history, for General Relativity + Quantum Physics the problem persists, and it is resolved only when summing over all topologies.

It seems like the AMPS paper considers only the black hole complementarity. They don't consider other proposals, such as Hawking's. So, with respect to that framework, AMPS find a problem with the black hole complementarity, namely that it is not enough, and a firewall should be added. Susskind considered this idea earlier in his book An Introduction To Black Holes, Information And The String Theory Revolution, page 84, when he named it "brick wall". The "paradox" is that the firewall seems to be required by unitarity, but the existence of such a firewall contradicts the principle of equivalence.

My main reason why I find his argument insufficient is that it doesn't really solve the problem, unless you sum over different topologies, and the used measure allows the solutions that violate unitarity to cancel each other. It is again a personal opinion.

I think that the reason why his solution was not accepted like Susskind's is because it relies on a less popular approach to quantum gravity. The Susskind, Thorlacius, and Uglum (STU) argument was presented in a form which make it look as it only relies on three principles accepted by everyone:

so it doesn't seem confined to a particular quantum gravity approach. Also, it seemed to solve the problem for each spacetime, and not only in a sum over topologies.

Another reason may be that, at the time when Hawking proposed his solution, the black hole complementarity was considered for over a decade to be the good solution by a dominating community. It stimulated research in superstring theory of black holes, and other approaches to quantum gravity tried to explain the information from the stretched horizon.

It is also possible that this is a historical accident, and if Hawking had proposed his solution before Susskind, it would have been accepted his, and not Sussikind's. I actually think that Susskind's would have been rejected long time before the AMPS argument, if there was an alternative to save unitarity. Probably the arguments would have been

Maybe this made Robert Wald in his recent talk at the Fuzzorfire workshop, to state that the proposed cures (including complementarity) are worse than the disease:

I find it ironic that some of the same people who consider “pure -> mixed” to be a violation of quantum theory then endorse truly drastic alternatives that really are violations of quantum (field) theory in a regime where it should be valid.

So, I agree with the question, that the AMPS argument and firewall discussions are just the realization that the Hawking's paradox was not solved by BH complementarity.

Let me mention another possibility, more recent and less known. Most solutions concentrate on the event horizon, and what happens there. While this important, let's not forget that the information appears to be lost not on the horizon, but at the singularity.

There is an analytic extension of the Schwarzschild solution through the singularity. This replaces the usual Penrose diagram (fig. A) with another one (fig. B), which is globally hyperbolic, and might allow information to be recovered. 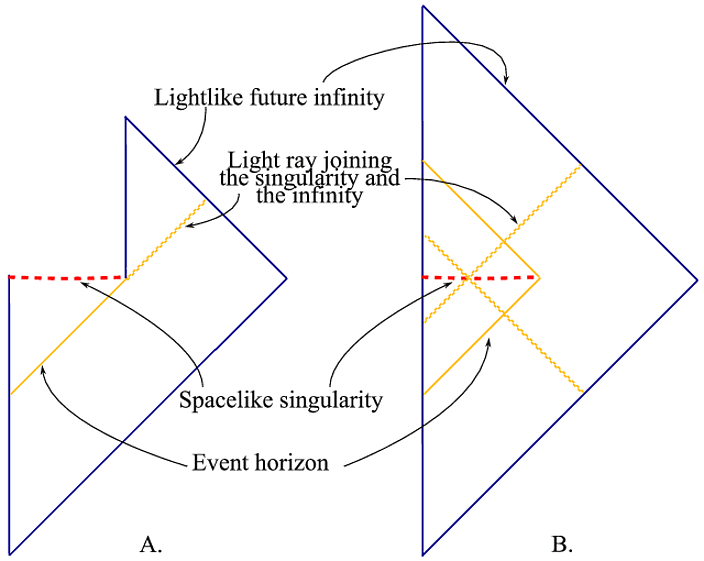 I will stop here, because it becomes self-advertising. There are more questions, but I will not detail here. Some of them answered in the papers here (where there is also my email address). A less technical paper is here. Also I plan to write more about this soon on my blog.

This is a contentious subject, and you'll obviously get different answers from different people. But for whatever it's worth, here's my personal take.

Hawking's 2005 "solution" to the information-loss problem has never made sense to me. My difficulty is quantitative: what, exactly, is the amplitude for a black hole never to form, and for the metric to remain topologically trivial? If the amplitude is exponentially small, then there wouldn't seem to be any way that it could unitarize a process that otherwise wouldn't even be close to unitary. On the other hand, it's hard to see how the amplitude could be large without a dramatic deviation from GR in regimes where GR was supposed to work. In any case, Hawking doesn't specify.

Of course, it's entirely possible that I'm simply missing something obvious. But I've asked John Preskill and several other black hole information experts, and they tell me they don't understand Hawking's claimed resolution either (or in particular, how it's supposed to resolve AMPS). Lubos Motl says he understands it perfectly, but his blog posts about it again didn't make any sense to me -- maybe someone else can explain them.

Now, it could be that the "topologically trivial metrics" that have large amplitudes really look and act almost exactly like black holes, and are only "not black holes" in the sense that the singularity gets resolved by quantum gravity effects. But in that case, we still have the problem of explaining how a qubit that an infalling observer sees falling toward the singularity, also gets emitted from the horizon from an external observer's standpoint. Does it "slowly make its way" from the singularity back to the horizon (as I think is suggested by the fuzzball approach)? Does it teleport out (as proposed by Horowitz and Maldacena), or get out via an ER bridge? Or was it "also" on the horizon all along, from a complementary perspective? In other words, it seems we still have the "black hole information problem" as most people would understand it.

More generally, I think it's easy to get trapped in fruitless verbal debates -- e.g., whether a quantum-gravitational object that looks and acts like a black hole is "really" a black hole or "really" something else. So for me, one of the strengths of AMPS is that it can be phrased "operationally": i.e., purely as a question about what different observers will experience (and how to reconcile their experiences), rather than as a question about particular theories and approximate calculations. Namely, the question is this:

By acting unitarily on the Hawking radiation emitted by an old enough "black-hole-like object," can an external observer radically and "nonlocally" alter what an observer who jumps into that object will experience?

If you believe in complementarity, then AMPS argue that the answer would appear to be yes, since otherwise we get a gross violation of monogamy of entanglement. So, in that case, you have the burden of giving some account of how the influence propagates "nonlocally" (for example, does it do so via wormholes? do we need to give up entirely on the concept of locality?).

Crucially, it's no answer to say that "the radiation, within the semi-classical calculation in which they calculate it (i.e., not quantum gravity), is non-unitary." For we're not asking about what things look like in the semiclassical approximation: rather, we're asking about what the infalling observer would actually experience if we did the actual experiment. I.e., if a suitable unitary transformation U were applied to faraway Hawking radiation, would that nonlocally cause the infalling observer to see a firewall (or the Easter Bunny, or whatever else U corresponded to), or not?

Not the answer you're looking for? Browse other questions tagged quantum-field-theory quantum-gravity black-hole-firewall or ask your own question.

8
Could you theoretically map the internal distribution of mass in a black hole using Hawking radiation?

10
Thermodynamically reversed black holes, firewalls, Casimir effect, null energy condition violations
3
Why doesn't the firewall argument also apply to far away ingoing modes?
18
What happened to the black hole firewall theory?
2
Would I be vaporised by incoming light if I crossed the event horizon of a black hole?
6
What does QFT say about non-linear processes?
1
Black holes are excellent scramblers, but can they scramble points in the string-theory landscape?
6
How does Hawking radiation emerge from the shadows?