What is the significance of Lie groups $SO(3)$ and $SU(2)$ to particle physics?

I was hoping someone could give an overview as to how the Lie groups $SO(3)$ and $SU(2)$ and their representations can be applied to describe particle physics?

The application of Lie groups and their representations is an enormous field, with vast implications for physics with respect to such things as unification, but I what specifically made these groups of physical importance and why there study is useful.

I have just started studying these two groups in particular, but from a mathematical perspective, I'd very much appreciate understanding some sort of physical motivation.

QuantumMechanic's links turn up a dizzying array of meanings for $SU(2)$ in physics, so your question probably turns out to be too broad for a simple answer. Nonetheless, I do like it, and similar questions that grope for pithy overviews of things, so I'll try to answer it with my non particle physicist's understanding.

Probably the "main" meaning of $SU(2)$ you're going to find is as the (or highly nontrivial part of the) gauge group of certain Yang-Mills-kind theories (see Yang-Mills Wiki page), notably:

In the case of gauge theories, my understanding of their importance (the ones of the Yang-Mills kind with a finite dimensional structure group) is in this answer. If you're a bit slow on the uptake like me, you may need someone to point out to you that "all we're doing" in constructing a gauge theory is building a fibration on a physical observable theory and the gauge group is nothing more than the fibre bundle's structure group: we put hair on a theory and see what beautiful braids we can make with it. (Yes, I really did need someone to point this out explicitly to me, even though I have a reasonable grasp of fibre bundles!) But why do we do this, i.e. on the surface seem to add complexity, when it would seem the aim of physics to simplify things, not kit them with more hair (complexity)? There are two answers here:

Other resources that I found helpful - particularly if you haven't already delved into gauge theories - are the following:

I found the first two papers by Baez/Huerta and 't Hooft invaluable here. Like I said, I am not a particle physicist but after reading this I feel I can at least follow many discussions in this field without too much (let's say < 80%) going over my head. Thanks to John Baez and his wonderful literature, I think that withering away in a nursing home is not going to be too bad, if I can still read by then! (this isn't in the offing BTW). I find almost anything written on physics and its relationship with mathematics by Baez, 't Hooft and Penrose well worth reading. There was (likely still is) an excellent introduction to gauge theory on Gerard 't Hooft's webpage but the webpage itself is a bit hard to navigate and I can't find it at the moment - I guess such disorganisation is inevitable for someone as polymathematic as 't Hooft is wanting to share so much varied material.

But maybe the deepest, simplest and (for me, the most beautiful) meaning of all for $SO(3)$ and $SU(2)$ is the simple relationship between the two groups, the one being the universal cover of the other (see my answer here), as was taught to me indirectly by a seven year old boy (the depth of physical meaning, rather than the universal cover property) when I was demonstrating the Dirac belt trick and cup tricks at my daughter's school and he asked the question "can you make a fancier arrangement of ribbons so that you have to spin her [the doll] three times rather than twice to get back to the start?" (I use a doll on a ribbon rather than just a marked card with children because, as social animals, we're hard wired to ken a face, so keeping track of the spins is unmistakable with a doll. Many smallish children of about six years old and over find the belt trick really enthralling, BTW.)

I was thoroughly impressed by his question and wished I could answer it better for him. But as far as particles are concerned, the answer is the same: an emphatic no: there are only half integer spins, not spin $1/3$ and so forth, because $SU(2)$ is the universal cover of $SO(3)$. There are only bosons and fermions in the World, and the double cover relationship between $SO(3)$ and $SU(2)$ is why - "a simply connected topological space admits no non trivial coverings" to quote from W. S. Massey, "Algebraic Topology: An Introduction" - so the universal cover is the whole gig! The belt trick works because the evolution of the Serret-Frenet frames along the twisted ribbon encodes a continuous path through $SO(3)$ from the identity to the transformation defined by the doll's orientation in space and so the ribbon precisely encodes the homotopy class of this path. If you can loop it over the doll (deform the path continuously) and undo the twists, the ribbon is still encoding the same homotopy class. The belt trick is a precise physical analogy to the mathematical procedure for building a universal cover. So this humble observation about the relationship between $SO(3)$ and $SU(2)$ explains all the following:

Truly I find this simple relationship is a little jewel to behold. There is a footnote in Chapter 17 of the third volume "the Feynman Lectures on Physics" where Feynman says he had been trying to find a simple demonstration that there are only half integer spins and had failed - "We'll have to talk about it with Prof. Wigner, who knows all about such things"!, he ends the footnote. I rather think Feynman, from what I know of his work and sense of humour, would have been delighted to have the explanation suggested to him by a seven year old, were he alive.

Lastly, I'd just like to mention how $SU(2)$ and $SO(3)$ show up in my own field of optics and electromagnetism. It's not quite what people wontedly mean by "particle physics" but it is an application in the physics of the photon. The general polarisation state of a one-mode electromagnetic field $\Psi = \left(\begin{array}{c}\psi_+\\\psi_-\end{array}\right)$ can be encoded in two complex amplitudes, one for each circular polarisation's basis state (or, amplitudes of the two Riemann-Silberstein vectors for a given wavevector more as discussed in my answer here ). A lossless polarisation transformer (waveplate, mirror system, and so forth) must impart a general unitary transformation on these two amplitudes, for the sum of their square magnitudes is the wave's power. Often, we're not worried about phase that is common to both polarisation eigenstates, so we can think of the matrix of our polarisation transformer as living in $SU(2)$ rather than $U(2) \cong SU(2) \otimes U(1)$, but the Jones calculus actually handles $U(2)$ as well:

In this context, $\mathbf{U}$ is called the transformer's Jones Matrix. We can also represent the polarisation state by the Stokes parameters:

or, alternatively, the unit sphere of Stokes vectors $(s_1,\,s_2,\,s_3)^T$ is transformed by precisely the rotation $\exp(\theta \,\mathbf{H})$ matrix corresponding to $\mathbb{U}$ when the latter is mapped by the standard adjoint representation homomorphism:

so that we can visualise polarisation state changes as rotations of the unit sphere, as long as we are happy to be blind to the difference between a transformation $\mathbf{U}$ and its negative $-\mathbf{U}$, i.e. we are happy to see only cosets of this homomorphism's kernel.

A slight generalisation of this procedure is to use Mueller Calculus(see Wiki page "Mueller calculus", which is the density matrix notation in disguise and can deal with partially polarised light states, which are classical statistical mixtures of pure quantum states. I describe this aspect of the Mueller Calculus in my answer here.

I will insert here an experimentalists introduction to SU(2) and SU(3).

Back in the sixties we were organizing the exciting resonance data we got from a multiplicity of experiments into spin Regge poles . Spin was organized in SU(2) multiplets since nuclear physics studies, and the analogue was recognized in isotopic spin ( proton up, neutron down) and used extensively for the new particles discovered. So spin and isotopic spin, i.e. SU(2) had an early significance for experimental physics, on which any more extensive theories could be based.

Then came the revelation of the eightfold way, 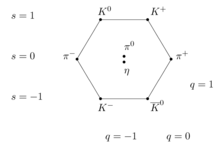 It was very exciting at the time to see that the mesons, painstakingly organized into SU(2) multiplets, had an extra symmetry when a new quantum number was used, a symmetry that was beautifully fulfilled by the multiplets of SU(3) groups. Groups became very important to the organization of physics data, and were inputs to the theoretical foundations that might describe those data after 1970. Thus higher groups, like SO(3), were explored and/or utilized .

Not the answer you're looking for? Browse other questions tagged quantum-mechanics particle-physics symmetry group-theory lie-algebra or ask your own question.

0
How is group theory related to particle physics?
15
What is the basis of gauge theory?
7
Lie Groups and group extensions?
29
How does the Super-Kamiokande experiment falsify SU(5)?
8
Why gauge theories have such a success?
13
If photons carry 1 spin unit, why does visible light seem to have no angular momentum?
7
A Puzzle about $SO(3)$
2
Two soft questions about spin and the particle nature of electrons
4
Existence of spin-$\frac{1}{2}$ representation corresponds to $\text{SO}(3)$ having double cover?
3
$SO(3)$, $SU(2)$ and symmetries in quantum mechanics
See more linked questions

9
How to model a symmetry using Lie Groups?
7
Lie Groups and group extensions?
2
Symmetries & Lie groups in physics
5
Unitary groups and infinitesimal transformations - Schwingers way of deriving Lie groups
15
Why Lie algebras if what we care about in physics are groups?
0
Some clarifications about the ideas of representation of a group