The relativity of simultaneity: a classical example

Look at the following example: 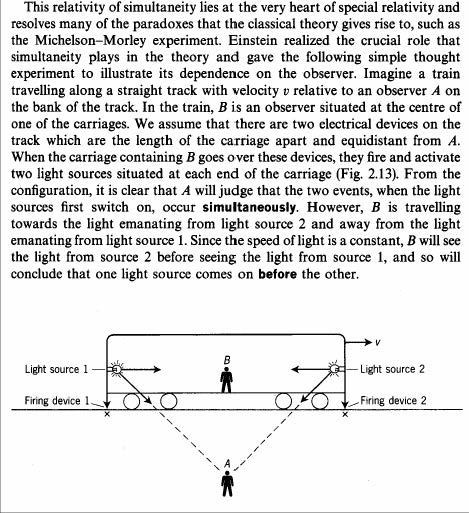 The point which the exercise was trying to make is the following:

A says: the two lights flash at the same time
B says: the light 2 flashes first, then light 1

The point is not that A sees that B observes light 2 first, but B sees the two lights simultaneously, in fact this statement is wrong. Image that this was the case. Let's assume that something terrible happens if B gets hit by two light at the same time, let's say B dies. If the lights hit B at different times, however, nothing happens. But now A would observe that B is safe and sound whereas B in his rest frame seeing the two lights at the same time would die. Dead and not dead at the same time? This is not possible and Schrödinger giggles silently in his tomb. The two lights hit B at different times in any rest frame

If you are interested in special (and general) relativity I can highly recommend you the Book by Lewis C. Epstein - "Relativity visualized".